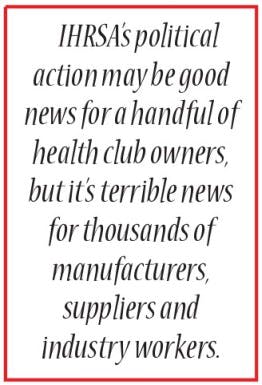 It's on the web site belonging to the International Health, Racquet & Sportsclub Association (IHRSA). The association's "Victory Scorecard," posted after Election Day last November, grandly takes credit on behalf of its member clubs for the defeat of voter referendums in Grand Junction, Colo., and Park City, Utah, as well as the ousting of a Hampden Township, Pa., commissioner who was a strong advocate of a proposed community recreation center. The site also asks IHRSA members to send along "local recreation vote results" so that future boasts can be posted.

To date, IHRSA claims countless kills, particularly among planned YMCA fitness centers. But its target has expanded in recent years to include municipal and even college recreation centers; IHRSA proudly notes that its members (all with the association's blessing, many even with association funding) have prevented the construction of 21 community recreation centers. This may be good news for a handful of health club owners, but it's terrible news for thousands of manufacturers, suppliers and industry workers. Those 21 would-be rec centers alone represent a huge amount of lost opportunity - scores of designs never committed to paper, hundreds of jobs lost and thousands of products unsold, from gym floors, basketball standards and exercise equipment to lockers, pool components and playground equipment.

On the face of it, there's nothing really wrong with a national advocacy organization helping to influence local events. And certainly, IHRSA's argument against building tax-exempt municipal and college recreation centers that compete with taxpaying health clubs has a '90s-style, streamlined-government appeal.

In our view, though, the unfair-competition argument is both an oversimplification and, in sports lingo, an errant shot. First, health clubs do not now, nor have they ever, owned a monopoly on offering fitness alternatives to community residents. Colleges, municipalities and YMCAs can boast gyms, pools, weight rooms and playing fields that predate the first health club by, conservatively, 75 years. Second, it is demonstrable that in most cases, colleges, municipalities and YMCAs serve a different clientele - or, at least, a broader spectrum of users - than a typical health club. Third, community residents and college students who do vote to raise their taxes or tuition clearly do not view their local health clubs as meeting their recreation needs.

Most of all, the argument is shortsighted and potentially damaging to the recreation and fitness industry. As noted above, it hits manufacturers and facility suppliers hard. But it also hurts facility owners - if not now, then later. Today's 14-year-old who is introduced to weights and stationary bikes in the community recreation center may well become an 18-year-old habitué of the college recreation center and then a 22-year-old - or 30-, or 40- or 50-year-old - enthusiastic health- or racquet-club member. Killing opportunities for recreation in an industry that knows it is not even reaching 20 percent of the country - well, that's just bad business.

Beginning in 1992, the Athletic Business Conference and the IHRSA Club Business Conference began sharing a trade-show floor every December. This was good business, giving facility owners a bigger product showcase and streamlining the trade show schedule for manufacturers and facility designers. Now, good business requires that we sever that arrangement - after November 2002, AB's association with IHRSA ends. In short, IHRSA plans to focus on its international expansion, while AB intends to continue helping this industry grow. Our beat - the construction, management and operation of athletic, fitness and recreation facilities of all types, under all banners - goes on.