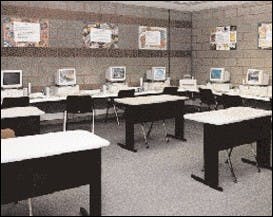 Six days a week, the Esther Snyder Community Center in Baldwin Park, Calif., uses its 18 computers to operate an Education Enhancement Program that serves approximately 300 kids a year. The classes are free for youth and are also available to adults for a nominal fee.

Through these classes, users can learn basic computer operations and more advanced programming skills such as the creation of spreadsheets. One 10-week course has teens researching possible career options and developing a presentation on their findings.

Although it was only recently that the number of computers was increased and the curriculum was developed, the facility has had a computer lab for almost nine years. Previously, the city contracted the community center out to the area's Boys and Girls Club, which provided six computers for drop-in use.

Few recreation facilities can boast such an amenity, much less one so long-lasting. But it may not be long before Esther Snyder finds itself at the forefront of a fast-growing trend.

Of the facilities that have or intend to add computer labs, most cater to a younger crowd - namely, Boys and Girls Clubs, YMCAs and youth and teen centers. For them, a computer lab is a logical step toward their common goals: to promote not only the health and physical development of youth, but also their social, educational and vocational development.

"There's a movement going on with Boys and Girls Clubs across the country to provide educational tutoring support for kids," says Rich Payton, executive director of the Boys and Girls Club of St. Joseph's County in South Bend, Ind. "For example, if they come in after school they have someone who can sit down and help them with their homework. Computers can play an important role in tutoring, helping kids to learn skills like spelling, typing and editing."

"I think this is an issue that a lot of places are grappling with," says Renee Davis, program coordinator at the Elliott Donnelley Youth Center (EDYC), a branch of the Chicago Youth Centers agency. "Community-based technology labs are going to be vital to making sure our young people are literate and well-rounded in the upcoming century. The public schools can't do it alone."

Davis co-founded a non-profit organization called Street-Level Youth Media, which worked in conjunction with the EDYC to develop programs and arts-related activities surrounding the facility's computer lab. Courses in literacy development, GED preparation, computer art and the Internet are among the offerings available to youth as well as adults. Davis is also part of a technology task force that is helping other Chicago Youth Center branches find ways to integrate computers and other communications technology into their curriculums.

Cost is the reason more facilities aren't already outfitted with computer labs, says Dean Ehrenheim, executive director of the YMCA in Murray, Ky., which operates its own teen center. The teen center program, an extension of the Y's existing afterschool program for younger children, does designate time to be used solely for homework, but at this point the center's one computer is equipped only for game-playing.

"The computer we have is a hand-me-down machine I brought from home. What I'd like to eventually have is a CD-ROM encyclopedia and Internet access for the kids to help them with their homework," Ehrenheim says. "Right now our teen center is still growing and we're not sure what the future holds. There's certainly a need, but we have to decide at what expense we want to meet that need. To go out and buy a few more computers would add thousands of dollars onto the expense side of a program I'm already subsidizing to the tune of about $9,000 a year."

Ehrenheim hopes to find a sponsor, someone who believes enough in the teen center's mission to donate computers or possibly contribute funds. The local board for the EDYC had the same idea, and applied for a grant that was being offered by IBM. Their proposal was accepted and IBM provided the EDYC with a 10-station computer network and software.

"IBM has since helped us write grants and raise funds to match that initial gift," says Davis. "We've also received money from the White Sox Foundation to upgrade the lab."

Other facilities have obtained their computers through local business and school sponsorships and through partnerships with city agencies.

For example, South Bend's youth center is shared by the Boys and Girls Club and NorthStar, a child-abuse prevention program, two of five agencies that fall under the administration of the Family and Children's Center. "In most areas of the country Boys and Girls Clubs are stand-alone organizations," says Payton. "But for us, this collaboration between human-service agencies provides more financial and administrative support. We serve between 220 and 275 kids a day, and that's an enormous number of kids to keep entertained Monday through Friday."

The Teen Center in Duarte, Calif., is itself a city entity. The majority of the center - a boxing gym, game room and multipurpose room - was funded through two Los Angeles County bonds. However, the bonds did not cover the center's 13-station computer lab.

"The computer lab didn't enter into the bond issue because it was considered equipment," says Donna Georgino, Duarte's parks and recreation director. "It was only when we came up with our own money, which was general fund money, that we were able to include it. During construction, we took what was going to be a television room and converted it to the computer lab."

Duarte also received donations of special software, including literacy, SAT tutorial and learn-to-type programs. Georgino says the lab has been a great success in the year the center has been open. "There are kids who do use them to play games, but most use the computers for homework, to do research, or to surf the Net. Others just like to play around with different things," she says.

Lionel Garcia, the center's new director, says the educational applicability of computers is good news to those seeking funding for computer labs. "Having an educational component in your facility really makes it easier to ask for grants and donations, and to get them," he says. "Communities are becoming more committed to turning kids into Renaissance individuals, of sound mind and body. We pretty much have that here."

Says Ehrenheim, "Providing classrooms, tutoring, computers - it's just another opportunity for us to do something that helps build strong kids and strong families."