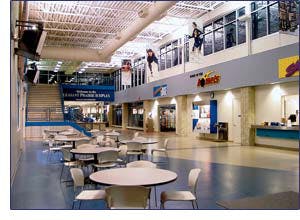 LakeView IcePlexThere are two very distinct sides to the village of Pleasant Prairie. Hugging the western shores of Lake Michigan and sandwiched between Kenosha, Wis., and the northern Chicago suburbs, Pleasant Prairie is both a sleepy bedroom community and a bustling commercial hub. Its residential population of 18,000 balloons to 30,000 each workday, as commuters from both the greater Milwaukee and Chicago areas converge on the LakeView Corporate Park and other regional employment centers.

Pleasant Prairie's popularity as a corporate haven has contributed to the success of the LakeView RecPlex and Pleasant Prairie IcePlex -- which, at a combined 260,000 square feet, are easily the area's largest public recreation centers. The RecPlex and IcePlex sit adjacent to the LakeView Corporate Park. Together, they boast 13,000 members, most of them area residents, with a small contingent hailing from northeastern Illinois.

"We're primarily a family organization, but we have a nice cross-section of consumers," says John Kruse, marketing director for the RecPlex and IcePlex. "We're also dealing with a good consumer base of higher-income people."

The potential buying power of that deep-pocketed consumer base has not escaped the notice of local and regional businesses. For that reason, the Pleasant Prairie Parks & Recreation Department -- which operates both the RecPlex and IcePlex as enterprises -- created the Value-Added Program, a multifaceted internal advertising package. Available at four price points ranging from $2,500 to $10,000, the marketing program provides businesses with the opportunity to advertise their products and services inside the facilities through static signage (either dasher boards or ceiling-hung banners), youth team sponsorships and commercial spots aired during primetime slots on the facilities' TV monitors.

Cathi Klaver, Pleasant Prairie's director of recreation, believes the six-month-old Value-Added Program is exactly the type of advertising opportunity that local businesses have been waiting for. "We're the largest club in the area and many people want to do business with us. We're able to leverage this little community of active consumers that we've created here," she says. "We developed this program because we had so many business partners come forward and say, 'How can we advertise within your facility and tap into your consumers?' "

Klaver is the first to admit that she's not in the advertising business. But delving into the unfamiliar territory of ad sales and marketing has become standard procedure for parks and recreation professionals, she says, especially with the expectation that municipally operated sports and recreation facilities nationwide be increasingly self-sufficient. "Because we run as an enterprise operation for the village, we're completely off the tax rolls, making it imperative that we look for creative funding sources," says Klaver. "I'm a recreation professional, and now we're competing in the media-purchasing market. I wonder, are we the ones who should really be doing this, or should we contract this out?"

Klaver is one of only three recreation department staff members charged with running the Value-Added Program, in addition to performing their original job responsibilities. "My challenge is getting a large enough sales force to really drive this program," says Klaver. "We just don't have the time to do the selling." In that light, one of the few obstacles preventing the expansion of the marketing program, which Klaver says has thus far encountered moderate success, is its requirement for advertisers to make an annual commitment. "We don't have the administrative resources to sell on a monthly basis -- and we need to package this as a monthly product," she says. "As we're talking to people about this, they can't really get their heads around these $2,500 and $5,000 price points, even though we walk them through it. If they purchased the same amount of print advertising in a local newspaper, they certainly wouldn't get the same amount of exposure and return on their investment."

The variety of companies to already come to that realization is impressive. Advertising within the RecPlex and IcePlex are businesses as diverse as health-care and physical-therapy centers, dentists, tutoring centers, grocery stores, car repair shops, telecommunications providers and retail clothing outlets.

Kruse concedes that among that group of advertisers, there are varying levels of media savvy. "Some companies are obviously sophisticated enough to have prepared commercial spots," says Kruse, who is assisted by a multimedia specialist formerly employed by Denver's Pepsi Center. "But if companies need services, we're here to help them in any way we can."

Generally, that assistance involves designing a 30-second ad that, depending on the value of the package purchased, will be aired anywhere from two to nine times per day. Advertisers are guaranteed airtime during the facilities' peak hours, which are from 4 p.m. to 9 p.m. weekdays and all day on Saturdays and Sundays.

These commercials appear on 13 TV monitors that were installed with the facilities' 2004 renovation and expansion. Originally intended to market the rec department's programs, the monitors are placed strategically throughout the RecPlex and IcePlex -- next to the stretching area of the second-level fitness center, in concessions areas, near seating outside the racquetball courts, at customer service desks, and in each of the facilities' lobbies.

"We're such a big facility that we felt we could put some television monitors up in communal areas where people hang out during dead time," says Klaver, who likens the tactic to that used in airports, conference centers and collegiate or professional sports venues. "You stick a television up and people are going to watch it."

And because it's nearly that simple, Klaver doesn't take credit for reinventing the wheel with her department's marketing program. Rather, she feels as if she and her colleagues have stumbled upon a rare opportunity to simultaneously showcase their facilities, establish strong ties with local businesses and generate much-needed revenue. "We've never been in the business of selling advertising," she says. "But I guess we are now."