One department proves that with a little imagination, the state park experience can be replicated inside a rec center. 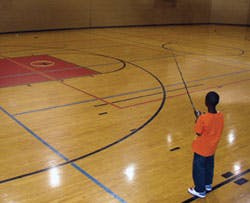 Mention the words bow, arrow, children and gymnasium in the same sentence, and most recreation providers are liable to shudder. But travel to community centers in downtown Fort Worth, Texas, and that combination may appear quite natural.

That's because of an innovative urban outdoor education program that has been taking place there for the past two years. Of all places, an inner-city community center in a renovated fire station in a high-crime area of the city's hospital district is where recreation programmer Shane Mize first concocted the idea of an outdoor recreation program for the neighborhood's children. The catch is that the teaching and learning of outdoor skills such as archery, camping, fishing and kayaking is being accomplished largely indoors.

Mize has since moved on to greener pastures - he's now the supervisor of Fort Worth's Greenbriar Community Center, which has the distinction of being in an urban locale (a downtown industrial district), and yet in an ideal location for outdoor education (it sits on a 50-acre property complete with a three-acre lake). It is in this environment that the program has flourished, and even begun to spread into other Fort Worth rec centers.

"I think urban outdoor education is something that we - as local parks departments and as a society - just aren't doing a good enough job of," says Mize. "Cities, especially, have always pushed that responsibility on to more suburban areas and state parks, and basically have said, 'Let the residents leave if they want to develop those outdoor skills.' " 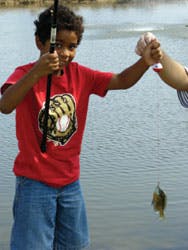 When Mize first approached a superior about launching the program, he was informed that there was no room in the budget, especially since the idea wasn't in response to a demonstrated community need. Thus began a fruitful partnership with the Texas Parks and Wildlife Department, which has since made the center part of several of its urban outreach initiatives.

Through a state fishing tackle loan program, which borrows from the public library concept, Fort Worth residents can check out fishing equipment stored at the Greenbriar center. Participation in the state's "Neighborhood Fishing" program has made the small Greenbriar lake one of just 12 in the state to be stocked every other week with trout and catfish, depending on the season. Mize also worked with the state to become an "anchor agency" in the joint National Recreation and Park Association and Recreational Boating and Fishing Association "Take Me Fishing" initiative. As a result, Fort Worth Parks and Recreation has benefited from $25,000 in outdoor programming and education grants over the past two years. State parks staff members have even traveled to Fort Worth to loan the department outdoor equipment and train parks and recreation employees how to teach outdoor activities and education.

"I have always been kind of an outdoor person, but that doesn't mean I feel comfortable teaching kids these skills," says Mize. "Texas Parks and Wildlife has some urban outreach specialists who were very excited that someone from a city had bought into the concept. They came out and trained my staff for free in archery, angling, boating and kayaking instruction."

The program was initially viewed with trepidation by some of the Fort Worth department's staff members. "There were people who already knew these skills and were afraid to ask about teaching them," says Mize. "Then we had people who had only ever heard about outdoor education, and they said, 'I don't want to do that at all.' " But one of the state's selling points to Mize and his colleagues was that virtually all of the outdoor skills - unlike many other athletic activities - can be further enjoyed by children and their parents outside the rec centers. In fact, one regular rec center day-camp attendee who excelled in archery received a full scholarship to attend an exclusive bow hunting camp this summer with his father.

Mize says staff members at 12 of Fort Worth's 18 recreation centers are now involved in the department's outdoor education program, meaning the bulk of the action is occurring indoors - even in the case of archery instruction, which follows National Archery in the Schools Program curriculum. Heavy-duty protective netting surrounding and separating three targets is set up in between basketball goals in the gymnasium, doorways are locked and posted with warnings and instructions, and participants are trained in advance in basic archery skills and how to follow a whistle command system.

"The parents at first were like, 'You're doing what? Indoors? Are you kidding me?" says Mize. "But we now have a good reputation; and the kids have a blast."

Indoor fishing lessons involve casting with a plug tied to the end of the fishing line. Participants can hone their casting accuracy by playing a game that assigns point values to targets such as Hula Hoops and buckets, and special molded fish replicas of various species mail-ordered from a Wisconsin manufacturer help with fish identification and handling lessons.

The camping curriculum features lessons on creating safe fire pits and leaving no trace behind, and one of the more popular games among rec department day-campers involves breaking into teams and seeing which group can more quickly and skillfully set up and break down a tent and sleeping bags. Kayaks are placed on blue gym floor mats and used to help teach children paddling techniques, as well as boater safety.

"I don't know if the kids are even thinking about the skills they're learning," says Mize. "But you'll see kids who have now cast 10 or 12 times but have never actually fished. When they go out for real the first time, casting is already natural. There's muscle memory; they feel comfortable around the tackle and the line." 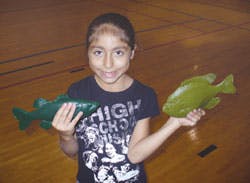 All these activities require equipment, not all of which can be covered by the grant money. Therefore, Mize and his staff have established partnerships with vendor sponsors for gear such as fishing poles. Sponsors have also chipped in to allow for field trips, so the lessons learned in the gym can be translated to more natural environments. "I see it as a challenge to find ways for these kids to apply these skills," says Mize.

Mize acknowledges that the outdoor education program may not benefit the highest possible numbers of facility users. (Indoor and outdoor soccer programs are far and away the biggest year-round draw at Greenbriar, which serves a population that is largely of Hispanic descent.) But Mize believes outdoor education is an important component in a full menu of recreation programming. "For me, the state parks have always been a kind of a learning tool," says Mize. "I have four kids, and my wife and I will take them to the state park instead of the mall because there are a lot of benefits - conservation, self-reliance, imagination - that kids can get in the outdoors. A lot of urban kids are never even introduced to that."