Hard-as-concrete vinyl composition tile still exists in gymnasiums and rec centers, but a proposed new ASTM standard could change that. 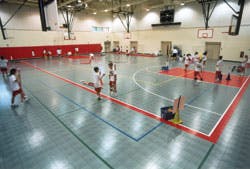 PLAY IT SAFESynthetic modular surfaces built for sports and a variety of multipurpose activities are gradually replacing vinyl composition tile in school gymnasiums.

Meagan Wiedeman, a seventh-grader at Leyton Junior High School in Gurley, Neb., died in 2003. But her story still makes an impact. The 12-year-old was practicing the high jump in a gymnasium that doubled as a cafeteria. Lacking a hardwood or synthetic sports surface, the space's floor was instead covered with vinyl composition tile - one of the most widely used commodities in North America and popular in school classrooms and hallways. It consists of 85 percent limestone, features the resiliency of ceramic tile and is by some estimates eight times harder than floors designed for active play.

Eyewitnesses that March day said Wiedeman launched herself over the high jump bar, missed the mat and landed on the floor, where she began to convulse. Rushed to a local hospital and then transported to a larger medical center in Fort Collins, Colo., she underwent surgery for complications from a skull fracture. Wiedeman was pronounced legally brain dead and passed away less than a week later.

"It seems pretty clear that a hard VCT-type surface is not appropriate for any area where active indoor play is taking place," says David Smith, who as director of corporate accounts for Connor Sport Court runs the risk of sounding self-serving. But Smith also is co-chair of ASTM International's Committee F06 on Resilient Floor Coverings, which is proposing a new standard for active-area multipurpose flooring. "Kids are doing activities like Meagan did on VCT surfaces all the time. There are hundreds of thousands of facilities across the country that have multipurpose VCT flooring, and the potential is there for serious injury."

Walk into the gymnasium at any elementary or middle school - not to mention church recreation centers, Boys &Girls Clubs or YMCAs - and there's a good chance of stepping on a VCT floor rather than a resilient synthetic or hardwood sports surface. VCT is particularly common in gymnasiums that double as cafeterias or auditoriums, yet it is not recognized as an actual sports surface by any entity. "This is not an issue specific to any one flooring manufacturer," says Smith, whose 8-year-old son recently tripped in a physical-education class and chipped his tooth on VCT. "We all know this is an issue we need to overcome."

"A lot of times the gym floor is the last thing to go in, and the budget is already overextended. So if budget cuts have to be made, that's one place to make them," says Dan Wollman, vice president of sales for SnapSports and one of the early developers of modular synthetic sports flooring. "You're seeing more synthetic surfaces being put in now than, say, 10 years ago. But it's still a very small percentage in terms of the total number of facilities."

Older facilities are even more likely to have a gymnasium with a VCT surface, which tends to lose traction after years of buffing and polishing. "When a lot of those VCT floors were put in place, facility operators really had two choices: they could put in VCT, or they could put in a hardwood floor," says Gabe Martini, sales manager for modular flooring manufacturer Mateflex. "But they could only afford VCT."

Today, facility operators don't have to choose only between VCT and much more expensive hardwood; modular synthetic tile and monolithic poured-in-place surfaces also are available - often for $4 to $6 more per square foot than VCT. But it is VCT's low price point (typically beginning at $1.50 per square foot) and ease of maintenance that drive the surface's popularity. "It can be cleaned, washed and waxed with the same equipment and the same process as hallways and classrooms," Martini says. "But a gym is not a hallway, and it's not a classroom. People aren't just walking around. They're engaged in physical activity."

The three most common sites of school injuries are playgrounds, athletic fields and gymnasiums, according to Safe Kids USA, part of a global network of organizations seeking to prevent accidental childhood injuries. Children between the ages of 10 and 14 account for nearly half of all in-school injuries, but little hard data is available regarding the number of stress fractures and other VCT-related injuries that occur at schools - primarily because most injury reports do not include the type of surface involved. Nevertheless, the floor (regardless of its material) plays at least some role in accidental fall injuries.

That's one reason why ASTM International is in the process of developing a baseline standard for flooring that seeks to reduce the chance of injury from falls. Flooring in schools and other institutional settings - including childcare centers and long-term adult care facilities - must not only be shock absorbent to reduce the likelihood of injuries during physical activity, but also firm enough to accommodate cafeteria tables, stages, pianos and other heavy loads. The goal, Smith says, is "to provide a more comfortable and less hazardous environment in areas where physical activity will take place without compromising the multipurpose function of the designated space. Most surfaces that are designed for active spaces protect from falls from at least two feet."

While the playground industry underwent massive changes in the late 1980s and early '90s, as concrete and asphalt were replaced with rubber tiles, poured-in-place synthetics or loose fill, a similarly sweeping transition from VCT to more shock-absorbent surfaces seems less likely. As Martini points out, playgrounds could be decommissioned until funding was available for upgrades; it's significantly more challenging to shut down a multiuse gymnasium.

Instead, change happens one floor at a time, and usually only after a serious injury occurs. Wollman cites parent groups around the country that have solicited donations from booster clubs and other local organizations and individuals to help cover the upgrade costs. He suggests that facility operators first have their VCT floor tested by an independent sports biomechanics lab to determine its resiliency and shock-absorbing characteristics and then make an informed decision about replacing it. Additionally, it wouldn't hurt to re-evaluate the kind of activities that take place on VCT floors; in the wake of Wiedeman's fatal injury, the Leyton Junior High School track team stopped practicing the high jump.

Ensuring that facility operators are informed is the key to making the transition from VCT to some type of designated sports surface, and ASTM's proposed standard would work toward that end. "You've got some old diehards who just won't research their options," Martini says. "Or you have a school district that has 10 elementary schools with VCT floors and doesn't understand why a new school should have something different. Going forward, there are going to be fewer schools that have VCT, because they will know there are other options out there to choose from."