By combining multiple student life functions under one roof, even small colleges can create campus buzz. 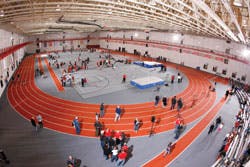 Unlike much of Indiana, the Purdue University North Central campus offers the rolling topography of a glacial moraine - a patchwork of prairie, wetlands and woods. What it doesn't offer is a gymnasium for its basketball team, which plays games in leased auditorium space 12 miles away. Nor does it offer civic groups in and around Laporte County a destination to hold meetings with any more than 125 attendees. With no place to hang out between classes, students often kill time sitting in their cars.

All of these deficiencies are being addressed in the blueprints for a $35 million student activities building capable of hosting athletic events at one end and a sit-down dinner for 500 at the other, perhaps on the same evening. The hallways in between will teem with traditional full-time students, who now comprise 67 percent of the enrollment at what has historically been considered a commuter school, as they traverse the facility en route to the student government office, the karate club or the spacious, state-of-the-art fitness center. At least that's the vision of PUNC vice chancellor of administration Stephen Turner.

"Something that's highly desirable is for the community members using this facility to see our students and feel the buzz that they bring to it," says Turner, who hopes to see ground broken next year. "It's a much different feel than when a group of folks from the local chamber of commerce comes to a conference center that's beautiful but quiet. I don't ever want people to walk through our building and not feel that student vibe, that warmth and that energy. They need to feel that as soon as they walk into our building. This is a great way to accomplish it."

Schools of modest size have already discovered that combining multiple campus functions into one hybrid hub of student and community activity is a great way to accomplish their goals.

North Central College in Naperville, Ill., sought additional student housing and expanded recreation and sports facilities for the school's 2,333 full-time undergraduates. But all the landlocked campus had to accommodate both needs was a single plot of land. The resulting design solution wraps four floors of primarily student living space around the Al B. Carious Track, a 180-by-330-foot multipurpose recreation arena capable of hosting NCAA Division III indoor track and field meets.

Upperclassmen claimed all 265 available beds in short order last fall, with single- and double-occupancy rooms of identical size separated from the arena wall by a corridor, gang showers, stairwells and "neighborhoods," where students can gather to socialize, study and survey activity in the arena below. A third-floor suspended walking/jogging track complements the six-lane, 200-meter track on the arena floor, and supports temporary balcony seating during meets (the first of which was held in January). Enough room exists within the competition oval to accommodate field events, including throws, and the infield's four multipurpose synthetic courts serve recreational basketball, volleyball and tennis participants. 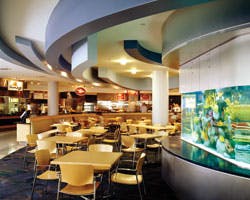 DINE AND DASH The food court within Nova Southeastern's University Center allows students to fuel up for their recreational pursuits.

"We call it a lifestyle building," says Mike Hudson, the college's assistant vice president for business operations. "There wasn't a student who didn't want to live there."

The fourth level remains roughed in as future residential space, Hudson adds. As it stands, the building cost $25 million. "It's very inexpensive when you think about it," says Tom Buchar of Buchar, Mitchell, Bajt Architects Inc., the Joliet, Ill.-based firm that made North Central's unusual design concept a reality using insulated precast concrete panels and a geothermal well system that should help the building garner LEED Silver certification. "If you tried to price this building as a standard arena and a standard 250-room residence hall, you're probably in the $40 million range."

Wrapping a big-box arena with a residence hall not only succeeded in eliminating exterior walls on one of the facility's components, it reduced the building's perceived scale considerably. "This is really a unique building, because everything came together," Buchar says. "It was a combined use that happened to present itself. They needed to do two buildings in one, and the site was just right - not too big or too small."

While such a building model won't fit the available space and programmatic needs of every campus, other types of hybrid facilities are growing increasingly popular. Single facilities now often incorporate competition and recreational gyms and fitness space, student unions with student activity offices and meeting rooms, and even food courts. Janet Jordan, senior recreation planner at architecture firm Moody-Nolan Inc., draws upon her background in public recreation when looking at such campus combinations. "Collegiate recreation typically is focused on active recreation - the gymnasiums, the group exercise rooms, the fitness areas. But passive leisure activity on a college campus - leadership kinds of programs or those times when students aren't sleeping, working or going to school - has often fallen under the bailiwick of the big union," Jordan says. "It's good to have a balance of both, and that's what the hybrid student center starts to do. It combines both active and passive leisure activities, and it actually comes much closer to the model of a community rec center."

Nova Southeastern University serves roughly half of its 27,000 students on its main campus in Ft. Lauderdale, Fla., which since 2006 has included the University Center - a 345,000-square-foot facility housing an arena, a student union and a wellness and fitness center. Prior to the facility's opening, the campus had to a large degree lacked all three elements. The NSU basketball team played its home games at a community college across the street, and the 4,000 square feet of fitness space that once stood on site was razed in favor of the 90,000 square feet dedicated to that function in the new building. Additional amenities include a food court, academic rooms for dance and theater and the university's campus card office. "So really, every student needs to get into this building at one point or another," says director of campus recreation Tom Vitucci. "We thought that was important, to bring all the different types of students to one destination."

The University Center is the first stop on all campus tours, and Vitucci credits the facility, at least in part, for annual increases in student enrollment, particularly among non-commuting undergraduates. "I definitely think it does what we hoped it would, from the standpoint of bringing students together and providing services and resources that weren't available before. There's a synergy and an energy that this building always has that the campus really didn't have before."

INTERACTION Purdue University North Central is counting on a new campus center to bring students and community members together.

Constructing one building (for $64 million), versus two or three over time, not only translated to cost efficiencies in labor and bulk purchasing of materials, it expedited occupancy. "We started construction 24 months prior to opening," Vitucci says. "We did open the building in phases, but my bet is that if we did it one building at a time, we wouldn't have all of them yet. So I think there's a value, too, in that you get it faster by doing it all at once."

His lone caveat: Don't shortchange the future. From the facility's planning stages to the present, the NSU athletic department has added five sports, crowding fitness space during peak student-use times to a greater extent than Vitucci had envisioned. "Plan not only for what you have but what you think you'll have, and build a building that you can grow into," says Vitucci, who has been at the school 11 years. "There are always things that come up that you don't expect - new programs you want to do, new staff you want to hire. We're not going to knock this place down anytime soon."

Nor should they want to. Founded in 1964, Nova Southeastern is just now starting to feel like a "real school." That's the buzz among students, according to Vitucci. "When you have a facility that is all-encompassing, it definitely contributes to greater student engagement," he says, evoking a current buzz phrase within higher education circles. "Students now have a place. It's a place to feel proud of. You're proud to be an NSU student in large part because you see all these wonderful things that happen in this building. If it were three or four separate entities, you wouldn't see it in this magnitude."

That's just the type of dynamic Purdue University North Central hopes to foster with its new hybrid facility, allowing PUNC to transition from commuter school to full-time student destination. "Our campus is just evolving to serve that demographic of student, and that makes even more pronounced the need to have a place where we can conduct intramural activities or host our own athletic events," Turner says. "We'll see our graduation rates go up because of this building. I don't wish to overstate that, but we know that the leading predictor of student retention is the degree to which people have connected with others on campus. So the more involved students are in activities, the more they feel that they have people here who they know and who know them, the more they are likely to return to school."

The inclusion of a 1,000-person-capacity conference facility will fill another, equally glaring campus void, according to Turner. "We've been hampered by our limited ability to reach out to members of the community and treat the campus as a host of economic development, engagement and outreach," he says. "We receive many requests every year from local organizations that we simply can't accommodate, and that's a shame. We're a land-grant institution; that is exactly our charge."

Conversely, Turner adds, "We don't have enough demand to build a very large athletic structure and dedicate it exclusively to that use. It's necessary for campuses of our size to be flexible in the use of space and open to the idea of commingling functions. This really is an ideal mix."