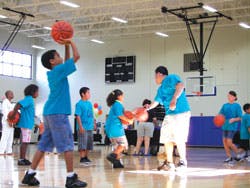 BEATING THE HEAT Programs at the temperature-controlled gyms that opened in Orange County, Fla., this summer quickly reached maximum capacity.

Read any of the Orlando Magic's marketing materials surrounding the opening of the Amway Center - the city's $380 million, 20,000-seat downtown arena complex - and you'll see repeated use of the word "community." A sponsorship campaign that led up to the official Oct. 1 unveiling of the state-of-the-art arena made huge corporate sponsors such as Disney Parks, GEICO and PepsiCo "Champions of the Community" in their financial support of the Magic and the Amway Center.

Although the idea of such global brands paying other global brands for recognition may not actually engender a sense of community, a relatively small but critical part of the financing deal that made the new Amway Center possible is making a big impact on numerous Orlando-area communities.

"This has been good for everyone," says Orange County Parks and Recreation manager Matt Suedmeyer, referring to five recreation centers that have either opened or are soon to open as a result of the deal. "We get the recreation centers, and the Magic have gotten two things - money to help develop the arena and an opportunity to give back to the community."

The recreation center component goes back to 2006, when Orange County mayor Richard Crotty presented an initiative called "Invest In Orange County - Our Children's Legacy," in which $530 million in proceeds generated from an unexpectedly large increase in taxable property was planned for numerous infrastructure needs and environmental preservation.

The county had experienced tremendous growth in population at that time, yet the parks division owned no gymnasium space at which to provide much-needed indoor recreation programming. Thus, $30 million was earmarked to fund the construction of five new community rec centers in five of the county's most recreation-deficient urban areas.

That funding opportunity was stripped away a year later after the passage of statewide property tax reform, which put a halt to municipal capital improvement projects throughout the Sunshine State. At the same time, the Magic organization was trying to find funding solutions for a new arena. The city was likewise trying to obtain funding sources for the arena and two other major downtown projects - a $408 million performing arts center and $175 million in renovations to the Citrus Bowl.

With those projects in mind, the Magic and the city considered increasing the Tourist Development Tax (TDT) - levied on hotel stays and car rentals - that since 1978 had primarily been used to construct, expand and operate the Orange County Convention Center. The county mayor and board of commissioners agreed to the inter-local tax increase, given the following condition: The Orlando Magic had to provide funding to construct the five previously planned community recreation centers.

At present, the Amway Center has opened for the Magic's 2010-11 season, and the fifth and final county recreation center is expected to come online in December. And according to Suedmeyer, the narrative to this point has been far more about a sense of community involvement than about corporate brand recognition or government levies on tourists' hotel stays.

"The people with the Magic have been great community partners," Suedmeyer says. "They really understand the importance of these recreation centers and they've dedicated a lot of their organization to this kind of community outreach and working with at-risk children."

Serving at-risk populations was not necessarily one of the criteria used to select sites for the five new rec centers. In addition to identifying neighborhoods that were the most lacking in facilities and programming, Suedmeyer says, "We didn't want to have to purchase any additional land, and so we looked at our existing parkland and infrastructure - staff and utilities."

This budget-conscious way of thinking points to the fact that although the Magic agreed to build the facilities, the onus is now on the county parks and rec division to program them and pay for their operation. Considering county-wide budget woes have forced the loss of 13 employees in Suedmeyer's division alone, that can be tricky business.

Some savings have been realized, as the parks and rec division formerly had to pay rental fees to local schools in order to offer any indoor gymnasium programming, including summer camps, after-school programs or youth sports leagues.

The division also sells annual adult memberships to the new facilities - each of which is approximately 24,000 square feet and features a 12,000- to 14,000-square-foot gymnasium, locker rooms, offices, meeting rooms that can also serve as group exercise rooms, game rooms and small fitness centers. A $100 annual membership gets adults access to the locker rooms, the open gyms and the fitness centers.

Suedmeyer points out that the fitness centers are small compared to what might be found in most health clubs and larger recreation centers, and that more memberships are driven by the demand to access the open gym space. Children are given free access to the gymnasiums and game rooms.

The two centers that opened this summer allowed participants in the county's summer youth programs to, for the first time, have a clean and controlled recreation environment that is protected from central Florida's sweltering heat and occasionally violent thunderstorms. There are already twice as many people on next year's summer camp waiting list as the program can accommodate.

Between such youth programs, adult athletics and group exercise programs, open gym and facility rentals, the three rec centers that had opened at the time of this writing were already operating at maximum capacity.

Suedmeyer says his department had been feeling the pressures of such demand for years, and he's grateful that certain parties with access to funding - including the mayor, the county board and the Magic organization - have been willing to recognize and react to those pressures, too. "People see and understand the value in these centers," he says. "Before, there were not a lot of things for kids to do if they wanted to be with their friends, socializing and recreating in a safe environment. Now these kids have something to do in the summer or after school."