Why Public Rec Center Renovations Must Be Done Right

On Dec. 19, 2009, the staff and patrons at the Lynnwood (Wash.) Recreation Center threw a party. After all, it would be the last time everyone could really celebrate for awhile 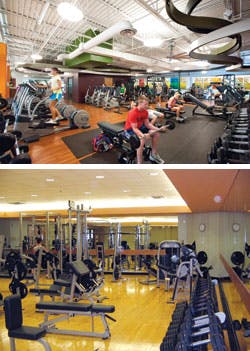 On Dec. 19, 2009, the staff and patrons at the Lynnwood (Wash.) Recreation Center threw a party. After all, it would be the last time everyone could really celebrate for awhile. The next day, the 33-year-old building closed for more than 16 months to undergo a massive $25.5 million renovation that would add almost 45,000 square feet - including new fitness spaces, a recreation pool with two water slides, a lazy river, a wellness pool and a partially retractable roof over an existing lap pool. Dozens of part-time staff members were laid off and thousands of members were displaced until the facility reopened, bigger and better, on April 28, 2011.

"That was the first time we'd seen a public recreation center shut down for that length of time," says Ken Ballard, president of Ballard*King & Associates Ltd., the Highlands Ranch, Colo.-based consultancy that worked on the Lynnwood project. "Obviously, you want to avoid doing that if at all possible and keep the facility up and running by doing the renovation in stages. But phasing a project almost invariably costs you more money and takes longer."

Katie Anderson, assistant director of the Lynnwood Recreation Center, says her staff had no choice but to close the facility. Remaining open while an estimated 90 percent of the building was demolished and rebuilt would not have been feasible. Staff members accommodated some patrons by offering them fitness and classroom spaces at a nearby city-operated senior center, and an administration building next door became home to a temporary weight room and several adult and child programs. Staff also contacted competing public and private facilities in the area to see if accommodations could be made and possible discounts provided for Lynnwood residents, and then provided all recreation center users a list of those facilities.

But despite all that - plus creative and highly visible signage, online notices, media reports and face-to-face reminders - "we still had people bringing their workout bags to the building, which had a temporary eight-foot chain-link fence around the perimeter, and asking the contractor what was happening and where they should go," Anderson says. "So people still weren't in the loop." 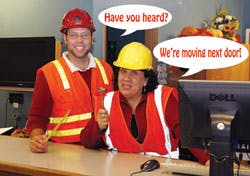 The decision to phase a municipal recreation renovation project or to temporarily close the facility is among the biggest that a public recreation department has to make. And unlike a college recreation center renovation, there does not exist a three-month window of opportunity for major construction to commence during the summer break.

"Sometimes shutting a facility down for six months and then opening it as a brand-new facility is still better than two years' worth of inconvenience to the users," says Chris Kastelic, a principal at Sink Combs Dethlefs Architects in Denver, citing noise, dust and dirt, temporary parking issues, highly visible construction crews and other disruptions that commonly occur when a facility remains open during construction. "So you either have to disenfranchise a certain number of people by closing down programs that they're used to having or you need to find a way to phase things in."

The Belton (Mo.) Parks and Recreation Department opted in 2006 for a multipart phased renovation of the High Blue Wellness Center - an $8 million project finally completed in 2009. "Closing that thing down would have been a death sentence," says Brian Adams, a senior associate at Kansas City, Mo.-based WNB Architects.

The first phase resulted in minimal disruption of day-to-day operations and included the conversion of underutilized community rooms (originally intended to be a major revenue source) into high-use multipurpose studios that can accommodate both group-fitness classes and private meetings. The second phase included a complete renovation of the upper-level wellness floor, with new lighting, surfaces, wall finishes and curvilinear ceiling accents adding vibrancy to a space that previously was "drab and confining," Adams says. "This remodeling could have caused quite a disturbance to the members, but it was handled by providing temporary power in a portion of the gymnasium and moving all of the cardio equipment downstairs. A new computerized personal training system was installed at this time, and staff used what could have been downtime as a time to train their patrons in the use of the new system. This was a huge success."

With renewed interest in High Blue, membership was on the rise by the time WNB proceeded with the third phase: a natatorium addition with a six-lane, 25-yard competition pool and diving component with seating for 200, and additional elements that meet the needs of recreational aquatics participants. The location of the new natatorium allowed the existing facility to remain fully functional until the final weeks of the project.

Lynnwood Recreation Center employees, on the other hand, tried to ease the pain they knew their users would feel by staying in touch with them throughout the renovation process. While informing patrons of the building's impending shutdown, aquatics supervisor Bill Haugen learned a lot about the type of users attracted to the recreation center - and its aquatics program, in particular, which at the time was overseeing an estimated 7,000 swim lessons each year. "We discovered that the pool was really about social connections, and we tried to maintain them during the shutdown with potluck dinners, group meetings, and personal phone updates," Haugen says. "We tried to stay in touch with everybody."

The result: Sixty percent of those patrons returned 16 months later, "which was a better number than I thought we were going to get, even despite all of our efforts," Haugen admits. "I was expecting somewhere closer to 40 or even 30 percent, because I believe that once people find themselves in a new home and they get settled, they get settled. But what was really happening was our old customers were recruiting new customers."

Now user numbers have increased considerably, and programs fill up faster than ever. A weekday in late August was the first time since the center reopened in late April that the facility did not sell out its 300 daily open-swim passes. And many former employees also have returned, after undergoing the interview process all over again. Says Haugen, "It turned out as well as it could have for us."

Operators of the Lynnwood Recreation Center are pleased with the decision to transform an indoor/outdoor pool lap pool into a permanent indoor structure with a translucent, partially retractable roof. (Photos by Ben Benschneider, courtesy of NAC|Architecture)

Even though municipal recreation center renovation has slowed down the past three years because of the weak economy, Ballard says projects designed to improve sustainability - including replacing heating and cooling systems and upgrading windows and lighting - are on the rise, largely because funding sources are readily available in the form of rebates, grants and incentives.

Additionally, while many public facilities built in the 1980s and '90s may still be well maintained, their allocation of space for seldom-used racquetball courts and a fitness floor that is, say, a quarter of the size it should be in 2011, make them (in Ballard's words) "woefully inadequate."

"In some respects, that's more important than in the collegiate sector, because the utilization of public facilities is a discretionary use of people's time and money," Ballard says. "So if they don't find your facility relevant anymore, people will seek out other alternatives. You need to continue to invest in your facility, or you will continue to slide further down on your cost-recovery rate."

"What is obsolescence?" Kastelic asks. "Obsolescence is when your facility can no longer accommodate users' needs in an optimal way. It's easy to define when you have a pool. If I only have an 8-foot-deep pool and want to run a diving program, my pool is obsolete - for that activity. But can I still hold lessons? Sure. The limits of a building should be the programming creativity of the operators, not the architecture."

But when that architecture fails to deliver, renovation (even on a small scale) may be necessary. In addition to determining whether to phase the project or shut down the entire facility, public recreation center operators need to address other questions before embarking on a renovation project. Here are three to start with:

Renovating a public recreation center is always more challenging and complicated than building a new one, according to Kastelic. But the results don't have to be any different. "I don't think there are inherently good renovations and inherently bad renovations," he says. "It's all about being realistic about what your budget can do and what will be accomplished. At the end of the day, the operators just want to move into a nice building. They just want the key. But it's the process they go through that sets the stage for success."