(Rendering courtesy of 360 Architecture)There are plenty of valid reasons for this, having to do with realities of budgets and building plans, but there are many reasons to bring the track into the foreground, too. Over the past decade, a number of high-profile and highly regarded recreation centers have been built that do so, from a track that meanders through program spaces to one that soars through the upper reaches of a natatorium in a glassed-in tube. There's even a track that breaks through an exterior wall on a curve, reentering the building before the straightaway. But until now, no one had created a jogging track that inclines and doubles over itself like half of a figure eight.

The walking/jogging track at the new Auburn University Recreation and Wellness Center, which opened in August 2013, is presumed to be the country's longest, at one-third of a mile, and is attracting significant attention for what the university's rec department refers to on its website as the track's "corkscrew configuration." Make no mistake, this particular track was made possible by the project's size (240,000 square feet) and construction budget ($53 million). Its influence is sure to be felt in buildings a lot smaller and less grand, however. Auburn's track stands as a testament to how these components can be better utilized as signature program elements in all types and sizes of recreation centers. 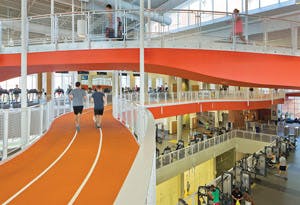 RUNNING IN PLACE
Tracks in many rec centers appear as afterthoughts. The reason isn't lack of vision by owner or designer, but simply that the most logical and cost-effective place for them is suspended around the gymnasium's two-story space, in building volume that would otherwise be wasted. Such tracks are utilitarian at best — four straightaways, four sharp left or right turns (depending on the day of the week). It's no wonder that many older tracks end up underutilized.

Rec center design has come a long way in 20 years, and advances in glass in particular have given designers a way to open up the gymnasium box to allow runners glimpses or extended views of the world outside the gym, whether of the surrounding campus or the building's other internal spaces. These windows also serve the secondary purpose of showcasing activity.

And so jogging tracks by and large remain confined to the gym — which is a shame, because tracks are particularly good elements to bring the message of activity to the wider world. Climbing walls have recently served most often as the grand rec center statement, soaring into big-volume atrium space or inhabiting glassed towers designed specifically to elicit "Wows" from passersby, but whatever their grandeur as structural elements, climbing walls are static, and climbers appear at a glance to be pinned to the surface. Runners, on the other hand, are in constant motion, and runners flashing by exterior windows can't help but attract the eye.

Moreover, tracks are people movers, and a track that moves people through the entire facility serves a facility owner's larger purpose of engaging people in activity and suggesting new activities for them to try by exposing them to the rest of the rec center program. Simply put, it is hard to overstate the value that a signature track can bring to the overall program. 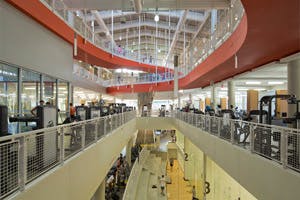 MOVING FORWARD
Auburn's students requested something distinctive, something that would set its rec center apart from every other, and they considered a track desirable because it would give them a safe place to run at night, when the majority of fitness activities take place. The large-volume space allowed designers' minds to fly free, and several track concepts were developed. Among the more high-concept plans was a Formula One-style track featuring tighter, hairpin-style turns and a more compressed, "competitive" circuit. In the end, the students rejected Formula One in favor of what they've begun calling "Hot Wheels" — suggested by the design decision to highlight the track throughout the space in the AU color of burnt orange.

Beyond its striking color, the track has a number of unique characteristics that suggest a possible new path ahead for jogging tracks:

• Ramped Up. The track has to rise through the space to an additional loft level and back down again to achieve the crossover. In this way, the track begins to function as fitness equipment, specifically a treadmill and its ability to offer interval training. Part of the new era of tracks has them becoming an element that is part circulation, part apparatus, allowing building owners (and users) to do more with less.

• Distance Running. The number of laps per mile has normally been a function solely of the size of the gymnasium it winds around. The Auburn building is particularly large, but the existence of large atrium spaces in many rec centers suggests a way to gain additional distance by taking advantage of these buildings' vertical dimension. 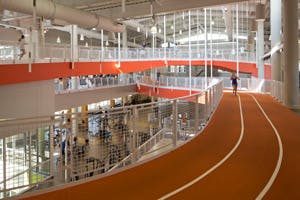 • Freedom of Choice. The other side of the Auburn track is suspended above adjacent four-court and two-court gyms, and circles them entirely, so that different routes are available to walkers and joggers. The full one-third-mile track circles both gyms; track users can choose to circle the two gyms separately or together for ovals of different distances, or run the crossover and return by way of the first intersection. The track itself is striped — the standard three lanes, two for walking/jogging side by side and one passing lane — in a way that merges runners through the intersections and discourages runners from going against oncoming traffic. Designers also specified a system of low-tech stoplights along the straightaways to further ensure that all traffic goes in the same direction.

• Turn, Turn, Turn. As noted, standard tracks feature all left turns or all right turns. The corkscrew portion of the Auburn track is a long, graceful curve that runs in the opposite direction of the tighter radii elsewhere on the track. This spells greater comfort and variety for users — results that, if the corkscrew catches on, will likely be requested by future jogging track owners.

The simplicity of running — just lace up your shoes and go — is possibly to blame for many tracks receiving only cursory attention from designers. When you see the way a track can transform a space like the Auburn Recreation and Wellness Center, you realize how shortsighted that is. The corkscrew is a "Wow," no doubt about it, but beyond that, Auburn's jogging track is what connects the four large volumes and knits together all the different neighborhoods within them. Users walk under it at the entry and they're never disconnected from it: The track crosses and flies overhead, the one program component seen at every level.

This article originally appeared in the January 2014 issue of Athletic Business under the headline, "On an Upward Track."