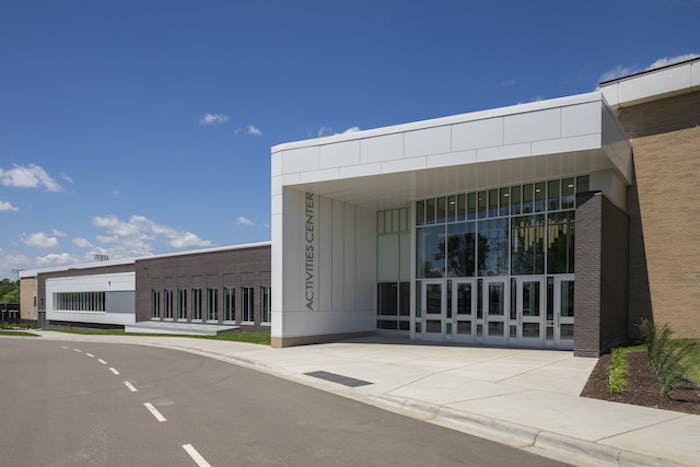 In 2016, voters in the Orono (Minn.) School District approved a referendum that paved the way for the district to build the Orono Activities Center, which opened in February of 2018. The nearly 100,000-square-foot facility serves both the local high school and the general community through membership. Athletic Business spoke with John Morstad, the district’s director of business services, about the project and how working with Mondo helped to create a flexible, durable facility that the community has enthusiastically embraced.

Can you give us a brief description of the project? 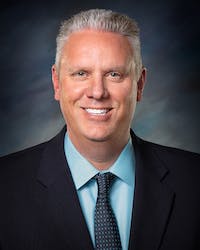 John Morstad, director of business services, Orono (Minn.) Public SchoolsThe project went to our voters in November of 2016 and was approved as a $27.4 million activities center addition. The real need that it filled for us is a couple of things — one, the district was woefully lacking in gymnasium space. We had a few, but we're a district of about 2,800 kids, and we had very few full-size gymnasium spaces. It added that component very considerably for us, because we added five full-size courts. Number two, we represent six small communities in the Western metro of Minneapolis-St. Paul, but they're pretty small cities of 7,000 people or 4,000 people, things like that. None of those communities had a community center or a centered gathering place. The other main goal of ours was to create that for our community — to provide a gathering place where folks could come in, exercise, meet and just socialize if they'd like to.

And what was your level of involvement as far as planning the facility?

Within my first month of being here, the decision was made to go out for this referendum. That became a very focal point of my job, to help get that referendum passed. Then from there, I was on the task force to plan what the facility would actually look like with our architectural firm, and then all the way through construction management until the grand opening. The main staff that run it report to me.

These opportunities come along rarely to make a dramatic impact on a school district, and we wanted to make sure that we did it well, and that in the future people will look back on the decisions we made and say, 'This is a great facility, this serves our needs, this is going to be great for students and great for the community.'

So, there's things like, as an example, the flooring that Mondo helped us with — we wanted to go with a top-of-the-line product because we knew it was going to last.

It sounds like that dual-purpose, serving both the community and the school, was really top-of-mind.

Correct, and one of the unique things about it — in many cases when an activity center is built onto a school, it becomes part of the secure perimeter of the school. In our district, it's not. It is a public space that is public all day, every day. So it's open from 6 a.m. to 10 p.m. most days, when the public is using it constantly, and then we would have students and staff who would leave the secure part of the high school and come into the public area and mix with the public at the time, and depending on who's using which parts of the facility, and then the students and staff can go back through the secure entry into the high school for their next set of classes.

We did a lot of research and looked at a lot of other facilities, and one of the biggest requests that we found from community members was access all day. A number of other districts near us have that facility, but it's closed during the day because it's part of the school.

What kinds of amenities are in the space?

The addition was just under 100,000 square feet. So, there's a fieldhouse that has five full courts. It includes a 200-meter competition track, so you have that track on the main floor, and then there's an upper-level 3-lane walking track, as well. We have a 3,500-square-foot weight room, and then also a 2,500-square-foot fitness room, and a kind of community locker room area on the upper level. And then it has four multipurpose rooms that can be used as either classrooms, or like a yoga studio/workout type of room that are interchangeable [with Mondo's Advance product]. 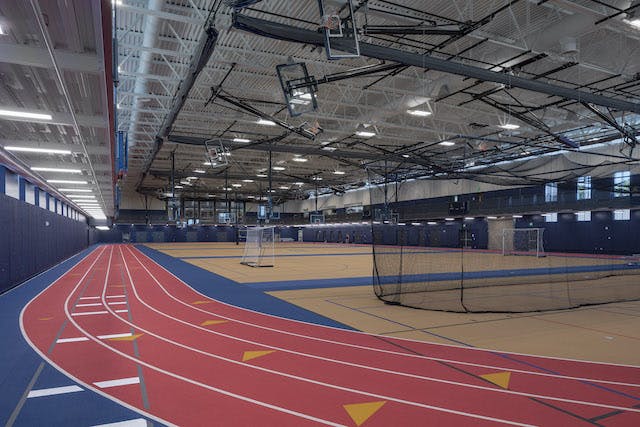 What kinds of programming are you able to run out of the facility?

We sell memberships to our community to be able to come in and use it like a fitness club,  and that's where the use is throughout the day. And we ensure that that rate is a very affordable rate for our community. A single membership averages $20 a month for unlimited use of the facility.

We've hosted indoor competitions, high school league-sanctioned track meets. With five courts in addition to the two main high school gymnasiums where the two facilities connect, we have 7 gyms right next to each other. So we can host a lot of larger tournaments, and then of course build concessions and have the facilities to support that. We've had basketball tournaments, volleyball tournaments, I think we had some futsal, soccer tournaments where they're running all five courts at once. A number of those things.

From a programming standpoint, our community department runs a lot of the additional programming. They have a pickleball league that's playing in there every week, and then they're managing the fitness classes themselves, and a lot of those other pieces. And then our sports programs obviously use it as well, for training all winter long and during their seasons.

You mentioned Mondo, what about them or their Sportflex M, Super X 720, MondoArmor and Advance products stood out to you when you decided to work with them?

Well, number one is quality. The quality of the products they offer is exceptional, and we wanted to make sure that we had that.

The three middle courts [Mondo's Sportflex M product] have a kind of medium-grade material, there's a little bit of texture to it. It's not super smooth because we're trying to maximize the different number of events or activities that can use the facility. So if you make it really smooth, that doesn't really work for baseball or something like that. If you do it really thick, that's only going to be for track for the most part. So, we kind of found the middle, and did the three courts in the middle with that medium-grade. The two outer courts — and the track overlaps a little bit of those outer courts — those are the Mondo track-grade surface [Super X 720], so you can actually wear spikes on that, and it won't damage it whatsoever. So we felt that would give us the most flexibility to get the maximum use out of that part of the facility.

From there, as we went into other areas, as an example, the weight room — Mondo has a weight room floor [MondoArmor] that's designed to handle the beating and abuse of dropping free weights. A big part of that, and I know when we were talking with them, they touted some of the sound absorbency, but I really didn't get it until it was all in, and you saw like a basketball tournament going on in there and it's unusually quiet. For a facility that size, you look around and you say, 'Shouldn't there be more noise than this?' When there are four basketball courts going full boar. But it's a bit of a testament to the floor to be able to absorb that much sound.

Were there any other considerations?

We looked at poured floors, and my concern with poured floors more than anything is if one section wears out — and obviously there are different parts of this that are more heavily used than others — you have to replace the entire floor. That's the only way to do it without getting a seam. Our main floor is something like 66,000-square-feet, so that's a big expense.

What was Mondo like to work with throughout the project?

It was seamless. They made it really easy for us. One of the things when you're dealing with a facility of that size is the help from a contractor to just point out suggestions. ‘Hey, have you considered this as an option, have you considered that as an option? Not trying to steer you in one direction or the other, but just to make sure that you know, because I'm not a flooring expert. I need the help of that contractor. We knew we had generally the floors we wanted to do, but we needed help with a few of those other things. Like with the track on the lower level, the lines are what get chewed off right away, because of us allowing track athletes to be wearing spikes. So it's the difference of Mondo suggesting that we inlay the white track lines, because then they're solid lines all the way through the floor, so even as they start to wear you'll never notice.

It was easy to see, from being a finance guy, the cost-benefit analysis of, ‘Hey, it'll cost you this amount to repaint your track every three years, versus this amount that will last for 25 years to just inlay those lines.’

How about since the facility has been complete?

I'll give you an example, this is nothing that Mondo did, but one of the motors on one of the basketball hoops had a malfunction, and it spilled hydraulic fluid on the Mondo flooring and stained it. From a customer service standpoint, Mondo came right in, they helped us get it pulled up, put down new flooring, no problem. They couldn't have been better from a customer service standpoint.

Here's something that was not their mistake in any way shape or form, but they jumped right in and helped out, and helped get it fixed — and very quickly, working around our schedule.

The interesting thing is that when this facility passed, it passed by 11 votes. So now, four years later, I think you would struggle to find 50 percent who said, ‘Yeah, I voted no on that.’

The feedback from the community has been overwhelmingly positive in that we want the community to use it, we want them in the space. We get this great sense of a connectedness, especially from retirees who don't have kids who might be in the district any longer — they have a way to stay connected to the school because they can use this facility, and they're intermixing with current athletes and students in there. That's always been a big plus, that we can provide that interaction between them.

I know one of the facts that really shocked us was, we were hoping that after being open for a year we would have 500 memberships sold for the facility. We have sold over 2000. I think we have about 4,400 actual members to that facility now.

It was quite a fun project to be a part of.