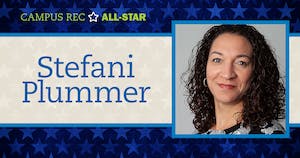 Stefani Plummer, director of academic operations at California Baptist University, has worked in campus recreation for 28 years. She holds a Master of Science in Recreation Management and has been an active member of NIRSA: Leaders in Collegiate Recreation since attending her first NIRSA Annual Conference in 1996. Stefani says, “My involvement in NIRSA grew as my career did.”

Like many in the field, Stefani’s journey in campus recreation began as a participant in rec programs at her university. She soon became more than just a participant, joining the recreation department at the University of California, San Diego as a group exercise instructor. Eventually she served as a recreation supervisor at UC San Diego and “began falling in love with recreation as a job.” She secured a graduate assistantship and eventually a full-time position at Arizona State University as a program coordinator before receiving a promotion to Assistant Director. She then secured a Director position at California Baptist University (CBU). In response to the COVID-19 pandemic, Stefani was moved out of the recreation department to CBU’s College of Behavioral and Social Sciences.

As Director of Academic Operations, Stefani works closely with the Dean, associate deans, department chairs, and the program directors to support the College of Behavior and Social Sciences in connecting with students and providing them with an excellent college experience. “My work involves providing support to the college as a whole, helping to communicate with the Dean’s advisory council, engaging with community partners, and providing development opportunities,” explains Stefani. “I work to ensure a positive experience for students and support the faculty in connecting with students in a meaningful way.”

While Stefani may not work in recreation anymore, she remains proud of the recreation department at CBU. “Though I do not work directly with the recreation department, I am excited for the legacy I left and the work the team is doing to ensure healthy choices and opportunities for students to amplify their wellbeing,” says Stefani. “The programming is diverse, the facility is state of the art, and the team is trained and intentional in their work.”

Stefani has volunteered extensively for the Association during her 25+ years as a NIRSA member. She currently serves on the NIRSA Foundation Board. “I have enjoyed volunteering at different levels of leadership and presenting at state, regional, and national conferences,” says Stefani. “I have served as the National Student Representative and as the Arizona State Director. I have worked with several preconference committees, annual committees, on the Finance Committee twice, and on other groups including the Founder’s People of Color Social, Black Women in NIRSA, and Women+ Caucus.”

Stefani is clear about what she values most about the Association: “The people. As significant a business as NIRSA may be, it still feels organic and like the grassroots organization of people coming together to enact healthy change.” Throughout her NIRSA career, Stefani has been fortunate enough to count Darcy Bingham, Juliette Moore, Liz Henry, and Andrea Snead as professional mentors and sources of inspiration.

When asked about how she recreates outside of work, Stefani has plenty of fun activities to share. “We run around in the orchard, which is work and fun—where else can you snack while you work!” she says. “Helping my son with his sport activities” is also a part of her routine, as are traditional fitness workouts. She also adds, “There may be the occasional dancing in my living room, if the right song comes on.”

NIRSA: Leaders in Collegiate Recreation is so fortunate to have Stefani Plummer as a dedicated NIRSA member and leader.