One on One: Baseball Fan John Salvo Witnesses Every Possible MLB Matchup

A seasoned spectator shares his thoughts on the game's destinations. 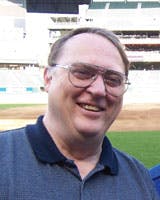 John Salvo was sitting in Houston's Enron Field in April 2001 when he overheard a fan behind him tell of his travels to see every possible matchup within both the American and National leagues. Salvo, a school administrator from Racine, Wis., wheeled around and told Jim Waddell, "You can't do that; I'm the only one doing that." The two became fast friends, even attending 68 games together out of the 422 necessary for each to complete the feat. It took Salvo 55 years and cost him "well into six figures" (he purposefully didn't keep track) - making as many as 10 stops in a single youthful East Cost road trip and later flying to and from the West Coast to check single matchups off his to-do list. Retired by the 2003 season, Salvo (who's married) typically spent 60 to 70 summer nights away from home. On the eve of his final pairing - Houston at the New York Mets on Oct. 2 - he told Paul Steinbach that he can't explain what it is about baseball that drove him to such lengths of devotion (after all, his favorite team, the White Sox, play in nearby Chicago), but he shared some thoughts on the game's destinations.

Q: What are your keys to a pleasurable experience at an MLB park?
A: I like amenities. I want better food than hot dogs. I don't like to be interrupted by fans coming and going in front of me. That's the thing that I like least about the game of baseball today. The fans are doing everything but watching the players on the field.

Q: Is it a Catch-22, with more amenities attracting more easily distracted fans?
A: Clubs are trying to entertain them in so many ways, and it really disrupts those of us who want to see every pitch and all the signs being given. You used to be able to watch a game and see every pitch. Now, I'm lucky if I see 60 percent of the pitches.

Q: Do you have a favorite ballpark amenity?
A: I like the retractable domes - Seattle, Houston, Milwaukee, Arizona and Toronto. I want to know the game's going to be played.

Q: Are there parks that leave you wanting more?
A: You know, the old parks like Fenway and Wrigley Field have a certain amount of atmosphere, but their day is over. They should be museums.

Q: Any regrets?
A: It bothers me a bit that I spent so many resources on such a frivolous thing. I almost quit around the turn of the century, because that aspect was really getting to me. Meeting Jim kind of revitalized me and, I guess, gave this a certain legitimacy, and that's when I decided to go for it the rest of the way.

Q: Are you preparing for turnstile retirement?
A: I will reduce the amount of time and money spent considerably, without a doubt. But the 2010 schedule is out, and I've already roughed out what I want to do next year - primarily interleague games. I'm going to string them together, just like the old days, so I'll see a different matchup every day. There's no way I can see them all in my lifetime, but I'll see just how many of those I can get.