As field hockey gets more 'Extreme,' are helmets in order? 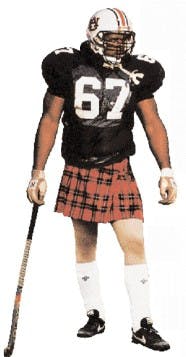 The top of Jessica Hollinshead's head has four titanium plates and a scar that runs from ear to ear, the result of a field hockey injury she suffered at a September practice when a ball bounced up and hit her in the face. What the Jenkintown (Pa.) High School player wants, before she'll return to the field, is the right to wear a hard-shell helmet, which is specifically banned by international, college and high school field hockey rules.

Hollinshead's stance has struck a nerve among a group of parents in the Philadelphia suburbs whose daughters have been injured by balls and sticks while on the field hockey field. However, at a September 29 meeting with the Jenkintown AD, Ed Benson, they were told that neither the Pennsylvania Interscholastic Athletic Association nor the Bicentennial Athletic League wanted to require girls to wear the equipment.

All of which is largely irrelevant. Despite the inflammatory story that appeared in the next week's Philadelphia Inquirer ("Severe Field Hockey Injury Points to Need for Headgear," ran the headline), no one involved with field hockey believes helmets are necessary in a sport where fewer than one player in a thousand ever requires surgery for an injury - and that, usually, is for an injury to the upper leg, ankle or knee. What's more, the rules do allow field hockey players to wear softshell, bicycle-type safety helmets if they choose. (These are typically worn, when worn at all, by players recuperating from an injury, according to Amy Rusert, director of development for the U.S. Field Hockey Association.)

And the National Federation of State High School Associations isn't exactly napping on this one, either. Federation rules already make mouthguards and shin guards mandatory, and the organization has been lobbying eye guard manufacturers for years to develop a field hockey-specific product, says Assistant Director Susan True, who has also addressed field hockey safety concerns as a member of the NCAA Committee on Competitive Safeguards.

"We've often been asked why we don't require eye protection," True says, "but the problem is there's no standard for them. There's an ASTM standard for goggles, but it's for lacrosse, not field hockey, and the sports are very different. With all the padding on the bottom of lacrosse goggles, field hockey players couldn't see the ground while wearing them."

So while field hockey administrators continue to seek a usable eye guard, they are reluctant to allow hardshell helmets for a variety of reasons, the primary one being a fear that such equipment would change the manner in which the game is played.

"We have rules that say the ball has to be kept mainly on the ground, and the stick has to stay below the shoulder," True points out. Indeed, many of the worst field hockey accidents result from rules violations. Players have suffered eye and dental injuries from sticks to the face, in spite of both the rules and, in the latter case, the use of mouthguards.

"This is not an extreme sport; I think we can get a little knee-jerk about this," says Rusert. "In my opinion, if you get hit in the head with a stick - how can I say this diplomatically? The reason people would need to wear a helmet is either their head is where it shouldn't be, or somebody's stick is where it's not supposed to be."

One of the accidents that sent True and the Federation in search of field hockey eyeguards involved a Vermont girl who, in trying to tackle an opponent, got behind the ball handler as she took a normal, below-the-shoulder swing. The end of the ball handler's stick caught the would-be tackler in the eye on the backswing. Football-style helmets, True fears, might make such dangerous play commonplace.