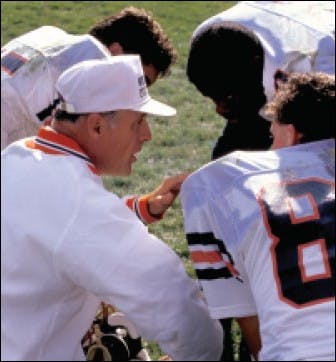 On March 9, approximately 300 high school and middle school student-athletes, coaches and athletic directors descended on the University of Maine campus to voice their concerns about the way interscholastic sports programs operate in their state. As members of a select panel charged with advocating local change listened intently, attendees of the Maine Sports Summit called for stronger communication between athletes, coaches and parents; positive learning environments; better education for coaches; fair and consistent treatment of athletes of all abilities; and - get this - more fun.

A novel idea? Not really; just a necessary one, according to J. Duke Albanese.

"We've lost our way a little bit and need a mid-course correction," says Albanese, co-director of the University of Maine's Sport and Coaching Education Initiative: Coaching Maine Youth to Success.

But the trouble isn't limited to Maine. Consider these news stories from around the country that appeared within the span of a few weeks this spring:

• Michael Salone, 33, was charged with beating players with Wiffle Ball bats and abusing them during practices when he was a wrestling coach at Souderton (Pa.) High School.

• First-year Pleasantville (N.J.) Middle School basketball coach James Guillen, 24, was suspended without pay after presenting what he called a "Crybaby Award" to a 13-year-old player at a spring sports banquet.

Clearly, the vast array of education courses for the nation's estimated one million interscholastic coaches is a hit-or-miss proposition, at best - despite mandates from state associations and local school districts.

The goal of the Maine program, overseen by UM's College of Education & Human Development and funded by a two-year, $397,400 grant from the U.S Department of Education, is to reverse an ugly trend by developing an effective model for high school sports, with an emphasis on coaching.

But why stop there? "We think our work will be of the quality and magnitude that can influence similar efforts in other states," Albanese says.

While the NCAA seems to get all of the attention for its recent academic reform efforts, national initiatives are seeking to improve high school sports, placing coaches at the forefront.

The National Federation of State High School Associations, for example, is teaming with the American Sport Education Program to launch a "Bronze medal certification" training course next year that builds on the current NFHS/ASEP teachings by including a new section targeting sport-specific skills and tactics training - including exploration of such topics as coaching student-athletes from diverse ethnic and cultural backgrounds and the role of a coach as "character educator."

"All you've got to do to be a coach is be willing," says Tim Flannery, an NFHS assistant director in charge of coaches' education. "It's no wonder we have the problems we do with coaches crossing over the line, because we have nothing that tells them where that line is."

"Silver" and "Gold" certification levels for coaches looking to go beyond the basics are also in the works, but will be implemented over a period of several years.

Meanwhile, for the first time in its 46year history, the National Association of State Boards of Education, which represents about 40 state school boards, is assessing the state of high school sports by examining (among other things) the role and responsibilities of coaches.

The Commission on High School Athletics in an Era of Reform, launched in January, aims to recommend policies for states, districts and schools that ensure athletic standards do not compromise academic standards. "Coaches were not even on our radar until we heard students talk about them," says Michael Hill, NASBE's deputy executive director, who is also overseeing the 17-member commission (including two student-athletes and NFHS Chief Operating Officer Bob Gardner). "But coaches who aren't teachers have no academic underpinning."

Initially intended to last only a year, the project has now been deemed a multiyear effort. In addition to coaching, the commission seeks to assess the state of interscholastic athletics; the role interscholastic athletics plays in a quality, well-rounded education; and the responsibility of state boards of education in overseeing those activities. It will then make policy recommendations to states, districts and schools. A report of the commission's preliminary findings will be presented at NASBE's annual conference in Orlando in October.

So is the task undertaken by Albanese, co-director Robert Cobb and members of the University of Maine's coaching initiative. The roots of the initiative lie in the Guiding Principles of Maine Learning Results, adopted by the Maine Legislature in 1996 to help instill each high school graduate in the state with, among other traits, clear and effective communication skills, a lifelong desire to learn and the ability to solve problems practically and creatively. The UM program seeks to determine how to apply those principles to high school sports and to help schools link their educational missions and interscholastic athletic programs.

"Athletics are a huge part of the school experience and community," says Albanese, a former high school teacher, coach and Maine Education Commissioner. "Coaches are among the best mentors in schools and communities, and the quality of coaches as educators and role models is key to the student experience."

One primary focus of the Maine initiative is attracting and keeping coaches who are also teachers, a nationwide problem as schools increasingly look to hire coaches from outside the school system to oversee expanding programs and teams. The NFHS estimates that half of all coaches in some states are not members of school staffs.

The Maine program's outline includes developing core principles and practices, eradicating undesirable principles and practices, investing in professional development programs for athletic directors and coaches, and convincing both to buy into ideas for improvement. "We're not looking for statutory language," Albanese says. "We want this model to be developed so well that people will want to run their programs this way."

The panel expects to make its recommendations at a statewide forum in October, with further research and development expected to be ongoing.

Coincidentally, Albanese and Hill - previously strangers - bumped into each other at an education event in Washington, D.C., earlier this year. After revealing details about their projects, the two agreed to periodically share relevant information.

"This is very ambitious," Albanese says with a laugh. "People tell us they're so glad we're going to do this - and then they say, 'Good luck.' "