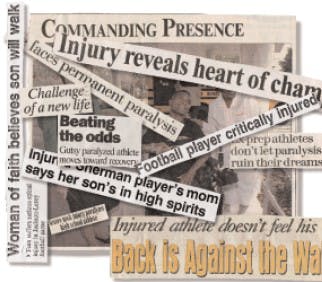 This fall, like every fall, a dozen or so American communities will witness a horrendous sight - a gridiron collision between two young athletes from which only one will recover. The next morning will come heartrending news of the severity of both the injury and the prognosis. A year or five or 10 years later, the local paper will run a story, bearing a headline like "Injury Reveals Heart of a Champion," in which one young person sends an inspirational message to other young people about human beings' remarkable ability to overcome adversity.

It's a worthy message, certainly, but an unfortunate one, so high school sports administrators have spent 20 years repeating a very strong message of their own - that blocking or tackling with the head is outside the rules. Yet, several disquieting surveys suggest that kids may not be getting the message - or at best, an inconsistent one.

Researchers at Tulane University and the Louisiana Office of Public Health recently surveyed 600 football players from 16 southeastern Louisiana high schools and found that 29 percent thought that using the top of their helmets to tackle was legal, 32 percent thought head-butting an opponent was legal and 35 percent thought it was permissable to barrel over an opponent headfirst. Of the coaches at those 16 schools, only two said they'd shown a blocking and tackling safety video distributed free by the Louisiana High School Athletic Association, three refused comment, five said they hadn't had time to show it and six believed showing the tape to their players would curb their aggressiveness.

Should coaches fail to teach proper tackling techniques, officials have the means to penalize them for it. Unfortunately, an earlier survey indicates that officials may not adhere to the letter of the 1976 rule outlawing spearing passed by the National Federation of State High School Associations and the NCAA.

The survey of 100 New Jersey football officials, by athletic trainer Jon Heck, found an extremely low level of enforcement of the spearing penalty. Forty-one percent had not made a spearing call in the previous season and 87 percent called between zero and three penalties. A typical official called one spearing penalty for each 20 games worked, although by some accounting methods as many as 40 spears occur per game between tacklers and ball carriers. Nearly half felt a player's intent was a factor in their decisions (one reason that the most likely spearing call involved late hits), even though 97 percent conceded that a head or neck injury could occur whether or not a spear was intentional.

Administrators and officials insist these surveys are flawed, and that the message is getting through.

"We just finished three statewide meetings with coaches and officials, and we didn't hear anything like that," says Boyd Sands, executive director of the New Jersey State Interscholastic Athletic Association. "I think coaches are very aware of the dangers of spearing and are teaching accordingly, and it's been a point of emphasis for our officials for years."

Adds Jerry Grunska, a retired teacher who has officiated high school and college football games for 44 years, "There was a time when coaches taught kids to block with their head - 'Aim your helmet at his numbers' - and because the National Federation rules at the time said kids who speared had to be ejected, officials seldom threw a flag because they didn't want to eject kids on a wholesale basis. But since then, the Federation's emphasis on spearing has been very successful. We work a number of scrimmages as well as games, and any time a kid goes in with his head, even if he doesn't make contact, we hear the coaches chew him out and clearly remind him of the correct way to tackle. It's rather consistent."

(But not totally. After a sophomore at a Georgia high school suffered spinal damage making a tackle last year, an AD told The Albany Herald that "He had the angle on the running back and got his head in front of him just like he's supposed to...It's just one of those freak things.")

The officials' situation is made more complicated by the question: When is a spear a spear. Grunska calls the New Jersey study's estimate of 40 unpenalized spears a game "absurd," the result of a "loose definition." He also denies that officials read intent into suspicious-looking tackles before throwing a flag - but then again, maybe they do.

"Intentional grounding of a forward pass is the only play where you read intent," Grunska says. "Although as soon as I say that, I had a game earlier this year where the QB threw a pass while being chased, and a pursuer dropped his head and hit him in the small of the back. I ejected the tackler because the hit was clearly intended to punish. Sometimes you have to distinguish between hits that are intended to punish and hits that occur in the normal course of action. So I'm being somewhat hypocritical."

"You've got to sympathize a little bit with the referees," says John Powell, director of Med Sport Systems in Iowa City, Iowa, a consulting firm that tracks high school (and other) sports injuries. "The spearing rule focuses on the top of the head as the initial point of contact, but given the dynamics of football, a player could be going in for a nice clean, head's up, textbook-page-27 tackle, but if the target at the last second changes his direction, the tackler is going to adjust his target line by changing his head position. The officials' argument is, 'If we drop the flag every time, we'll have 50 of these penalties a game.' "

Judging intent is only half the problem, for making the case for the call is tough even when dealing with coaches sensitive to the dangers of spearing. A player who spears once might have done so accidentally, and the third instance may prove intent, but try explaining to a coach the penalty flag thrown for a play that was deemed legal the first two times. "They go ballistic," Powell says - and officials demonstrating such "inconsistent" handling of the rules have a tendency to not be hired again.

So while Powell believes coaches have clearer control over spearing prevention than officials, he thinks minimizing the risk of catastrophic injuries will take their combined efforts.

"Coaches need to continually teach appropriate techniques and reprimand players who hit with the top of their head," Powell says. "But by the same token, high school sports officials are responsible for the safety of the athletes, so they should theoretically be dropping those flags."