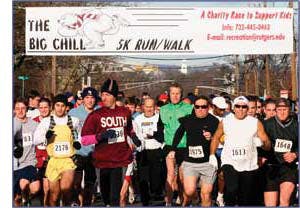 Photo of runners at the Big Chill in New Brunswick, N.J.Lincoln Park, for all its prestige as one of Chicago's trendiest and most affluent neighborhoods, has little staying power. The residents of this north-Chicago enclave -- who, according to the 2000 U.S. Census, numbered nearly 65,000 -- are about as transient as they come. Approximately 70 percent of Lincoln Park's 37,000 housing units, a fraction of which were newly constructed, welcomed new tenants in the five years leading up to the new millennium. In addition, of the nearly 60,000 adults who called Lincoln Park home in the year 2000, 67 percent were single.

It's easy to understand, then, why Maureen McGonagle never knows for sure how long her neighbors are going to stick around. Nevertheless, this is the community to which McGonagle and her staff at the Ray Meyer Fitness & Recreation Center at DePaul University -- located at the heart of Lincoln Park -- have opened their doors. "The vast majority of people we lose as members cite moving out of the area as the reason they're leaving," says McGonagle, director of DePaul University Campus Recreation. "That's good, because we know it's nothing we're doing that sends them away, but it's still frustrating."

Frustrating, indeed. Nonetheless, the pursuit of that business has proven to be worthwhile. It's true that most of the Meyer Center's users are DePaul students (the school has 23,500 students on three campuses located throughout Chicago, including 10,500 at Lincoln Park alone).

There are times, though, that the recreation department's open-door policy can be especially tough for DePaul students to tolerate -- namely, during the months immediately following the New Year's holiday, when the Meyer Center is at capacity. "Some students would love to not have community members in here. If we were to ask students if they wanted to kick out community members, 95 percent of them would probably say 'yes,' " says McGonagle, blaming limited facility space and long equipment wait times for the students' territorial disposition. (Although the 120,000-square-foot Meyer Center is just shy of celebrating its sixth birthday, university enrollment jumped 27 percent from 1998 to 2004.) "But I think when students come to realize that if it weren't for community members, we wouldn't be able to offer this or that, most agree that this is the way to go."

Most college and university recreation providers across the country would agree, too. Take, for example, the New Brunswick, N.J., campus of Rutgers College, where school officials first extended the invitation for community members -- or, generally speaking, local residents with no affiliation via student, alumni or faculty membership -- to use campus recreation facilities and programs seven years ago. It was then that school officials decided to rename Rutgers' recreational sports department the Department of Recreation and Community Development. According to Diane Bonanno, Rutgers' associate dean of recreation and community development, the shift in philosophy has paid dividends in a number of ways.

"The dean of the college and I thought that recreation could have a much greater impact on making students feel like they were part of a community," says Bonanno. "We didn't just want to do recreational sports, fitness, dance and all of those things you normally think about. We began to branch out and do activities that would be more like those offered by a community recreation department, and explicitly those kinds of activities that would bring large groups of people together for fun, memorable experiences."

Among those experiences are the Big Chill, an annual 5K run/walk held in December that benefits children who live in New Brunswick's public housing. The Big Chill's registration fee is a new, unwrapped toy suitable for children ages 3 to 14. Students as well as community members are welcome to participate in the Saturday morning event, which last year drew 1,200 participants.

"There are students who would never ever think about running or walking three miles. But for this event, they do," says Bonanno, adding that last December's 5K generated $6,100 for a local food bank and brought in more than 2,000 gifts. "They come with these presents and they walk or run with their friends, and the winning part is incidental. What is more important is that they're doing it in this enormous group."

While charity drives are undoubtedly a great service to the community, one might wonder whether offering these types of programs clouds the focus of college recreation departments and diverts attention from their number-one priority: the sports and recreation needs of the student body. Not to worry, says Bonanno. "Trust me, we never lose sight of the students. They always come first."

On the other hand, college recreation centers, because of their sheer size and collection of amenities, are often unique to their communities. Bonanno believes that in many cases -- or at least at publicly funded schools -- these facilities should be deemed public resources. "We have this philosophy called invisible programming. It starts out with the premise that if our students go away on the weekends, they're not using these buildings, so we ought to have someone else using them," she says, adding that weekend community programs such as the Big Chill or youth swimming lessons also directly benefit the Rutgers student body. "Community programming allows us to give our students extra jobs, it allows us to generate revenue, it allows us to develop a rapport with the community, which is good for the university, and it also means that we can partner with certain agencies."

Such partnerships are key if a college recreation department is to avoid direct competition with local public or private sports, fitness and recreation providers. Rhode Island College, for example, opens its recreation center, the centerpiece of which is a 35,000-square-foot field house with a five-lane, 1Â¼10-mile track, to local high school track teams.

"We had some slow times, and in Rhode Island a lot of indoor track programs at the high school level don't have big track facilities," says Donald Tencher, Rhode Island College's director of intercollegiate athletics, intramurals and recreation. "So we said, 'High schools let out at a quarter of 2, our track team basically practices at 4 or 4:30, so there's a two-hour block of available time. Let's offer our field house to high school teams for rent so they can come in out of the weather.' Everybody jumped on it."

Bonanno agrees that while it's important for college recreation officials to identify their departments' area of expertise and offer that service or amenity to the community at large, it is just as critical to let other sports, fitness and recreation providers do the same. "There is no one in the area who has a pool like we do, so other agencies couldn't possibly provide the swim lessons that we do," she says. "But if we do a golf program, we try to do it in conjunction with the local golf course or driving range. We might give in-house lessons and then we send participants out to the driving range to practice. We try to do those kinds of things so that our neighbors don't get upset."

Membership, too, can be a touchy subject -- especially among for-profit fitness center operators. "We have to be very careful with for-profits, because they might say, 'We're going to sue you because you're taking our business away,'" says McGonagle. For that reason alone, DePaul's Meyer Center only offers membership opportunities to Lincoln Park residents on a space-available basis.

Likewise, each academic year Vanderbilt University in Nashville, Tenn., permits a maximum of 200 community members to sign up for full memberships (which allow access to the student recreation center during all operating hours). Community members pay a premium: $250 per semester, versus $205 for faculty, staff or alumni who earn more than $30,000 annually, and $181 for undergraduate students.

On the other hand, Rutgers Recreation and Community Development chooses not to offer any community memberships, instead focusing on developing programs that, according to Bonanno, "give us an opportunity to show off our facilities" and generate revenue by drawing to the campus local residents, including prospective students from area high schools.

The community membership policy is much the same at Washington State University, located in the farm town of Pullman. Each summer the school's recreation department hosts two programs that are open to the public: a youth day camp and an outdoor recreation program, in collaboration with the city of Pullman Parks and Recreation Department. Because it has a climbing wall on campus, among other recreation facilities, the school has the responsibility of running the program, while the city handles registration and fees collection.

"In a little town, it pays to know your market, to know what the city parks and recreation department is doing or what's going on at other local gyms. We don't feel like we in any way are trying to compete with those businesses," says Kathleen Hatch, WSU's director of university recreation. "I think in small communities -- at least for us, and I'm sure it's true for others -- there is a sense that we need to ask, 'How can we fill in the gaps? How can we, in keeping with our broad mission, still recognize our most important audience?' Often it is student fees that are funding a significant portion of these facilities. So we need to have the students in mind first, but then we clearly can have some broader objectives."

McGonagle, too, avoids circulating direct mail, hanging outdoor banners and placing newspaper or television advertisements, all of which would constitute, as she puts it, "loud marketing." "We're not trying to compete with the health clubs in the area," she says, adding that before the Meyer Center was built, concerns were also voiced by Lincoln Park neighborhood advisory committees, who feared that aggressive marketing techniques would attract unwanted fitness enthusiasts from outside the already-crowded neighborhood. (The Meyer Center is located directly adjacent to a stop along Chicago's elevated mass-transit line.)

"Residents were afraid people would see it from the El and think that a new health club had opened," says McGonagle. "We're trying to fly under the radar. We might do a sidewalk sign every once in a while, but that's about it. It's very much a neighborhood thing."

Bonanno, too, advocates word-of-mouth marketing as the safest way to attract local residents. "There is a non-compete law in the state of New Jersey, so we try to be very careful," she says. "The only way you'd know about courses that the public can take is if you went on our web site or a student invited you." But for all its advantages and protections, word-of-mouth advertising does hold the potential to backfire.

"When you put on your program, it had better be the best possible program it can be. You can't make mistakes," Bonanno adds. "If you feel that you can only handle 100 participants, don't take 110. Because our business relies on word of mouth, if something goes wrong, that word of mouth can spread negative comments just as easily as it can spread positive ones."

In that light, Meyer Center staff members take special care to keep their facility as clean as possible. Exceptional customer service, particularly with respect to communication, is also critical to maintaining the facility's community membership base, says McGonagle. "Community members are much more vocal. Their expectations are higher than those of the students. On our user-satisfaction surveys, the highest marks come from the students, then the faculty, then the alumni, and then the community members."

"We definitely have fewer frills," McGonagle admits. "The university is closed on Christmas Day and Thanksgiving. So are we. We also close in August for one week of cleaning and maintenance. Most health clubs don't do that. Some community members have a hard time understanding that. But first and foremost, we're a student recreation center."