The inaugural issue of Athletic Business — published under the name Athletics Purchasing and Facilities in April 1977 — was a buyers guide. Every year since then, Athletic Business has continued to assemble the leading purchasing resource for the athletics, fitness and recreation industries. This year, AB went a step further to provide not only the who and where, but the what and how much. We surveyed health clubs, military installations, high schools, colleges, YMCAs and other organizations large and small (386 in total) to learn about purchasing and budget trends.

Overall, respondents' biggest expenses in 2016 were operational, with the athletics and fitness sectors reporting operational expenses consume 53 and 50 percent, respectively, of their annual budgets. For those working in recreation (including both municipal and collegiate), however, 2016 was a year of investment in facility improvement, identified by 59 percent of respondents as their greatest expenditure.

Speaking of facility investments, 72 percent of respondents have a construction project either currently in the works or planned within the next five years. Recreation programs (78 percent) are leading the building boom, followed by athletics (67 percent). Fitness construction is less robust, with only 51 percent of respondents planning to build in the next five years.

When survey participants were asked about their most successful investments, turf fields saw notable mentions among recreation and athletic respondents, with software and technology not far behind. Also popular among athletics professionals: scoreboards.

Major purchases are not taken lightly and are affected by many factors. Respondents reported that the state of the economy is an important factor in decision-making, followed by equipment innovations and programming trends. 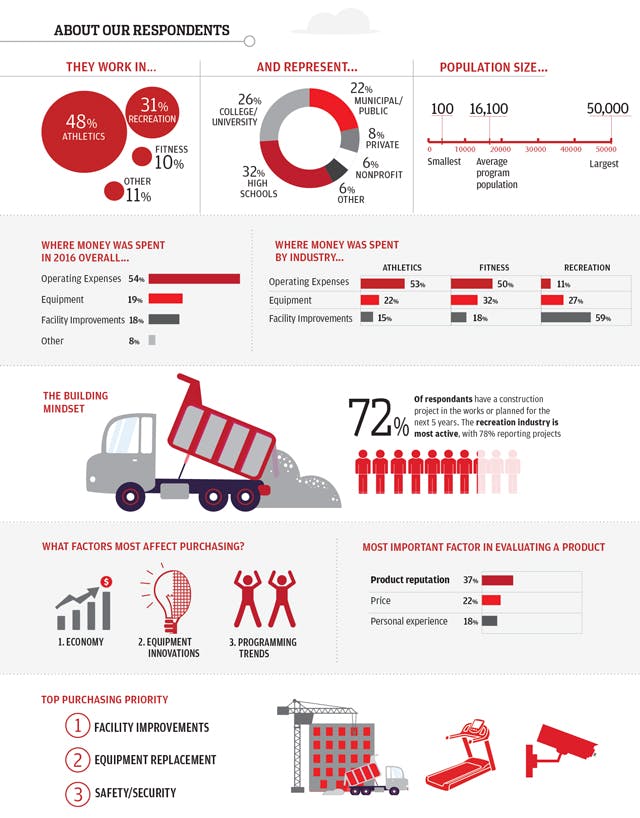 These differences are likely tied to the different funding models supporting respondents, with athletics professionals reporting taxes or grants as their primary funding source, with donations a close second. The fitness industry is driven by membership/user fees, while the recreation industry reported a combination of taxes and grants and membership/user fees.

Athletic Business would like to thank all of the readers who took the time to tell us about their programs; we hope to use this information as a benchmark in future years to provide insight into trends and opportunities within and across the industries we serve.

This article originally appeared in the March 2017 issue of Athletic Business with the title "Building and Budgets: The results of AB's 2017 purchasing survey." Athletic Business is a free magazine for professionals in the athletic, fitness and recreation industry. Click here to subscribe.