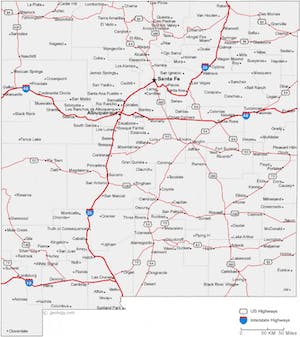 The burden of travel for high school sports teams has brought unintended consequences this year due to the increased costs involved in traveling — primarily rising gas prices — in addition to recently mandated pandemic-related restrictions on unvaccinated players and coaches occupying hotel rooms.

As reported by the Farmington Daily Times, some New Mexico districts simply can't afford the expense of an overnight stay at hotels, particularly when additional accommodations have to be made for those who cannot stay in rooms with one another.

Santa Teresa High School's football team, which made the long trip to Farmington High last week for their Class 5A quarterfinal match, drove up the morning of their game last Friday, and left for home shortly after their 28-6 loss to the Scorpions. The bus in which the team arrived didn't park at Hutchison Stadium until approximately two hours before the start of the game. The team traveled over 900 miles by bus and played a football game in the span of more than 24 hours.

"If that had been our district making those kinds of requirements or demands, I'd have been out of there that same day," Farmington head coach Jeff Dalton told the Daily Times. "Not being able to afford hotel rooms is not a good enough reason. You find a booster or someone and get it paid for."

Athletic budgets in some cases have been stretched thin of late due to restrictions regarding accommodations for students and staffs on these road trips.

The New Mexico Activities Association's recently updated handbook on Guidelines for Participation state that unvaccinated individuals shall not share sleeping quarters. These guidelines were updated in accordance with the state's Department of Health and the Public Education Department.

Aztec High School's football team, which traveled nearly 720 miles to and from Ruidoso for a first round playoff game earlier this month, reserved more than 40 rooms for the overnight stay. Athletic director Bryan Sanders estimated the trip cost more than $8,000, the Daily Times reported.

The current rules regarding deciding home and away teams in the semifinal and championship games for the state football championship are fairly simple, according to Steven Bortstein of the Daily Times.

This weekend, top-seeded Farmington makes the 426-mile trip from Hutchison Stadium to the Bulldog Bowl in Artesia for one of two Class 5A semifinal games, both of which will be played on Saturday.

"These rules have been in place for a little while now, and as a coach you know what the rules are going in and make plans accordingly," said Dalton. "In the span of every four or five years, the same teams are in this position in the semifinals and finals. If it went by higher seed, it would seem fair also, but we know the rules and how it works, I think coaches that are consistently in this position are fine with it."

With more than 160 NMAA-member schools in the state, the needs of one district as opposed to another and the financial means to achieve those needs are likely going to be different. One school's football team might want the opportunity to play in front of a large crowd in a big stadium where another might benefit more by hosting a playoff game on their own field. But with championships decided at neutral sites in more than a half-dozen sports, primarily in and around Albuquerque, why can't the same be done for football?

"Any decision made in regards to the state playoffs, it is made with the support of our membership," said NMAA executive director Dusty Young. "At this point in time, our schools have not wanted to centralize our state football championships."

"It's a tough call but there's no reason we can't play these types of games in a neutral site," said Ruidoso head coach Kief Johnson, who must take the wheel of the team bus due to a driver shortage . "We played St. Pius last week at Nusenda Stadium in Albuquerque and the kids got a real thrill playing in a big time facility like that."

In a state the size of New Mexico, there are logistical problems with the scenario of one central site for a championship game.

"It wouldn't make sense for two teams located close to each other in one part of the state to make the trip to Albuquerque," author and New Mexico football historian Dan Ford told the Daily Times. "If you lived in Roswell and they're playing against Goddard for the championship, why should the teams and their fans have to travel to Albuquerque for that game?"

"I can see the benefits of playing in one neutral site," Dalton said. "But I can also see more benefits in a town and a community really welcoming the importance of a big event like a state championship game."