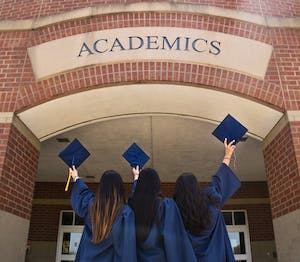 Less than one-quarter of the nation's wealthiest college athletic departments say they have a plan in place to maximize the amount of money they can give to athletes this year by providing cash rewards for academic success.

According to information gathered by ESPN in the past several months from public records requests and a voluntary survey, only 22 of the 130 FBS-level schools say they have plans in place to provide these academic bonus payments to their athletes this year, Dan Murphy reported.

In response to a federal judge's mandate, the NCAA changed its rules in August 2020 to allow schools to pay each of their athletes up to $5,980 per year as a reward for academic performance. The oddly specific dollar amount was calculated during the legal proceedings because it is equal to the maximum amount of financial value an athlete can receive in one year from awards related to their athletic performance, such as being named conference player of the year or winning the Heisman Trophy. The U.S. Supreme Court solidified the federal judge's ruling with a 9-0 decision last June in NCAA v. Alston.

Twenty months after the initial rule change, and nine months after any doubt about its legal permanence was removed, more than one-third of FBS respondents say they have not yet decided whether they will provide these additional benefits to athletes.

Schools are not required to provide any new benefits or cash bonuses, but have the option to do so. Of the 130 schools contacted, 101 provided a response. Among ESPN's findings:

• Twenty-two schools said they have plans in place to reward their athletes with payments for good grades this semester.

• Thirty-four said they have not yet decided if or when they will start to pay academic bonuses.

• Twenty said they will not make bonus payments this year, but plan to make them in the future.

• Fifteen said they have no plans to pay academic bonuses.

• Ten responded to public records requests by saying they have no relevant documents of a plan to share, or by providing documents that disclosed no information about an existing plan to make academic bonus payments.

According to Murphy, the results provide another example of the financial disparity among schools within the bowl subdivision. Nine of the 22 schools with plans to pay bonuses this year compete in the nation's richest conference, the SEC. Georgia, the reigning national champion in football, is the only SEC school that said it was still undecided on bonus payments.

All but one of the schools paying academic bonuses this year come from a Power 5 conference. The University of Connecticut, a member of the Big East, said it will pay bonuses to its men's and women's basketball players who earn them this year and hopes to include other sports in the future. A half-dozen other schools from non-Power 5 conferences say they plan to pay bonuses to their athletes in the future.

"The competitive market will emerge and we fully expect everyone will have these in the near future. If not for COVID, I think it would have happened more quickly," attorney Jeffrey Kessler, who represented the plaintiffs in last summer's Supreme Court case, told ESPN. "With the combination of the educational aid and NIL, it's hard to not see that the welfare of athletes today is significantly advanced to where it was prior to the Alston decision."