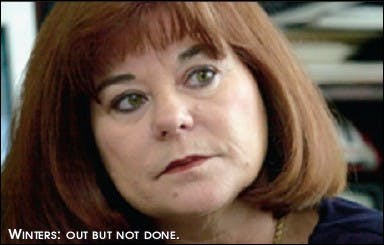 When the University of South Florida agreed on Aug. 30 to pay $300,000 to settle a handful of racial discrimination claims, the school was clearly hoping for a tidy resolution to a public relations nightmare that had plagued it for more than two years. The timing of the settlement, as some critics of the university have noted, appeared to be calculated to ensure the least amount of press possible - the Friday before the long Labor Day weekend. Additionally, it was a time when newspaper sections were full of 9/11 stories and sports reporters were focused on the opening of football season.

But the resolution promises to be anything but tidy. Several of the individual defendants may well become plaintiffs in the months ahead, and the university may ultimately find that the settlement agreement raises as many questions as it does answers.

USF's barrage of unwanted publicity began in April 2000, but the problem - if there was one, USF says - actually came to light a year earlier, when assistant athletic director Hiram Green reported to AD Paul Griffin that there was an "undertone of racism" in the women's basketball program. Griffin apparently didn't think so, because women's basketball coach Jerry Ann Winters (pictured) was given a two-year contract extension in October 1999 and then was given measured support when she kicked Dione Smith (who is black) off the team the following April. Smith, who had previously complained of racism in the basketball program, filed a discrimination complaint with USF's Equal Opportunity Affairs office later that month, and then a federal racial discrimination lawsuit against Griffin, Winters and the university in August 2000. Lawsuits by seven other former players followed over the next several months, alleging that black players were segregated during road trips, treated more harshly than whites and subjected to racial slurs from coaches.

At this point (as more players filed suits), the case became almost hopelessly tangled. In late October 2000, the Equal Opportunity Affairs office found "reasonable cause to believe" that Winters cut Smith in retaliation for her previous complaints, and Griffin suspended Winters with pay. After Winters' appeal was disallowed by USF Vice President Laurey Stryker, she was fired by Griffin. It was among Griffin's last acts as athletic director. First, an independent investigator faulted the athletic department's internal investigation. Then, Green charged that Griffin and other school officials had suppressed his initial findings of racial discrimination. Griffin was forced to resign as athletic director eight days later.

Spring 2001 turned to summer. An administrative judge ruled that USF failed to prove its case against Winters, and recommended reinstatement - something that USF then went to court to prevent. An attorney for the plaintiffs, meanwhile, complaining that the university was not taking the case seriously, ratcheted up the collective damages award sought from $395,000 to $10 million. Another former player promptly sued, followed by two more former players and an assistant coach last January.

All the parties have been barred from discussing the settlement, but there is plenty being said around south Florida to suggest that all is not well. The 11 former players and one assistant coach who sued, plus Green and Winters' former secretary, will share the award - sort of. (The attorneys will get the biggest share.) Smith will get $39,678, and the other 13 plaintiffs will receive $19,948 each. After out-of-pocket legal expenses are deducted, Smith will net $6,000, which may not cover her tax liability on the overall award. The other plaintiffs will get about $3,000 each. Some of them will also get limited free tuition, and the university will be required to clarify its website information about discrimination claims and to provide proof it has put in place a consultant's recommendations.

What the plaintiffs won't get is an acknowledgement of any wrongdoing. USF President Judy Genshaft and several trustees repeatedly characterized the settlement to reporters as a strictly financial decision, noting that the lawsuit dismissal papers described the settlement as "amicable" for all parties. Well, maybe not all of them. Griffin, now senior associate athletic director at Georgia Institute of Technology, claims that USF's general counsel and human resources department has "interfered" with his efforts to land a full AD position with a Division I school, and is threatening a lawsuit.

Winters, who is working as a real estate agent with a Tampa Century 21 franchise, continues to fight the school to get her coaching job back. As she told The Tampa Tribune after USF settled Smith's suit on her behalf and without her approval, "For crying out loud, it's like getting someone to the altar and then your fiancé disappears on you. You have the case all the way to the end; the trial had been set. It would have been won or lost on its merits. Why not let a judge decide? They didn't want me to have my day."