A school board backs down after parents lodge a Title IX complaint. 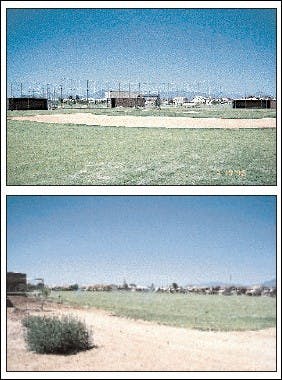 It had to feel good to be the parent of a Desert Vista High School student. The Tempe, Ariz., school district had successfully gotten taxpayer support for a $120 million bond issue for the construction of a new school and improvements to existing schools, and as spring turned to summer in 1996 the new 50-acre, $48 million high school was nearing completion. From the street that Jim Hustad traveled daily to and from his civil law practice, he could see the last touches being put on the complex, including what would become two ball diamonds by the time the spring 1997 season started.

Hustad was particularly excited about those fields, which the school district was spending $480,000 to build, because of his two daughters' involvement with their schools' softball programs. His eldest would be a sophomore there come fall; his youngest, an eighth-grader, was just a year away from playing for Desert Vista.

"I just assumed they were building one field for the boys' baseball team and one for the girls' softball team," Hustad says. In fact, the school board was in the midst of negotiations with an adjacent Mormon church that was planning to build two softball fields on its property. The board intended to lease the church's fields for the girls' softball team's use, as a way to help both entities defray the costs of ball field construction. As school board member Mary Frances Lewis says, "Our community desired to find more areas of cooperation, including the sharing of facilities when possible. We saw it as a win-win for everybody."

Everybody, Hustad believed, but the members of the girls' softball team. For the district to spend half a million dollars on behalf of the boys' varsity and junior varsity baseball teams and scrimp on facilities for the girls, sent a clear message to the girls that their teams were second-class. What was worse, he says, was that the lease being negotiated would forbid the girls from using the fields after 6 p.m. or on weekends, not to mention during the summer, when church youth leagues would be in play. In Arizona, a hotbed of women's softball, this would leave the Desert Vista girls at a considerable disadvantage.

"Title IX is clear - they have to provide equivalent facilities for boys and girls," says Hustad. "The boys have the most beautiful high school baseball fields I've ever seen, better than most junior college fields. And they wanted to put us on some church fields that didn't have rest rooms, water or scoreboards, with a lease that was so restrictive, it was worthless to us."

Hustad went to the school board with his concerns but says he was told that, in any event, the girls' fields would not fit on school property. The plans for the church fields given to him by the board bore this out; when Hustad superimposed them on the plans for the school, there clearly was no room for them next to the baseball diamonds. To Hustad, however, something about the church fields looked wrong. "I looked up the dimensions for girls' softball fields, and when I did them to scale, I found that the fields they were putting on the church property were actually men's softball fields, and therefore were substantially bigger than girls' fields," he says with some amazement. "When we scaled them down to girls' dimensions, they fit perfectly on school property."

Hustad wrote the board before their July vote on whether to approve the $65,000, five-year church contract. In it, he says, he "gave all the reasons why it was unacceptable to us and said that if they didn't put equivalent fields on school property, I would file a Title IX complaint." Brushing this off, the board voted 4-1 to approve the contract - and Hustad, as promised, went to the feds.

In the aftermath, board member Steve Rich told USA Today, "What we have here is a group of parents trying to force the school district to provide facilities we're not required to provide." Lewis characterizes the situation more charitably as "a misunderstanding," but differs with Hustad on a number of issues. The parents of the softball players acted out of "nervousness," she says, that the school board had "forgotten" them. What was more, their insistence on access during the summer months convinced the board that while "we were making an agreement based on the needs of the program, they were concerned not about the school use but their personal use."

Lewis says, "I felt that we were on-target. All along, the facilities that were being planned in conjunction with the church were equivalent, if not better, than other softball facilities within our district."

This was not an argument that was likely to sway the Denver, Colo., Office for Civil Rights, to which Hustad sent field plans and photos. The crux of Title IX is that public monies spent on public education must be divided equitably between males and females, meaning that the standard for the Desert Vista girls' softball diamonds is not other girls' softball diamonds in the district, but the brand-new, state-of-the-art baseball diamonds serving the Desert Vista boys.

That's not how Lewis sees it.

"The interpretation of Title IX has different levels," she says. "Where some people might perceive that they don't have the same things that other programs have, other people would say that this program has what it needs to stand on its own two feet and serves the individuals involved, whether they be boys or girls. I've never felt that I had to be defensive about whether or not we were serving all our students. In my opinion, ours is much, much better than a lot of districts."

According to Lewis, the board never considered a 50-50 division of the available funds.

"I don't think the board ever was laying money on the table and intending to spend this dollar amount for this and this dollar amount for that. We were looking at the programs and trying to meet the needs of those programs the best that we could," Lewis says, adding, "I don't think you could ever have enough money to provide all the things that would be nice to have."

Resolution of the dispute came rather quickly, as it turned out. After the OCR advised the board that its plan violated Title IX, the board voted 3-2 to spend $250,000 on two girls' fields on school property. Hustad says the girls' fields are "not quite as nice as the boys' fields, but they'll probably be the nicest girls' softball fields at any Arizona high school." Begun in the late fall, the fields were ready for the girls to practice on in early February.

[In late January, the school board nearly prompted another suit when it voted 3-2 not to renew the contract of Larry Bandura, the girls' softball coach, right on the heels of last years' district freshman championship. Hustad rallied the troops once again, calling the vote "a clear case of retaliation," a charge that the board itself doesn't deny, exactly.

"One of the board members felt the coach was involved in the Title IX lawsuit and that that amounted to insubordination," Lewis says. "I don't know that I can say that it was retaliatory, it was just an action based on a personal interpretation of how he saw things." After a closed session one week later, the board reversed, 4-1, to retain Bandura.]

While Lewis views the entire incident as a lost opportunity ("I would have preferred to have had the shared facility and saved the money as we initially had planned," she says), Hustad feels vindicated and wants parents everywhere to know that they have more power to help their daughters achieve equity than they know.

"Title IX is way underutilized," he says. "I think a lot of people don't realize that the U.S. Department of Education will help you, and it doesn't cost you anything. Their whole purpose right from the start was to try to resolve everything as quickly as possible and be fair to everybody. They didn't strongarm anybody."