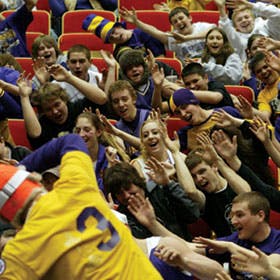 The jeering began in early March, when an overzealous headline writer for The Daily News of Longview, Wash., incorrectly claimed that Washington Interscholastic Activities Association officials wanted to "ban booing" as a way of promoting positive sportsmanship. Newspaper columnists around the state, and then around the country, latched onto the phrase and weighed in with scathing commentary. "You can't even boo refs?" questioned Orlando Sentinel scribe David Whitley. "Ladies and gentlemen, we officially have reached Never Never Land." Joe Queenan, writing for The New York Times, called it "one of the most depressing pieces of news to come along in years," and Detroit Free Press sportswriter Mick McCabe even questioned the sanity of the WIAA's executive director, Mike Colbrese.

Turns out Colbrese isn't insane at all. In fact, there never was, is or will be a boo ban - although the association has taken great strides toward creating better fan environments, which could have led local media to conclude that administrators were banning booing. "I may be assertive, but I wouldn't be crazy enough to do something that doesn't make any sense," Colbrese says. "As administrators, though, we can no longer just say our students have to use positive cheers, because somebody will come along and ask, 'Well, isn't cheering against the other team positive for our team?' "

The fiasco forced Colbrese to run damage control on the national talk-show circuit, explaining sportsmanship to everyone from Bill O'Reilly to Dan Patrick, as well as seizing the opportunity to issue a rallying cry for students, parents and school administrators everywhere to insist on stronger sportsmanship in the stands. "We needed to take an issue like this and put a spin on it right away that made sense to people, and I think we did," Colbrese says. "A ballgame is just an extension of the classroom, and therefore has an educational purpose. There are lessons that must be taught - and can only be taught - in a game setting. If we don't emphasize positive sportsmanship, then we've missed the boat, because that's the value of school programs."

Even at the high school level, though, cheering and booing are "fundamental rights" of all sports spectators, according to Tim Delaney, a professor of sociology at the State University of New York at Oswego. "However, it is important to note that booing is different than abusing," he says. "Fans should be allowed to boo a poor call or a poor decision, but they do not have the right to shout obscenities, threaten or abuse anyone - including fellow spectators, players, coaches and referees. Attempting to ban booing is a farfetched idea. On the other hand, expecting good sportsmanship should be a fundamental principle of the sporting environment."

Todd Clark, director of communications and the sportsmanship specialist for the Wisconsin Interscholastic Athletic Association, agrees. Like its Washington counterpart, the Wisconsin association also fell prey to a newspaper story in March, this one appearing on the front page of Madison's Wisconsin State Journal on the opening day of the boys' state basketball tournament, declaring that the association's sportsmanship standards "take the fun out of tourney cheering sections."

"I've said it before, I'll say it now, and I'll say it a million times: If you're going to allow kids to do whatever they want in the stands - including taunting and using vulgarities - you're accepting that type of behavior," Clark says. "Schools have to do something about this. When administrators see something that's inappropriate, they have to be the bad guy. Nobody likes to go into the stands and say, 'Sorry, son, but what you just said was unacceptable, and you're leaving.' But we would rather have an administrator, a parent or a security person confront a student than not, because it sets a good example and says that kind of behavior is not going to be tolerated at our events."

A disparity in fan-behavior policies among Washington's 40 interscholastic leagues - some allow face-painting, for example, while others don't even permit handheld signs - prompted the formation last fall of the WIAA's Sportsmanship Committee, charged with developing uniform policies regarding how students can act in the stands. (Guidelines were expected to be finalized in May.) "Some of our administrators don't want to take control," Colbrese says. "They don't think it's their job."

More athletic administrators need to follow the lead of both WIAAs, says Carleton Kendrick, a licensed psychotherapist and author of Take Out Your Nose Ring, Honey, We're Going to Grandma's: Hanging In, Holding On and Letting Go of Your Teen. "I would support school policies and regulations that would first warn and then demand the expulsion of fans who violate community-based standards of decency," he says. "Accompanying this policy would be public forums, local cable programs, and the distribution of printed literature designed to educate school sports fans concerning the conduct and sportsmanship expected and demanded of those attending school sporting events."

To that end, Kentridge High School fans attending the Washington boys' 4A state basketball finals at the Tacoma Dome in March were handed a one-page flyer, created by a school administrator, thanking them for attending the game and reminding them to show "Charger Pride" by rooting for Kentridge - not disrespecting the referees or the Chargers' opponent, Ferris High. "It worked," Colbrese says, adding that he plans to promote such positive behavior as a model for other schools. "In a sense, it's like a lesson plan: 'Here's what you can do, kids, here's what we're going to focus on. Let's figure out how to be creative within this context.' "

Students at Baraboo (Wis.) High School learned a lesson in January, when administrators put a stop to the seemingly patriotic cheer of "U.S.A.! U.S.A!" at games after discovering its usage as a phonetic acronym for a vulgar insult that begins with the words "you suck."

Others are learning, too. After a whirlwind media tour and weeks of receiving vicious e-mails accusing the Washington Interscholastic Activities Association of fostering "a bunch of namby-pambies," Colbrese says his original message is finally sinking in. "As time has gone on, people are starting to realize that this was never about booing," he says. "This is about positive cheering. They now say they understand our point and they wonder why more people aren't doing something about this."