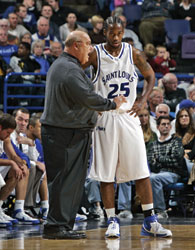 Mike O'Connell admits he's not a "sports guy." That's why the TV reporter for NBC affiliate KMOV had to ask for confirmation that the man standing there among the scores of fellow St. Louis residents who had entered McCluer High School's gymnasium Jan. 19 to hear presidential hopeful Hillary Rodham Clinton speak was, in fact, Saint Louis University men's basketball coach Rick Majerus.

"My thinking was, 'I wonder why this guy is here,' " recalls O'Connell. So he asked. In the course of a three-minute videotaped interview, Majerus shared that he is "very much an advocate of stem-cell research" and "pro-choice, personally." When Majerus - who previously attended and coached at Marquette University, which like SLU is a Jesuit institution - confirmed to O'Connell that he is a Catholic, the reporter seized the opening: "Is this okay with [SLU president] Father [Lawrence] Biondi?"

"What, are you trying to go '60 Minutes' on me?" asked a visually bemused Majerus, who went on to assure O'Connell, "I'm proud to be Jesuit educated. I'm proud to be the Saint Louis coach."

KMOV aired the interview as its own news story two nights removed from the Clinton rally. The following day, St. Louis Archbishop Raymond Burke weighed in. "I'm concerned that a leader at a Catholic university made these comments. It can lead Catholics astray," Burke said, calling on the university to take "appropriate action" regarding Majerus. "I just believe that it's of the essence for people to understand as a Catholic you just cannot hold these beliefs."

By week's end, the controversy had become national news. "I have no bone to pick with the bishop," Majerus told espn.com's Pat Forde. "He's entitled to his opinion, but I should be entitled to mine."

Debate centered upon what rights a university employee - particularly one with as high a profile as Majerus, who brought a 422-147 career coaching record to Saint Louis this season - actually has to publicly air his or her political views. An online poll at stltoday.com asked, "Who do you back in the Majerus-Burke dispute?" and 77 percent of the more than 7,000 participants took the coach's side, stated as, "Even basketball coaches have the right of free speech."

Certified speaking professional Kathleen Hessert, president of the Charlotte, N.C.-based consultancy Sports Media Challenge, agrees. But, she adds, just because coaches can voice their personal political views doesn't necessarily mean they should. Not only is the university's image at stake, so are the recruiting, attendance-building and fundraising goals of the coach. "I talk with my clients about reputation management," says Hessert. "They can say anything they please, but they have to be accountable for the fallout from it."

Majerus was, as of this writing, still fulfilling his first season of employment as the SLU coach, without any apparent job-related repercussions. The university, which declined AB's interview requests, released the following statement: "Coach Rick Majerus' comments were his own personal views, and he was not speaking for Saint Louis University. The comments were made at a non-university event, and he was not there as a university representative."

Majerus, who was not wearing SLU apparel at the time, is nonetheless identified during the KMOV interview as "SLU head basketball coach."

"Even though he wasn't there representing the university, there's no separating him and the university, because of his role," Hessert says. "It's a shame he allowed himself to be drawn into that situation, and put his institution and his team in a controversial situation that didn't need to happen."

Twice during the interview, Majerus stated, "I'm not going to go there." Then, without missing a beat, he did. When asked how Majerus should have answered O'Connell's questions, Hessert says, "If he was going to position himself within a political arena like that, then he should have said, 'I'm keeping those opinions to myself. Those are personal, and I choose not to make them public.' " Hessert then offers Majerus this much wiggle room: "He could add, 'However, I am here, so my interests are with these candidates.' "

One of the factors that drew Majerus out of retirement and to the SLU sideline - construction of an $81 million on-campus basketball arena, which opens next month - caused its own political dustup, the result of which was cited by the St. Louis Post-Dispatch in the coach's free-speech defense. Arena opponents sued the university in 2004 on the grounds that the city of St. Louis violated state and federal constitutions when it granted the school $8 million in tax increment financing for the facility. The Missouri Constitution prohibits public funding for any "college, university or other institution of learning controlled by any religious creed, church or sectarian denomination whatever." However, in a 6-1 decision, the Missouri Supreme Court ruled last year that the school is not controlled by the Catholic Church or by its beliefs.

Moreover, Archbishop Burke doesn't hold any direct control over the university's administration, but does claim, according to KMOV's O'Connell, "a sort of wildcard, this power over the Catholic identity for all Catholic institutions within his archdiocese. And he can assert that."

The power struggle over political statements can be only slightly less vague at public institutions. In February 1992, then-University of Colorado football coach Bill McCartney said at a news conference that homosexuals are "a group of people who don't reproduce yet want to be compared to people who do." He did so while wearing a Colorado sweater and standing at a podium bearing university marks. He also had lent his name to various fundamentalist Christian causes, with one organization identifying the coach in a piece of literature by his university position.

McCartney was rebuked for his remarks, according to Judith Albino, CU's president at the time, though she can't say exactly how the coach was disciplined. "University regulations stated clearly that individual members of the faculty and staff should not represent themselves as speaking for the university when expressing personal views, particularly on political matters," Albino says. "Coach McCartney did at one point call a press conference, and he was at a CU podium in front of a CU banner wearing a CU sweater when he made statements that the university did not agree with. And so he was out of compliance with policy."

Calls flooded Albino's office, forcing the phone system to shut down. She received more letters on this issue than on any other during her four-year tenure. Reaction ranged from pleas for tolerance of homosexuality to death threats against the president. "Some saw me as opposing the coach whom they revered and with whose positions they agreed," Albino says. "There clearly was an organized effort to address this on the side of supporting the coach."

McCartney and then-athletic director Bill Marolt did not respond to AB's interview requests. Albino talked to both at the time, saying of her dealings with McCartney, "He understood the problem, and he apologized for it."

In the immediate aftermath of his own situation, Majerus made no apologies for airing his views. "These beliefs are ingrained in me," the coach told the Post-Dispatch. "And my First Amendment right to free speech supersedes anything that the archbishop would order me to do. My dad fought on Okinawa in World War II. My uncle died in World War II. I had classmates die in Vietnam. And it was to preserve our way of life, so people like me could have an opinion."

Hessert says she wouldn't be at all surprised to see more coaches make public their personal politics. "Look at how many people are taking public positions about politics now," she says. "The line between sports and entertainment has blurred so much, and coaches have gained such credence with the populace. They are superstars."

Albino believes that campus administrators everywhere need to appreciate the impact that such circumstances can create. "We probably don't pay enough attention to it, and I think we need to have discussions within athletic departments about it," she says. "A high-visibility coach commands a lot of attention, and whether or not it's the intention, the impression may exist that he or she is speaking for the university. Therein lies the problem. Administrators have to sort out how they're going to manage that. It's not impossible, but I understand how difficult that can be."