A solid set of booster-club guidelines can guard against embezzlement. 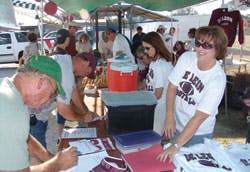 When Goodrich (Mich.) High School Athletic Booster Club treasurer Tonya Yannaki suddenly stopped attending meetings last year, her fellow boosters demanded she turn over the club's financial statements. That's when they discovered that Yannaki had transferred $48,000 from club bank accounts into her personal account over a 12-month period. The money helped pay bills and buy a house, according to investigators. Yannaki has since made restitution but still faces up to 10 years in prison.

The Yannaki case followed a similar incident in nearby Livonia, where the former president of the Bentley High School Boosters Club was charged with stealing $17,000. "That's the problem with these clubs - there's no checks and balances," Genesee County Prosecutor David S. Leyton told The Flint Journal. "It's too easy."

Steve Beden, executive director of the North American Booster Club Association, agrees that the very nature of prep-level fundraising leaves assets susceptible. Many booster organizations embrace anyone who volunteers their services and may often overlook the fact that the treasurer has little or no professional background in finance. "Somebody is tagged, pushed into the role of treasurer and given the checkbook," Beden says. "There's no accounting, and there are no oversight committees. Clubs that operate like that can end up getting in trouble."

Booster club embezzlement is a crime of opportunity predicated on trust, says Cynthia McMannon, an assistant executive director of the Arizona Interscholastic Association who specializes in finance and human resources. "While fraud cannot succeed without trust, conducting a successful booster club is also based upon trust," she says. "Booster club members must have a certain degree of autonomy and authority. The question is, how much?"

Beden has spoken with many an athletic director who claims to have experienced strained relations with one or more booster clubs. That friction is often the result of power struggles, when boosters believe they should have control over such administrative duties as the hiring and firing of coaches. As a result, some athletic directors tend to "push the clubs into left field," he says. "They really don't know what else to do with them."

Those clubs then operate with little oversight or support, and members may be more willing to risk breaking the law. It is far easier for someone to rationalize dishonest behavior in that type of atmosphere, McMannon says.

"If somebody wants to steal something, it's going to get stolen," adds Mike Kimmons, assistant principal and athletic administrator at Adamsville (Tenn.) Junior/Senior High School, who is doing his best to make that as difficult as possible. Years ago, the school suffered booster club fraud that resulted in the elimination of all such organizations. Now that the organizations have been reinstated, Kimmons instructs members of the five athletics-related booster clubs to deposit all funds directly into individual team accounts that are monitored by the school's full-time bookkeeper. "I'm not responsible for the booster clubs, but any money they raise is going to go through me or another administrator," he says, stressing that the policy makes theft a lot less tempting.

Adamsville appears to have gotten a jump-start on Tennessee's School Support Organization Financial Accountability Act, which will take effect July 1. Under the new law - passed last June in an effort to eliminate illegal fundraising, fraudulent accounting and misappropriation of booster club funds - every school principal in the state will have ultimate control over all booster clubs and can dissolve them at any time. Additionally, each booster organization must provide officers' names with complete contact details and election dates, as well as draft bylaws and submit annual goals.

Of the estimated 1.3 million booster clubs supporting schools, colleges, universities, municipalities and private organizations, NABCA says that few actually take the time to develop bylaws or objectives. That's why the association provides a sample "code of ethics" to help clubs create their own - including a statement that all members will "hold ourselves accountable to the highest standards for honesty, truthfulness and public service." With language like that, Beden says, club members tempted to pocket funds or manipulate accounts might think twice.

In the wake of the Bentley High embezzlement, a booster organization at a neighboring school decided to require that copies of bank statements be provided to and reviewed by members at meetings, and that one club member not authorized to sign the group's checks audit the checking account on a quarterly basis.

Those are among the defenses that Beden and McMannon suggest, in addition to the following:

Booster club officers may be the most common suspects in embezzlement cases, but they aren't always to blame. Last November, a former athletic department secretary at El Toro High School in Lake Forest, Calif., pleaded guilty to stealing an estimated $204,000 from athletic booster clubs over nine years, and was sentenced to a year of house arrest and ordered to pay back the money. And in December, a former employee of Bishop Lynch High School in Dallas who handled cash proceeds from ticket sales at games and other events was indicted on felony theft charges in connection with more than $95,000 missing from the school's booster club coffers. School officials say she wrote checks to herself and forged the athletic director's signature.

"It's sad any time something like that happens, because when the situation hits the papers - and in most cases, it does - you're going to lose support for that organization. And not just that year, but also in the coming years," Beden says. "So even when the people who caused the problems are long gone, the kids will be the ones paying the price."

The Goodrich booster club was lucky. It recouped the stolen money, which doesn't always happen. Goodrich boosters also noticed more Friday night bingo players than usual after charges were filed against Yannaki - an indication that the organization still has the community's support.

The reason residents might be up in arms about booster-club embezzlement is also what may drive them to lend additional support in times of need. "Residents take ownership in a team, and they feel like the money belongs to them," Kimmons says.

Beden claims the majority of booster clubs are slowly becoming more organized and disciplined. That said, the actions of any individual member could still send a club reeling. "These are parents who are good people," he says. "They do not take on their roles with the goal of going out and doing something wrong. But they can get in over their heads."