Policy-Makers Prepare as Some Young Athletes Wrestle with Gender Issues

As some young athletes wrestle with gender identity, athletics policymakers are preparing for a sexual evolution. 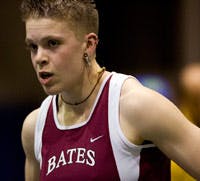 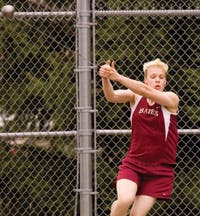 Having decided to change gender identity, Keelin Godsey successfully defended his NCAA Division III women's hammer throw title in 2006.
Keelin Godsey's dream of joining the United States track and field contingent in Beijing this month fell exactly 10 feet short July 7 in Eugene, Ore. Needing to finish among the top three in the women's hammer throw at the U.S. Olympic Trials, Godsey, a two-time NCAA champion at Division III Bates College, placed seventh with a distance of 65.57 meters. Now, perhaps, he can get on with the rest of his life.

Born Kelly Godsey (and listed as such in official trials results by USA Track and Field, which relies on athletes' birth certificate information), Keelin changed his name and began referring to himself as male in the summer of 2005, before his senior year at Bates, though he had not undergone any surgical or hormonal treatment to complete the transformation from psychological transgender individual to full-fledged physiological transsexual. This allowed him by rule to continue to compete at the collegiate level against women - even as separate dressing accommodations were made for him, home and away, during the season.

This is the potentially awkward, androgynous world of transgender/transsexual athletes. It's a small world, by all indications, and Godsey's transformation, in name and pronoun only, is particularly difficult to put into context. NCAA participation numbers don't account for transgender student-athletes, but the association has nonetheless addressed the issue - beginning in October 2006, with the formation of a transgender policy discussion group, and as recently as this past January, when a panel on lesbian, gay, bisexual and transgender student-athletes gathered at the NCAA Convention in Nashville.

The association does not prohibit transgender participation, but has yet to flesh out a formal policy. The International Olympic Committee announced in May 2004 that it had approved a transgender policy, which USATF then adopted in February 2005. Last May, the Washington Interscholastic Activities Association became the first high school sports governing body at the state or national levels to develop a transgender participation policy, tailored after that of the IOC.

"There has been a slow societal shift in terms of awareness, and we have sport organizations that are just beginning to deal with these issues at a policy level," says Ellen Staurowsky, associate professor of sports media and chair of the graduate program in sport management at Ithaca College, which will host the Sport, Sexuality and Culture Conference, including a panel on transgender athletes, next March. "As with so many social-justice issues, there's an enormous need for education. As coaches and administrators begin to gain awareness, they need to be addressing these issues and providing leadership, but oftentimes they don't have the kind of educational support and knowledge base necessary to feel comfortable dealing with them."

Few consider themselves transgender experts. Pat Griffin, director of the Women's Sports Foundation's education campaign for lesbian, gay, bisexual and transgender issues, and a frequent participant in NCAA-sponsored LGBT discussions, admits to having a steep learning curve herself. Still, she foresees a changing collegiate athletics landscape, one in which surgically and hormonally altered student-athletes play a part. "I think it's not far off on the horizon," says Griffin, who has learned through associates in education that the number of middle and high school students identifying themselves as transgender is on the rise. "And I think it's just a matter of time before some of them want to be able to continue their careers as athletes. There are more young people who feel the need to transition and who are getting the support of their parents. Athletic organizations that don't prepare for this or that take the attitude, 'This is just sort of a fringe thing and it's not going to affect us in any big way,' are asking for trouble."

A lawsuit could easily result from an athletic department's indifference, according to Griffin. "I think all kinds of issues could be raised, particularly in college, when the university has a non-discrimination policy that includes gender identity and expression, but the athletic department is completely unprepared as to what it needs to do to comply with that policy," she says.

Rare is the athletic department that has addressed the issue proactively. Eastern Kentucky University, for one, devotes a full page of its 72-page student-athlete handbook to the subject of transgender athletes, borrowing from IOC language regarding physical alterations and their impact on participation, while offering detailed athletic department positions on personal interaction (use of pronouns, name changes and name calling), access to locker rooms and bathrooms, team hotel accommodations and dress codes. "The fact that we didn't have any language whatsoever in our student-athlete handbook was a red flag to me," says EKU assistant athletic director for administration Corey Bray, who first included a transgender section in the handbook's 2006-07 edition. "I wanted to make sure that we addressed the issue appropriately before a situation came up, so that we had something to guide us."

Bates College didn't have a policy in place prior to Kelly Godsey becoming Keelin Godsey. And it hasn't put one in writing since, a fact perhaps attributable to a change in athletics administration, according to women's track coach Jennifer Hartshorn. At the time, Bates officials did consult with the NCAA and the National Center for Drug Free Sport, as well as with fellow New England Small College Athletic Conference institutions, for guidance and support, and released to inquiring media an 11-point FAQ document on Godsey's decision and its potential impact. "Keelin and I also gave team members every opportunity to come and talk to us about the situation," Hartshorn says, "but it really ended up being a non-issue for our team."

The same can be said of the NESCAC. "The conference unanimously agreed to stand behind Bates, and I think that was a weighty thing," says Bates sports information director Andy Walter. "I didn't want to feel like I had to explain what the situation was every time I corresponded with a fellow SID. To have them already on board with it was a big help."

Of course, pronoun parsing is one thing; a gonadectomy procedure is quite another. The IOC doesn't allow a transsexual athlete to compete in the Olympic Games without evidence that the external genitalia have been changed, the appropriate hormonal therapy has been administered to ensure equitable competition, and at least two years have passed since the surgical removal of the ovaries or testes. The latter stipulation brings up eligibility time-frame concerns at the high school and collegiate levels, according to Griffin, who says she hopes policymakers within those respective governing bodies don't automatically adhere to IOC language. There's also concern that gender-altering surgery isn't advisable for minors in the first place, and thus shouldn't even be mentioned in high school policies. But Griffin thinks the NCAA's position that a student-athlete be classified by the gender indicated in his or her official identity documentation (birth certificate, driver's license, passport) potentially represents an even taller hurdle. "Depending on what state you live in, you may or may not be able to change those official documents," she says. "We're talking about sports as a national activity, and when you have people from different states having different rules applied to their participation, that creates a tangle that needs to be straightened out."

What resolution Keelin Godsey's future holds is another mystery; he does not conduct media interviews about his transgender status. Female-to-male surgery, rarer than male-to-female, is expensive - topping $1 million, in most cases - and likely cost-prohibitive for Godsey, according to the Bates release. Besides, there's always 2012 and another Olympiad to shoot for. "For me to be in a fair competition, I have to compete as a female," he says in the release. "I could not compete versus men. It's a very hard task, especially in my field, which is mostly brute strength, plus technique."

Godsey has both, as evidenced in Eugene. "I don't know if Keelin plans to keep competing, but I think that the answer is yes," says Hartshorn. "He did great at the trials and has improved since college, so I don't see why he would stop now."