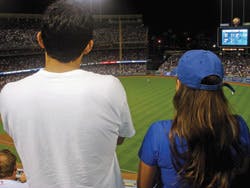 Courts in the United States do not make law; they interpret it. For example, when Congress passed the Americans with Disabilities Act (ADA) in 1990, it then became the job of the courts to interpret Congress' intent when it stated that the ADA prohibits discrimination against any individual "on the basis of disability in the full and equal enjoyment of the goods, services, facilities, privileges, advantages, or accommodations of any place of public accommodation."

To assist the courts, Congress required the Attorney General, the Department of Justice (DOJ) and other government agencies to develop guidelines on the law's meaning. Despite all the help, however, various courts still have reached alternative conclusions.

Robert Miller, a NASCAR fan who is a quadriplegic and uses a wheelchair, attended three to six events a year at the California Speedway in Fontana. When watching races from his viewing area in the grandstands, Miller's view of the track and cars was regularly blocked by fans standing immediately in front of him. Unable to fully enjoy the viewing experience, Miller filed suit, claiming in Miller v. California Speedway Corp. [536 F.3d 1020 (9th Cir. 2008)] that the Speedway had violated Title III of the ADA and a related DOJ regulation.

The district court, however, rejected Miller's claim and granted the Speedway's motion for summary judgment on the grounds that the DOJ had bound itself to the 1991 ADA Accessibility Guidelines (ADAAG) written by the Architectural and Transportation Barriers Compliance Board (commonly referred to as the "Access Board"), which did not address the question of lines of sight over standing spectators. Even though the DOJ clarified its position in a 1994 supplement in which it stated that facilities must provide lines of sight over standing spectators, the district court held that this new position was a fundamental modification of its previous interpretation and was therefore invalid.

On appeal, the Ninth Circuit Court of Appeals held that Congress' mandate to the office of the Attorney General was that it create regulations and standards applicable to facilities covered by Title III and that they "be consistent with the minimum guidelines and requirements issued by the Architectural and Transportation Barriers Compliance Board." The ADAAG's 1991 provision discussing assembly areas (Â§ 4.33.3: Placement of Wheelchair Locations) specified:

Wheelchair areas shall be an integral part of any fixed seating plan and shall be provided so as to provide people with physical disabilities a choice of admission prices and lines of sight comparable to those for members of the general public.

While acknowledging the problem of sightlines over standing spectators in sports arenas, the Access Board stated that the issue would be addressed in future guidelines, which were never developed. On the same day that the Access Board finalized its guidelines, the DOJ announced that it had adopted the ADAAG as the applicable accessibility standard.

In 1993, the DOJ, pursuant to Title III's directive to provide technical assistance to covered entities, published a Technical Assistance Manual (TAM). While the manual was silent on Â§ 4.33.3, the DOJ published a 1994 supplement that stated:

In overturning the holding of the district court, the Ninth Circuit held that it must give controlling weight to an agency's interpretation of its own regulations unless it is plainly erroneous or inconsistent with the regulation. As a linguistic matter, the appeals court held that it is perfectly reasonable to interpret the term "lines of sight comparable to those for members of the general public" as requiring lines of sight that are comparable in the actual conditions under which a facility operates. If spectators are widely expected to stand during the key moments of an event - from the singing of the national anthem to the fourth quarter - it does not take a fertile legal imagination to understand that relatively immobile patrons will not have a comparable line of sight.

Furthermore, the court ruled, the DOJ's 1994 interpretation is consistent with the statutory requirement that the facilities be readily accessible to and usable by persons with disabilities in the circumstances under which the event typically takes place (that is, with a standing audience) - otherwise, the facility is not "usable" as a practical matter. Because the DOJ's interpretation is a reasonable, practical construction in light of the ambiguity of the regulation, the Ninth Circuit ruled that it is entitled to substantial deference.

While it seems almost unbelievable that a court could interpret the law in any manner that would not require individuals sitting in the wheelchair area to be provided with a line of sight over standing spectators, previous federal courts that addressed the issue were split. Two courts, the District of Oregon (Independent Living Resources v. Oregon Arena Corp., 1997) and the Third Circuit (Caruso v. Blockbuster-Sony Music Entertainment Centre at the Waterfront, 1999), concluded that the DOJ regulations do not require lines of sight over standing spectators. By contrast, the D.C. Circuit (Paralyzed Veterans of America v. D.C. Arena L.P., 1997) and the District of Minnesota (United States v. Ellerbe Becket Inc., 1997) found that the DOJ's regulations do require lines of sight over standing spectators.

While it is hard to speculate, the Ninth Circuit's decision may well influence the interpretation of the ADA by future courts.