Soccer's biggest event may have heightened awareness of important advances to aid the African continent. 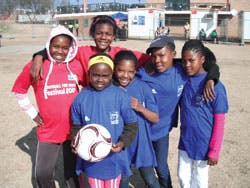 The 2010 World Cup legacy is already the subject of much debate. Will the new stadiums be used? Will South Africa's poor make any tangible gains as a result of their country's investment of $5.4 billion to stage the tournament? Although the recent news of unused, dilapidated facilities in Athens, Greece (host of the 2004 Summer Olympics) brought a sobering counterpoint to the South African government's blowing of its own vuvuzela, indications are that the Cup may have heightened awareness of several important advances that could aid the African continent in the immediate future.

One such advance comes courtesy of sOccket LLC, whose developers (four women who met in a Harvard University engineering class) went to Cape Town in July to demonstrate the sOccket 2.0 soccer ball, which uses an inductive coil mechanism to generate kinetic energy as the ball is kicked. Weighing 5 ounces more than a regular soccer ball, the sOccket 2.0 stores enough electricity in 15 minutes of play to illuminate an LED light (using its built-in DC socket) for about three hours. Funded by the Harvard Institute for Global Health, the Clinton Global Initiative and other unnamed investors, sOccket LLC plans to market the ball in the United States and Europe as a for-profit niche product and in Africa as a nonprofit product.

Also generating news during the World Cup was Atopia Research of Los Angeles, which on the eve of the tournament rolled out its prototype PITCH:AFRICA, a structure that serves as a soccer field and community center, as well as a giant water catchment system that filters and stores potable water. The field and stands (with seating for 1,000 people) are built over a semi-permeable membrane that captures rainwater and stores it beneath the field in cisterns. Atopia Research calls it a "man-made ecosystem" that can take advantage of a rainy season that in parts of the continent produces five feet of precipitation, capturing enough to provide clean drinking water for 1,000 people for a full year. Funded by the Annenberg Foundation, PITCH:AFRICA is designed so it can be built using local, readily available materials and components.