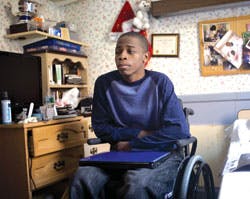 LOOKING FORWARD Blake Hunt plans to use his $8 million settlement from the city to pay for his college education.

Supervision is one of the most fundamental duties that coaches, athletic administrators and sports organizations owe program participants. In fact, when a player is injured and a lawsuit results, improper supervision or a lack of supervision are among the most common charges leveled against the defendants.

Defined broadly, the duty to supervise requires coaches and other athletic administrators to exercise a reasonable amount of care for the protection of participants under their control. The reasonable amount of care required for supervision, however, depends on a number of circumstances, including the sport being played and the age, experience, skill and physical condition of participants. This is especially true when supervising minors, since they can act impulsively, without appreciating the potential dangers of their actions.

Therefore, if a lot of young people are involved in a dangerous activity in which they have little or no experience, the athletic association or school will need to provide more than one coach in order to a) control the large group, and b) give more attention and direct instruction to all the participants. In considering whether an organization has provided proper supervision, the courts may also consider whether warnings of the dangers inherent in the activity were provided to the participants, whether the coach or instructor communicated and enforced rules of the game or activity, and whether the participants were equally matched for the sport or activity they were playing.

During a football scrimmage on Sept. 1, 2007, Flushing (N.Y.) High School senior Blake Hunt shattered the C5 vertebra in his neck when a running back's knee snapped his head backward. The collision left Hunt paralyzed from the waist down, and after receiving treatment at various New York hospitals, Hunt filed a complaint alleging that his injury stemmed from improper and inadequate supervision, training and officiating, and a lack of qualified medical personnel at the scrimmage. In particular, Hunt, who weighed 140 pounds, argued that he was too small to be competing against larger players and was already suffering from a leg injury when he was struck in the head by a player he was attempting to tackle. In addition, Hunt argued that he had not been trained properly and wasn't ready to participate in scrimmages or games when he was injured.

Hunt filed suit against the Department of Education, the Parks Department and the Public Schools Athletic League, but before the case could get to court, the three defendants settled the lawsuit for $8 million. In announcing the settlement, a spokeswoman for the New York City Law Department stated, "Given the particular facts of this case, the life-altering injury suffered by Mr. Hunt and the uncertainties of a jury verdict, we determined that the resolution of this case was in the best interest of all parties."

Had the case gone to trial, Hunt would have needed to show not only that his injury was reasonably foreseeable, but that it would have been prevented with proper supervision. Since the activity involved football, it would have been essential that coaches or school officials exercised greater caution for the protection and safety of participants. In addition, proper supervision would have required that the coaches or school made sure that Hunt was trained in the activity, and that medical personnel attended the scrimmage.

A second area of contention would have involved the manner in which the coaches matched participants in the scrimmage. Mismatching is a theory by which smaller, younger, less skillful and/or less experienced participants are injured while participating against larger, older, more skillful and/or more experienced players. In football, the most frequent issue raised regarding mismatching is that the coach or athletic organization breached its duty to protect the player against the risk of injury by staging games or scrimmages with players of different weights.

Finally, with regard to Hunt's claim of improper training, the courts require a higher degree of supervision during dangerous activities than with non-contact sports. If an activity were considered dangerous, a court would ask whether supervisors provided participants with proper training and instruction to familiarize them with the basic rules and procedures necessary to play safely.

The case's out-of-court settlement leaves a number of questions unanswered. For example, although Hunt only weighed 140 pounds, he was in his senior year and playing football against other high school students. Was this truly a case of mismatching? If this aspect of the case were decided in Hunt's favor, how could other high schools protect themselves from such lawsuits in the future?

While these issues remain unclear, the $8 million payment to Hunt makes it quite clear that the Department of Education, the Parks Department and the PSAL believed that their actions could be found negligent. That is a lesson from which every coach or athletic administrator can learn. Coaches and sports administrators should remember that, while they cannot ensure the safety of every participant, if the potential for injury is foreseeable and the presence of a supervisor might have prevented the injury, there is a good chance that they too could end up making a very costly payout.

A $10 million lawsuit brought by the family of Darren More, who was left permanently disabled by a head injury sustained during a 2004 Midget hockey game, has been dismissed by a British Columbia court. More, now 23, struck his head against the boards and suffered severe brain damage, leading his family to claim that the helmet he wore, manufactured by Bauer Nike and approved by the Canadian Standards Association, was insufficiently protective. However, provincial Supreme Court judge Malcolm Macaulay ruled there was no evidence that the helmet contributed to the injuries, adding that More, who had previously sustained concussions, was aware of the risks of injury because of both defendants' warning decals on the helmet. In keeping with Canadian law, the family has been ordered to pay the legal costs of both Bauer and the CSA.

The parents of a 12-year-old football player from Mansfield, Texas, have sued the North Texas Youth Football Association, alleging that an assistant coach severely injured their son's leg during a drill. Nicholas Banschbach, the lawsuit claims, was negligent when, in November 2008, he swung a tackling dummy toward Ryan Spence's legs during a drill intended to teach players how to avoid illegal blocks. The lawsuit, seeking more than $50,000, also names as defendants the team's head coach and the Mansfield Peewee Football Association, an affiliate of the NTYFA, and alleges that all three defendants failed to properly supervise and train their staff, and failed to have adequate policies and procedures in place to dictate appropriate drills.