Nothing says "celebration" like the unveiling of new design standards and revisions to existing federal regulations. But that's how President Barack Obama and the U.S. Department of Justice framed the 20th anniversary of the Americans with Disabilities Act in a ceremony last July. 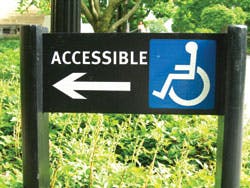 The 2010 Standards For Accessible Design are forcing many agencies to conduct an access audit. (Photo Â© Ivy O. Lam/iStockphoto.com)

Nothing says "celebration" like the unveiling of new design standards and revisions to existing federal regulations. But that's how President Barack Obama and the U.S. Department of Justice framed the 20th anniversary of the Americans with Disabilities Act in a ceremony last July. Specifically, the DOJ unveiled revisions to ADA Titles II and III and issued the 2010 Standards for Accessible Design, all of which affect various components of public recreation facilities, including fitness centers, pools and playgrounds.

Although last July's announcement has led to its fair share of speculation, confusion and misinformation among administrators in the public recreation industry, ADA experts warn that ignoring 2010 changes altogether could be perilous. "This is a huge issue for people in recreation," says John McGovern, president of Hoffman Estates, Ill.-based Recreation Accessibility Consultants. "It's incredibly important for people to become more aware of these requirements."

Hypothetical policy questions related to the new definition may include, "What does control mean - does it mean on a leash? Does it mean voice control?" and these and more should be addressed in staff training.

As for power-driven personal mobility devices, commonly known in ADA parlance as EPAMDs - which may include such devices as Segways - Title II now requires that agencies have a policy in place that regulates, and does not prohibit, their use. "A typical policy might require that the user be a person with a disability, and it might include a speed limit," McGovern says.

Creating the policy is the first step; staff training is the second. "With both EPAMDs and service animals, the Department of Justice has limited the number of questions you can ask to two," explains McGovern. "If I ride a Segway or bring a dog into a fitness center, the person behind the counter can say, 'Are you using that device or animal because you have a disability?' If I say yes, the person can ask me for proof, but if I say I left my proof at home or somewhere else, and nothing I am doing contradicts the statement that I am a person with a disability, they have to accept that statement. I discourage them from even asking that second question."

A third change affecting a number of recreation agencies is a requirement to have what are known as telecommunication devices for the deaf (TDDs). Essentially, this may require a software addition to automated agency phone systems that allow impaired users to have their tone of voice recognized so they can interact with the phone system in real time.

To be clear, a major component of 2010's ADA changes affecting recreation, the adoption of the 2010 Standards for Accessible Design, reflects little departure from industry design standards that have been established for the better part of a decade.

In short, designers of most types of recreation facilities have had ample time to learn and adapt to the Access Board's established guidelines. Yet, says McGovern, "It's pretty common to see facilities that have been built in the past five years that still don't follow them."

The DOJ has now compiled those guidelines - with some minor additions and revisions - into one source, the 2010 Standards for Accessible Design, and the real issue now facing parks and recreation administrators is how the DOJ now plans to apply those standards.

As McGovern explains, the publication naturally divides facilities into three categories. Those built between 1992 (when ADAAG came to be) and Sept. 14, 2010 (the day before the 2010 standards were added to the national registry), were "absolutely, positively" bound to ADAAG. "Those guidelines govern traditional built environment spaces like restrooms, parking lots, doors, hallways, water fountains, locker rooms, turnstiles and cashier's counters, but there were no recreation requirements in the 1991 ADAAG standard," McGovern says. "You could have had a parks and recreation department that built a new swimming pool. In theory, they would have made the parking lot accessible, the side lots accessible, the entry counter accessible and so on, but there were no requirements that would actually get someone into the water."

Category two comprises facilities built between Sept. 15, 2010, and March 15, 2012, the date when the standards officially take effect for new construction. Facilities in this category essentially have the option of following the traditional ADAAG standards alone or complying fully with the 2010 standards. McGovern recommends the latter in virtually all cases. As an example, he says accessibility standards for wading pools are addressed for the first time ever in the 2010 standards. "A wading pool being built today needs to have a sloped entry," he says. "If it doesn't, come March 12, 2012, my brand new wading pool is going to become instantly noncompliant. This reality is probably going to result in a lot of change orders for projects that are currently on the drawing board, or even for some projects where ground has already been broken and construction has started. But I would rather change it now, before the ribbon cutting, than have to go back in August 2012 and try to retrofit an existing building."

The third category of facilities affected by the DOJ's adoption of the standards consists of those that will have their first occupancy after March 15, 2012. Obviously, those have no choice but to follow the 2010 standards.

Another important consideration in this interim period between the announcement of the standards and their date of application is that, according to the Title II revisions, public recreation providers need to evaluate their existing facilities against the 2010 standards and, in most cases, devise a concrete plan for compliance. "Agencies need to get out there and look at their existing playgrounds, swimming pools, fitness centers and golf courses," McGovern says. "The result should be a list of every deficit, a proposed solution for every deficit, on what dates those solutions are going to be implemented and who specifically in the department is responsible for each one."

A related and important issue is the so-called program access test, described in section 35.150 of the title II regulation, where it is made clear that not necessarily every similar site must be made accessible after the access audit. "But what isn't clear is how many similar sites must be corrected," McGovern says. "If an agency has 10 playgrounds, is one enough? Is five enough? This varies agency by agency, site by site, and reflects resources, ease of change, use, and other factors."

McGovern says such an access audit is no different than what facilities of all types went through with common barriers such as staircases when the ADAAG guidelines were published. "Even though a lot of agencies have met the 35.105 access audit requirement for the built environment, there are many agencies that have not done so for their recreation environments," he says.

The question McGovern most often fields from recreation administrators lately is, "How long do I have to comply?" Given that the DOJ hasn't explicitly stated the answer to that question, McGovern says there's little to suggest that agencies won't be given a three-year grace period to make their facilities accessible, a process that has been fairly commonplace since 1992. "But don't wait," he says. "If March 15, 2011, rolls around and you don't already have a plan in place for how you're going to get your access audit done, you're already behind."