The contract required Gulf States Toyota to pay approximately $5 million per year in exchange for naming rights and a lighted Toyota logo on the roof of the facility. Clutch City installed a red-lighted outline of the Toyota logo on the facility's roof using Plexineon light emitting diode (LED) strips manufactured by iLight Technologies Inc. 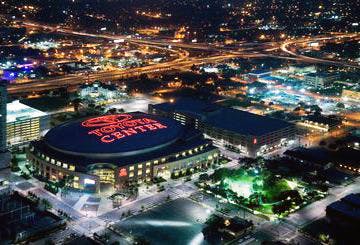 In both 2007 and 2009, fires involving the Plexineon LEDs occurred on the Toyota Center roof. After both fires, repairs were made to the sign, but after the 2009 repairs, Clutch City staff noticed that other sections of the sign had melted. For safety reasons, Clutch City decided to permanently cease illumination of the sign and requested that iLight replace the sign entirely at iLight's expense. iLight declined to replace the sign without charge, asserting that Clutch City used a pressure washer and bleach solution to clean the sign, resulting in both corrosion and deterioration of the lights. Clutch City declined an offer by iLight to replace the damaged portions of the lights at a reduced cost. In August 2011, after two years of unsuccessful negotiations with iLight regarding replacement of the damaged sign, Clutch City paid $168,434.61 to have several hundred feet of the sign replaced.

Ultimately, Clutch City sued iLight for strict product liability (both manufacturing defect and marketing defect) and negligence, alleging that iLight's defective manufacturing process resulted in electrical shorts in the LED strips that caused the fires. Further, Clutch City alleged that iLight was aware of defects in the LED lights and failed to warn Clutch City of the defects. As damages, Clutch City requested the cost of the roof repair from both the 2007 and 2009 fires, as well as loss-of-use damages. The trial court jury rendered a verdict for Clutch City, awarding damages totaling approximately $2.5 million. The damages awarded included sign repair expenses, and approximately half of the alleged loss-of-use amount.

However, in 2013, in the case of iLight Technologies, Inc. v. Clutch City Sports and Entertainment, L.P., 01-12-00574-CV, the Court of Appeals for the First District of Texas reversed the damage award, holding that "the evidence was legally insufficient to support the jury's affirmative liability findings for strict liability manufacturing defect and for negligence."

While the appellate decision in this case focused entirely on the sufficiency of evidence regarding various product liability claims, this case is still particularly relevant for sport facility operators.

THE NAME GAME
Technological advances in advertising mediums offer sport venues a multitude of unique platforms to include in sponsorship agreements, but with increased technology comes increased risk of defect or malfunction. In the Toyota Center case, Toyota upheld its financial responsibility under the original naming rights agreement, and accepted the loss-of-use substitutions offered by Clutch City. However, Clutch City was forced to negotiate the loss-of-use reparations after the fact, as the potential loss-of-use was not adequately addressed in the original agreement.

Naming rights agreements involving sport venues have become the norm and most contracts for such agreements contain standard provisions. Facility operators, however, must communicate with legal counsel to ensure such agreements specifically address the myriad issues that can result from including digital signage platforms in naming rights agreements, as well as the responsibilities of each party in the instance of signage malfunction. Standard practice assigns responsibility for care, maintenance and function of digital signage to the facility operator; and as owner/operator of the venue, such responsibility is appropriate. Naming rights agreements must still specifically address the potential for signage defects and loss-of-use related to malfunctioning advertising mediums.

In addition, sport facility operators must carefully consider potential consequences of maintenance practices on signage technology, especially when unique digital platforms such as rooftop LED signs are used. In the Toyota case, iLight claimed that the maintenance practices used to clean the roof of the Toyota Center and the LED sign caused corrosion and deterioration of the sign, thus resulting in two electrical roof fires. While the Texas Appellate court did not find sufficient evidence regarding the cause of the rooftop fires, the cleaning method used on both the roof and the sign was used as a primary defense by iLight in the case. Given the high profile and high value of digital technology, proper maintenance practices must be understood, ensured and documented upon completion. Proper maintenance lowers the risk of sign malfunction and, more important, lowers the risk of an operator-negligence claim should malfunction occur.

While the holding of the Toyota Center case does not specifically impact other facility operators, the facts and appellate outcome serve as a reminder that the sponsorship contract must be negotiated with specific facility concerns in mind as to lessen the potential for future conflict.

Houston's most infamous naming rights scandal involved its professional baseball stadium, formerly known as Enron Field. After the Houston energy company was caught in one of the worst corporate scandals in American history, the Houston Astros bought back naming rights for $2.1 million, before selling them to Coca-Cola’s Minute Maid subsidiary in 2002 for $100 million over a 28-year period.

This article originally appeared in the September 2014 issue of Athletic Business under the headline, "Putting Out Fires."