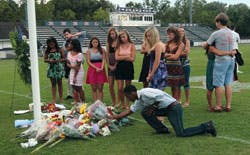 BROKEN HEARTS Students from West High School in Knoxville, Tenn., held a memorial for Jake Logue, a football player from Kingsport South High School who collapsed on West's field during an Aug. 21 game and died of apparent cardiac arrest.

The 2009 high school football season had barely begun when at least four players died on the field. Even though all autopsy results were not available as of this writing, much of the early speculation in two of the deaths focused on the players' hearts.

Jake Logue, a senior all-conference defensive tackle and offensive lineman from Sullivan South High School in Kingsport, Tenn., was playing in an Aug. 21 game when he made contact with an opposing player, chased the ball carrier and then collapsed. Local emergency personnel confirmed that Logue was in cardiac arrest while being transported to the hospital.

Three weeks later, Kevin Telles, a senior fullback and linebacker from Garden Grove (Calif.) High School, died after dropping to the field and convulsing during a Sept. 11 game. His coach said Telles was not hit before he went down, and the Garden Grove Journal reported that he died of "apparent heart failure."

The number of young athletes stricken by sudden cardiac arrest - typically caused by an abnormality in the heart's electrical system, an enlarged or thickened heart muscle, or a blow to the chest - varies depending on which organization you ask. Even more divisive are discussions about whether student-athletes should undergo mandatory pre-participation heart screenings, complete with an electrocardiogram.

Such a decree would be cost-prohibitive for most schools - although in the past, at least one state high school athletic association (the Texas University Interscholastic League) was able to secure corporate sponsorships and the free services of local physicians to cover EKG equipment and testing, which was conducted at large, centrally located venues to which student-athletes were bused. "But do you do an EKG on five million kids to find 15 cases?" Robert Eckel, past president of the American Heart Association and professor of medicine at the University of Colorado Denver's School of Medicine, asked the Associated Press not long after Logue's death. "It's a matter of cost and benefit."

The American Heart Association currently recommends a physical exam and family history questionnaire as the first layer of screening, with further examination based on those results. Symptoms that indicate the need for additional evaluation include an abnormal heart murmur, fainting or dizziness (especially during or immediately after exercise), skipping or racing heartbeats, excessive fatigue or shortness of breath associated with exercise, unusual chest pain or discomfort during exercise, high blood pressure, close relatives with heart conditions or the premature cardiovascular-related death of a close relative under the age of 50.

But even then, hypertrophic cardiomyopathy - the most common of genetic heart conditions, which thickens the heart muscle - can go undetected in routine screenings. "That's the thing," says Bob Colgate, an assistant director of the National Federation of State High School Associations, who also oversees that organization's Sports Medicine Advisory Committee. "Someone can have all these tests done, they may not show anything, and then the person could collapse. But then again, they also may detect something that otherwise could have gone undetected. It's not a perfect system. You just don't know sometimes."

According to the Minneapolis Heart Institute Foundation's Sudden Death In Athletes project, a recent study of 134 athletes who died suddenly from a variety of cardiovascular diseases showed that only three percent of those individuals were suspected to have cardiac disease, as determined during exposure to standard pre-participation screenings. A total of 1,866 athletes between the ages of 8 and 39 in 38 sports either died suddenly from or survived cardiac arrest in the United States between 1980 and 2006, MHIF says.

There is no universally accepted standard of care for the screening of high school and college athletes in the United States, MHIF officials say. Nor are there approved certification procedures for medical professionals that perform such screenings - meaning that chiropractors, nurses, physician's assistants and perhaps untrained individuals can oversee such examinations. Additionally, almost 40 percent of all states either do not have recommended medical forms to serve as guidelines for pre-participation examinations, or the forms used are considered inadequate by the American Heart Association, says Barry Maron, director of the MHIF's Hypertrophic Cardiomyopathy Center, which maintains the Sudden Death In Athletes U.S. Registry.

By contrast, every athlete in Italy - from elementary-school age to the professional level - is required by law to undergo a pre-participation EKG. But an official with the Italian Institute of Sports Medicine and Science, an arm of the Italian National Olympic Committee, acknowledges that severely abnormal results appear in only a small percentage of individuals.

"Overall, the pre-participation screening process, as it is currently structured and carried out in the United States, generally lacks sufficient power to consistently recognize clinically important cardiovascular abnormalities in many athletes," notes the SDIA's web site. "It is clear that a series of definitive research studies are required to draw reliable conclusions to design the best system for screening of athletes."

"Schools think that as long as a player gets clearance from a local doctor, everything is fine," says Keith Mankowitz, a cardiologist at Washington University who holds free educational seminars about sudden cardiac arrest for St. Louis-area school officials, coaches, parents and players. "But the problem with that is that some of the people doing the screening are not doctors, and they've never been trained how to screen. So I think everybody is under a big misconception."

On Aug. 18 in suburban St. Louis, Anthony Troupe Jr., a 13-year-old youth-league football player who stood 6-foot-2 and weighed 383 pounds, fell to the ground while running a lap at the start of practice. He died an hour later. An autopsy revealed that the boy suffered from hypertensive cardiovascular disease, or high blood pressure - a condition that the American Heart Association says often goes under-diagnosed, and which claimed Troupe's father's life at age 45.

Carol Howard, Troupe's mother, informed local reporters that the boy always underwent routine medical exams before playing sports. "It was a very basic physical, blood pressure, height and weight, they'd listen to his heart," she told the St. Louis Post-Dispatch. Troupe even had undergone an EKG several weeks earlier, after falling unconscious in the street near his mother's home while tossing water balloons with friends. Doctors chalked up that incident to dehydration.

Seven days before Troupe died, Mankowitz hosted one of his educational sessions at a St. Louis-area hotel - telling attendees about the risks involved with exercise and stressing the importance of physicians filling out AHA-approved pre-participation forms, teaching coaches to take player complaints of chest pain and increased shortness of breath seriously, explaining how to resuscitate kids who collapse and pledging to help schools find ways to purchase automated external defibrillators.

Invitations were sent to hundreds of schools, Mankowitz says, but fewer than 50 people showed up. And while he admits that future sessions need to be promoted better, he does not hide his frustration. "I thought this would be easy," Mankowitz says. "I thought I'd have one or two talks with coaches and parents, and then we'd be done. There seems to be some apathy."

The UIL - which in 2007 became the first state high school athletic and activity association in the country to require all of its member schools to house at least one AED - mandates that every student-athlete use a standardized pre-participation medical examination form. Based on AHA guidelines, it is updated regularly and available on the organization's web site. Currently, 10 questions specifically address cardiac health; if a student-athlete answers "yes" to any of them, further medical evaluation is automatically required, and written clearance from a physician is needed before that individual can participate in sports. "We've tried to be active in making sure people are aware of what can happen," says Mark Cousins, director of policy for the UIL. "We think having a standardized form really works."

Sudden cardiac arrest (along with concussions) tops the priority list of the National Federation's Sports Medicine Advisory Committee, which includes four doctors and four certified athletic trainers. The topic was discussed at length during the committee's semi-annual meeting in October. And while it could recommend that all state associations follow Texas' lead and obligate member schools to use standardized forms for pre-participation physicals, there's no guarantee all states and schools actually will. Instead, council members say they simply will continue to monitor the medical community's research.

"Is there more we can do?" Colgate asks. "Is there some additional guidance we can provide? I really don't know."