Not overly intense but still electric, this stylized wall treatment casts a glow throughout the lobby of Penn State's Recreation Hall. 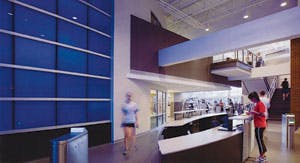 Why aren't the TV screens on?" is sometimes the response to this backlit wall in the lobby of the Recreation Hall wrestling and student fitness addition at Penn State University. In fact, though, it's simply a stylized wall treatment designed by Pennsylvania-based L. Robert Kimball & Associates to lend character to what would ordinarily be a relatively dark, deep interior space. Located behind the check-in desk, it's constructed using a storefront-style laminated-plexiglas system with a layer of colored film within and clusters of compact fluorescent bulbs behind. Not overly intense but still electric, the wall enlivens the Penn State blue and casts a glow throughout the lobby. It also draws attention to the lobby space's height, which is carried through in the two-story fitness center (immediately beyond the check-in desk in the photo) that is the facility's centerpiece.