Who Cares What Building Was the First to Receive LEED Certification?

What was the first building to achieve LEED certification? Who cares? 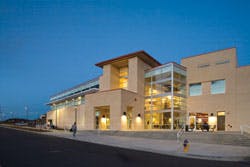 Firsts fade. Example: just about everybody hits 20 home runs these days, so nobody remembers the first professional baseball player to crack that many in a season.

No, really. If NFL teams were to go undefeated every year, people would remember the 1972 Dolphins as the answer to an obscure trivia question. The rarer the achievement, the greater the staying power. Miami is remembered not as the "first," but as the "only."

If it hasn't already, the issue of who was first to achieve LEED certification is going to be an answer to a trivia question so obscure it crosses over into minutia. It can't happen soon enough for this observer. Hardly a month goes by during which we don't get a press release trumpeting this or that new athletic or recreation facility, which when it opens will be the first LEED-certified something or other. This is both presumptuous and misleading - LEED status is not assured until the U.S. Green Building Council tests the facility, through an inspection that usually takes place between six and 12 months after the facility has opened, and ascertains that the building functions as was promised when it was designed. 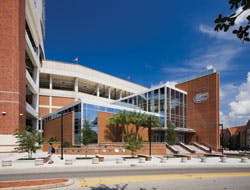 Also annoying is that, as LEED certification has become more commonplace, the first-place claims have become increasingly compartmentalized. There's the first higher education building in Maine, or Maryland, or Colorado; the first college rec center east of the Mississippi; the first high school; the first public high school; the first public high school in a state ending with the letter "a" - you know, that sort of thing. In January, the contractor for the Florida Marlins' soon-to-be stadium boasted to The Miami Herald that it would be the country's first LEED-certified stadium with a retractable roof - as if that mattered. Once you add to the mix LEED's four distinct levels (platinum, gold, silver and plain old certified), you end up with dozens, if not thousands, of possible permutations.

We're going to resist the urge to channel Clint Eastwood in "Unforgiven" here (pressed to recount who was the first of the five men he gunned down, Eastwood's character brandishes his weapon toward the questioner and sneers, "I could tell you who was last"). Instead, for the sake of future generations of scholars and trivia buffs, here is a list of firsts that with any luck will settle all lingering arguments: 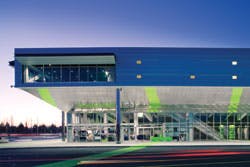 There are two firsts possibly on tap for 2010. The University of Arizona Student Recreation Center Expansion is aiming to be the first college recreation building in the nation to reach LEED Platinum; as of November, it was thought to be solidly Gold and one point away from the highest designation. And, the CONSOL Energy Center in Pittsburgh, home of the NHL's Penguins, hopes to be that league's first LEED Gold arena.

A third first for 2010 is really a second - and possibly a third. Drury University and the designer of its O'Reilly Family Event Center claim that the building (still under construction) will be the country's first arena to obtain LEED Gold - but, as noted above, ShoWare Center is the answer to that trivia question. Unfortunately for the folks at Drury, the higher-profile Matthew Knight Arena at the University of Oregon may also beat it to the finish line; Kacie Renc, a project executive for JMI Sports, the San Diego firm that is managing the development of the Oregon arena, told Eugene's Register-Guard last summer that the Knight Arena "is deep into the Silver . . . and just on the cusp of Gold."