A roundup of groundbreakings, grand openings and building projects in development 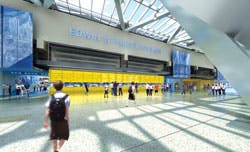 On June 28, one year to the day after launching a $100 million fundraising campaign to renovate and expand UCLA's Pauley Pavilion, Bruins officials and dignitaries celebrated the project's groundbreaking. Designed by the Los Angeles office of NBBJ, the renovation will transform the 1965 building into a state-of-the-art multipurpose facility. Plans call for a new enclosed exterior concourse with a grand entrance; integrated graphics showcasing the UCLA athletics legacy; a reengineered seating bowl with better sightlines; a re-centered court flanked by newly upholstered and padded seating, as well as a new student section; expanded concourse, restroom and concessions areas; a new digital scoreboard; a new subterranean building featuring locker rooms; and the integration of cutting-edge sustainable features. While enhancing the industrial aesthetic of the existing building, the exterior design will integrate terra cotta rainscreen panels, glass curtainwall, frosted channel glass, glass overhead folding hangar doors and precast concrete panels. The existing iconic roof trusses will be visible from all sides, and a new lighting system will highlight them. The project is expected to be completed in the fall of 2012. . . 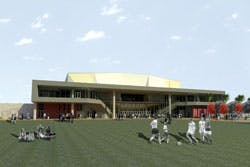 Grand Canyon University has broken ground for a 5,000-seat multipurpose Event Center that will fill a local void of midsize event venues and serve as the new focal point of the university's expanding Phoenix, Ariz., campus. Designed by Kansas City-based 360 Architecture and Tempe-based Architekton, the 135,000-square-foot facility will provide a competition venue for the Antelopes' basketball programs and host concerts, conferences, and regional and statewide sports events. The project represents the final phase of a two-year, $60 million expansion of the campus, including a new four-level residence hall and a new 55,000-square-foot recreation center, which is opening this fall. . . 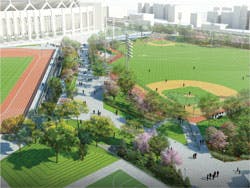 In late June, the New York City Economic Development Corporation and the city's Department of Parks and Recreation broke ground for Heritage Field, a 10.78-acre park located on the site of the original Yankee Stadium, directly next to the Yankees' new home in the Bronx. Designed by Stantec and New York-based Thomas Balsley Associates, Heritage Park will feature numerous competition-quality grass fields, new bleachers, a comfort station and a playground. The southernmost field will be aligned with the original stadium's footprint, and additional fields will provide space for baseball, softball and track events. Commemorative elements include a series of plaques, a restored segment of the original frieze, the outline of the original playing field, and photographs and other graphics throughout the park. Expected to be completed by the end of next year, the park will be the largest component of more than 32 acres of new and renovated parks in the Yankee Stadium Area Redevelopment Project.

In June, the Auburn Board of Trustees unanimously approved the construction of a 73,500-square-foot wellness center for the Auburn University at Montgomery campus. Funded largely through student fees, the facility will feature a pool, a fitness center, a gymnasium and a climbing wall. In a separate action, the board also approved construction of a 92,000-square-foot, $16 million indoor practice facility for numerous sports at the university's main campus. . .

Since purchasing existing ball fields and a recreation building, the Webster, N.Y., Town Board has authorized a bond issuance of $5.5 million to expand the recreation center. . .

In Germantown, Md., the 6,762-square-foot Plum Gar Recreation Center is one of four rec centers operated by Montgomery County that may be rebuilt as a green facility, according to county planning board documents. . .

The Calgary, Alb., Community and Protective Services Committee has given its thumbs up to a plan to build a massive indoor multisport facility. City leaders are exploring partnership opportunities for the approximately $450 million (Canadian) facility. . .

Hoping to determine whether there is community support for a new aquatics center, the Naples, Fla., city council has challenged a citizens group to raise $500,000 in donations toward the project. . .

The University of West Florida has hired an architecture firm to help devise a master plan for its athletics facilities. . .

The mayor of Muncie, Ind., has pledged his support for a park bond issue of $2 million toward a citizen-led effort to construct a $6 million to $7.5 million recreational waterpark. . . 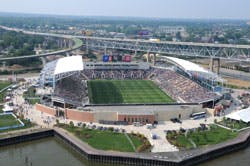 After playing their first two home games at Lincoln Financial Field, Major League Soccer's newest team, the Philadelphia Union, moved into their soccer-specific home stadium in June. The $122 million PPL Park, designed to serve as a catalyst of a $500 million waterfront revitalization in urban Chester, Pa., features a seating capacity of 18,500 for soccer matches and 26,000 for concerts. Other amenities include 30 luxury suites and an 11,000-square-foot full-service club restaurant, LED signage and "experiential zones," sideline roofs that protect spectators from the elements, expansive grass areas and large promenades surrounding the stadium for tailgating or outdoor music festivals, and a built-in concert stage.