About eight years ago, Xcel Energy of Colorado paid a visit to the Longmont headquarters of Avedon Engineering, a custom manufacturer of injection-molded plastics. 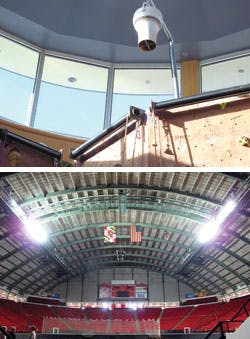 Air Pears can be dangled above climbing walls, like this one at the Longmont (Colo.) Recreation Center (top), or made to virtually disappear among catwalks, as is the case at the University of Maryland's Cole Field House. (Photos courtesy of Airius)

About eight years ago, Xcel Energy of Colorado paid a visit to the Longmont headquarters of Avedon Engineering, a custom manufacturer of injection-molded plastics. Xcel technicians wanted to confirm that their client's 165,000-square-foot facility was, in fact, still open for business and to personally inspect the functionality of the company's gas meter. Something had to explain a 42 percent drop in Avedon's natural gas consumption over a five-month period.

The answer could be found overhead in the form of funnel-shaped plastic appliances tucked among the facility's rafters. Avedon engineers, aware every time an overhead lighting fixture required maintenance that air temperatures at the mezzanine level were a good 20 degrees warmer than those on the manufacturing floor, had gotten an idea. They developed an appliance with internal impellers to create a small jet stream that penetrates and stirs surrounding air to within a top-to-bottom tolerance of three degrees, all the while running on less than 400 watts. The Xcel Energy inquiry served only to confirm their success. "At that point, we realized we had something that had value," says C. Scott Canby, who handles project management for Avedon offshoot AiriusÂ®, maker of what has come to be known as the Air Pear Thermal Equalizer.

Dozens of Air Pears (each unit resembles a piece of the fruit, only upside down) are now hanging in the rafters of the University of Maryland's Cole Field House, for example, as well as in indoor athletics, fitness and recreation facilities around the country. The higher the ceiling, the more air destratification makes economic and environmental sense.

"Heated air from a forced-air system is less dense than the cold air in the space, and it will all settle at the ceiling level," says Alex Reed, marketing project manager at Big Ass Fans, a Lexington, Ky.-based industrial ceiling fan manufacturer. "So the heater has to keep running if it wants to achieve a certain temperature at the ground level, or at least at the thermostat level. Fans just direct that hot air to the floor."

Unlike the impellers found inside the Air Pear, the largest model of which measures less than 20 inches in diameter, the biggest of the Big Ass Fans spans more than 24 feet, perhaps best illustrating the diversity of destratification technology available today. The paddle fan concept is certainly most familiar, given its popularity in residential applications, but commercial fans don't necessarily function in the same way as home ceiling fans.

Home ceiling fans typically come with three speeds and a reverse function, recommended for wintertime use, that pushes warm air up to and along the ceiling and down walls. "On an eight-foot ceiling, that will work," Reed says. "But when you get in these big athletic facilities, where you have ceilings of 30 feet, 50 feet and higher, you're not going to be able to get the heat down pulling it that way, and if it's not a well-insulated space, it's going to escape through the roof." 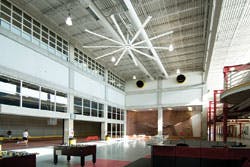 One of dozens of Big Ass Fans installed within Iowa State University's Lied Recreation Athletic Center, this unit pushes warm air down to the floor and into surrounding activity spaces. (Photo courtesy of Big Ass Fans)

The typical large-scale fan - known in the industry as a high-volume, low-speed fan - doesn't have a reverse switch, and it is most often run at a fraction of its maximum speed capability. That way it pushes warm air downward and outward without creating a perceptible draft. In the interest of fan motor efficiency, blades on Big Ass Fans also feature winglets to slice through air vortexes that form at the fan's rotational reach.

Meanwhile, the Air Pear employs what Canby refers to as a reverse set of fins underneath its internal fan to remove as much turbulence from air being pushed as possible. This allows the air to be forced downward in a focused column (as compared to a ceiling fan's relatively conical air-dispersion pattern) to the facility floor, where it is then dispersed in all directions. "It's that column that does the work," Canby says. "The secret is that we only have to move that column; we don't have to move all the air in the room or that big cone of air. By mixing the air uniformly floor to ceiling, wall to wall, the result is improved efficiency of the HVAC system."

At 45 pounds, the heaviest Air Pear model will not tax existing roof structures, and each appliance can be installed in or moved to any location on a ceiling within reach of an AC outlet. Says Air Pear marketing director Duke DiPane, "You can tuck it right up to the ceiling deck where the heaviest stratification is."

But while the Air Pear 100 (one of six free-hanging model sizes) specifies a maximum installation height of 100 feet above floor level, Reed reports a Canadian high-rise installation of Big Ass Fans at 150 feet. In that case, with fans running at full speed, a 30-degree temperature difference between ceiling and floor was reduced to less than five degrees. "You do have to run them at a higher speed if you're going to go up over 100 feet," Reed says, "but you can achieve the same thing, essentially, which is getting that hot air down there without creating a draft."

According to Reed, a client could see full payback of its HVLS fan investment in two to five years, with a one-year payback "not impossible." He points to the Minnesota Vikings, who in one heating season realized savings of $16,000, or roughly what it cost to install two 24-foot fans in their practice facility. (Canby says payback on an Air Pear installation falls within the two- to three-year range.)

While the Vikings case is exceptional, all fan users can expect to see their greatest savings during winter months. "That's typically when we see our quickest payback," Reed says. "In the summer, it's going to be user-dependent. If they want to dial the thermostat up a few degrees because they feel more comfortable with the fans, then they're going to save money. But in the winter, the heaters are going to work less. It's sort of an involuntary response to the fans keeping the heat at the thermostat level."

Reed admits that for many people this represents a departure from their understanding of ceiling fans foremost as cooling instruments. That's not to say that large-scale industrial fans are incapable of effectively cooling a space. The agriculture industry saw the technology's earliest applications as a means of keeping livestock comfortable. The thought soon became: What's good for cows can't be all bad for humans exerting themselves along assembly lines or inside field houses. The football practice facility at the University of Louisiana, Lafayette, which was built only with exhaust fans, was rendered unusable all too frequently by suffocating interior temperatures until overhead fans were installed. "The exhaust fans will take a little bit of the heat out, but they're not going to move the air around," Reed says. "If you don't have anything pushing the air toward the exhaust fans, a lot of it is just going to sit there."

Reed goes so far as to suggest fans can replace air conditioning, particularly within large metal structures. "Sometimes, it's not cost-effective to air condition," he says. "It's a great luxury if you can, but to install and then operate it, the cost is not going to be feasible for a lot of schools and athletic facilities." 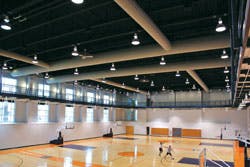 Fabric ducts, like these DuctSox at the University of Illinois, provide end users with a variety of green benefits. (Photo courtesy of DuctSox)

Some facilities, at least, attempt to move air with a roof-mounted HVAC unit specified with a single diffuser throwing air in four directions at the ceiling level. That's a mistake, according to Nick Kaufmann, sales and product engineering manager for DuctSox. Kaufmann recently commissioned Iowa State University to test the aforementioned configuration against one employing the fabric air ducts that his company manufactures, and the ISU engineers found that a ductless HVAC system has to run 24 percent longer to bring a space to the desired temperature. "Even air distribution is very important," Kaufmann says. "The more even you can keep it, the faster you bring the air up to temperature."

Not surprisingly, Kaufmann also disagrees with the suggestion that a facility can adequately handle air using only a four-way diffuser and some mode of destratification. "Don't get me wrong, the destratification fans - either the high-volume, low-speed ones or the jetted ones - do a great job of mixing the air," he says. "I can't count the number of gyms I've walked into that could use those, because the gyms have the 40-foot-tall ceilings, and they have the returns low or they only have the returns midway up, and there is a temperature difference. Those things can definitely save energy, but the key is they have to work hand-in-hand with ductwork, because each has their own separate function."

For their part, DuctSox ducts function differently than traditional metal ductwork. Instead of diffusers spaced every 20 feet or so along a run made of metal, a fabric duct is perforated with holes every inch or so, with holes ranging in size from a quarter-inch in diameter to five inches. Says Kaufmann, "Instead of hot spots and cold spots, we let air out linearly the entire length."

But the green benefits of fabric ducts stretch beyond even air dispersion, adds Kaufmann, a LEED-accredited professional. Because it is collapsible, an entire custom-sized fabric duct system can be shipped in a UPS box, compared to the flatbed trucks needed to transport metal ducts, which then have to be cut to fit onsite, with substantial material waste potential. Fabric ducts also weigh a fraction of what their metal counterparts do (as little as one-tenth as much, Kaufmann says), requiring no special load tolerance considerations in terms of the roofing superstructure, which can equate to considerable material savings for new construction projects.

In a macro sense, the green movement is about preserving our global environment, but facility operators are discovering that they can do their small part on that front, even as they improve the environment immediately under their own roofs. And while indoor air destratification is not a new concept, manufacturers are finding new ways to apply the latest technologies to athletic, fitness and recreation envelopes and activities.

Among the most recent innovations: Big Ass Fans has introduced a product that pivots, allowing for directional airflow to sweep the entire length of an indoor track's straightaway, for example, as well as fans suitably sized for hanging as low as 12 feet above the equipment on a cardio fitness floor. And Air Pear applications have ranged from the soaring ceilings of climbing gyms to natatoriums, where units are angled from above the pool deck to help circulate off-gassed chloramines at the water level. Says Canby, "People recognize it's not only an energy-conservation tool, but it keeps people in those areas a little more comfortable."