Among the most visible legacies of the Older Americans Act of 1965, a spate of senior center construction produced facilities intended to provide educational and recreational services, and to serve as hubs for the delivery of community-based social services. For a generation, senior centers were more community than rec — multipurpose rooms that could host community and family gatherings, bridge games and bingo nights.

Beginning in the mid-1990s, when the term "older adult" came into vogue as a replacement for "senior" or "elderly," a number of voices began warning that the approaching retirement of Baby Boomers — the first generation of older adults to have embraced physical fitness throughout their lives — would mean a rethinking of the planning and design of senior centers. It wasn't long before fitness centers began to integrate senior-centric components, and vice versa.

Integrating fitness centers successfully within a senior center plan is proving to be the more difficult of the two scenarios, however. Too often, senior centers designed using a community recreation center template aren't quite right for older adults, some of whom are put off or overwhelmed by the experience. A greater understanding of the needs of older adults has to come before conceptual design can begin in earnest.

AGE APPROPRIATE
One of the greatest misunderstandings about senior centers is that they serve one generation. In fact, as currently configured, senior centers target members of the so-called Silent Generation, Depression-era babies who are now between 69 and 89; the remaining members of the Greatest Generation, the youngest of whom are now 90; and increasingly, the Baby Boomers, who are now in the range of 50 to 68 years old.

However, a multigenerational senior center is still different than a multigenerational community recreation center, the primary user groups of which are parents and children. The design implications in recreation centers are by now relatively well-known — families that utilize the center are shown the complete menu of activities upon entering (gymnasium, pool, fitness center, climbing wall), and adjacencies inside the center are driven by the needs of users as well as operators. As an example, both for reasons of safety (parents wanting to keep an eye on their toddlers) and supervision (administrators wanting parents to look after their children), high-use spaces can be brought into closer proximity so that parents working out in the fitness center maintain a view into the childcare room or gym.

In this way, recreation centers can be said to use design to bridge the 20- to 40-year gap between generations. But to be effective in the age of the Baby Boomer, senior centers have to achieve a certain amount of physical separation of the building's social and active spaces — even as they bring 50- to 90-year-old adults together in myriad ways.

There are a number of reasons for this. First, as with the design of hospitals and retirement communities, sensitivity to the physical limitations of some guests is of paramount importance. Older adults with mobility impairments need to be able to find services conveniently located close to the entrance — whereas users of the fitness center, no matter their age, can be assumed to be able to walk farther to reach their destination. 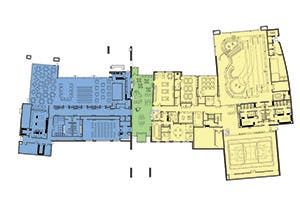 The Summit in Grand Prairie, Tex., was designed with respect for the varying needs of the groups that make up the '50+' age range. - Click to enlarge

Related to this, seniors who have led a less-active lifestyle or are coming to the senior center mostly as a social outlet, need to feel comfortable. While workout clothes worn by older adults tend to be much less revealing than those worn by young exercisers, it's important that social areas — which are typically outfitted with plush, comfortable furniture — are free from members wearing sweaty clothes or dripping bathing suits. Third, sensitivity to the building's variety of uses and the sensory issues of some seniors requires that the noise associated with fitness centers (whirring cardio equipment, clanging weights, music) be kept from encroaching upon social areas — and that, visually, the interior is uncluttered and easy to navigate.

It is also important to achieve a different balance in visually telegraphing the center's offerings to visitors. Unlike a municipal rec center or a for-profit health club, a senior center's social components are at least as critical as its active components, if not more so. All of this makes clarity of plan organization more vital than visual connectedness of spaces. 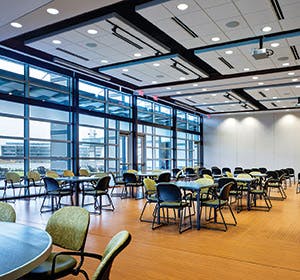 PUTTING THE PLAN IN PLACE
The Grand Prairie (Texas) Parks and Recreation Department markets The Summit as having been designed "specifically for active adults ages 50 and older," but the design is (in keeping with the above) sensitive even to less-active adults. The building's porte cochere entry opens into a large, comfortably appointed central lounge that splits the building on the short axis and offers a view to the outdoor patio and lake beyond. A cafe serves an outdoor grille as well as the lounge, which is upscale but homey, with walls of cut stone, comfortable but firm leather furniture, a fireplace and rich wood-panel detailing. From the lobby, visitors enter the passive activity wing on the left (theater, dining room, banquet/ballrooms) or the active activity wing on the right (game room, fitness center, natatorium, gym, jogging track). 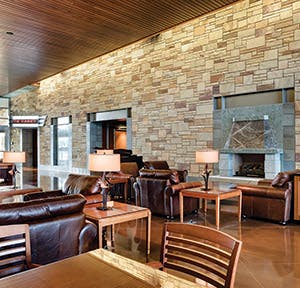 These are elements that, except for glass offering a glimpse into the game room and the theater marquee, are not visible from the lounge. In fact, the separation of social and recreational is already apparent when visitors approach the facility from the parking lot, with the right (active) side of the facade enlivened by glimpses of joggers on the second-level track within the gymnasium that serves as the visual counterweight to the high-volume dining room on the left. While the eye is drawn to the porte cochere and most visitors enter there — the lounge is, after all, the primary space for impromptu gathering — the parking lot curves around to the east and reveals a second entrance directly into the active wing. This entrance is equipped with a card reader, giving facility operators more control over this second access point, and members the option of going straight to their workouts. 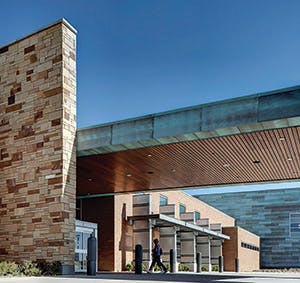 Because of the importance placed on walking by both generations of active adults, the patio outside the lounge links to the boardwalk along the lake. Outdoor activities are surprisingly robust, given the sometimes-scorching Texas summers. Deep shade trellises and shade structures protect the patio and gaming courts, and a greenhouse affords gardeners the opportunity to volunteer their services tending to the many landscaped gardens. One way to gauge the success of the facility is by the amount of volunteerism that takes place at The Summit (one such group, using a golf cart, ferries arriving members from their cars to the door), and the amount of ownership its users have taken of the building and the grounds. 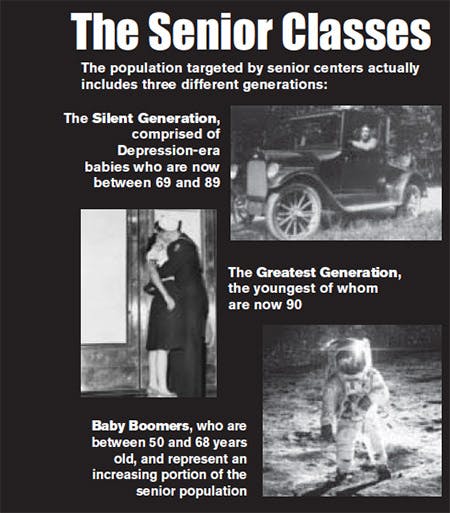 Fantastic Finishes
It is the level of care with which members treat the facility that accounts for another major difference between recreation centers and senior centers — finishes need not be "bulletproof," but can be rather of a higher quality, helping to create the atmosphere of upscale comfort that will attract more community members to the facility. In this way, these rethought active adult centers resemble not so much the senior centers of old, with their sterile, institutional feel, but private-sector resort communities such as Robson or Del Webb — the Grand Prairie planning committee toured examples of each early in the design process. Although The Summit incorporates a particularly high level of finishes, it isn't the scale or budget that makes this active adult center work. The underlying design principles would be the same, whatever the budget.

If you were to draw The Summit as a Venn diagram, you might see a blue circle and yellow circle, with green designating the central lounge where the two typologies merge. That green space has fostered what staff members have come to see as mentorship relationships between traditional seniors and Boomer seniors, who without this facility might never have met, let alone become connected. There is every reason to think that relationships between Boomers and Xers will follow, given the facilities designed to help foment such relationships.

Stephen Springs, AIA (ssprings@brinkleysargent.com) is a principal with Brinkley Sargent Architects in Dallas. This article originally appeared in the January/February 2015 issue of Athletic Business with the title "Mind Your Elders."