HEAVY-BREATHING ROOM The popularity of cardio exercise leads to views like this one at the University of Iowa’s Campus Recreation and Wellness Center. (Photo by Kun Zhang, Dimension Images, courtesy of RDG)

The years that separate a building's initial planning and its completion make it imperative that owners and architects are accurately able to forecast future needs. Fortunately, the pace of change isn't so rapid that they must dabble in science fiction — after all, basketball is alive and well almost 125 years after James Naismith invented it. But one needn't travel too far beyond the court to find a cautionary tale; racquetball, invented 65 years ago by Joseph Sobek, has over the past 30 years declined significantly in popularity, resulting in a reclamation and adaptation of courts since the activity's late-'80s peak.

As architects who have regularly surveyed operators and users of recreation facilities, we at RDG Planning & Design often have been in a position to make well-informed predictions — let's call them educated guesses — about the future of recreation facilities. As with evidence-based design, which has gained a strong foothold in healthcare, benefits accrue to an even greater extent to recreation providers contemplating changes to their built environment.

While our methods are not like double-blind procedures of the type conducted by medical researchers, we reach consistent numbers of respondents and receive solid comparative data, allowing cross-comparisons between surveys and revealing the ebbs and flows in the marketplace over time. Even if this data can't help us predict a coming era of cloaking devices and zero-gravity group-exercise classes, it has resulted in important and successful predictions — and it isn't lost on us that our last survey reported in Athletic Business, just 15 years ago, utilized such un-futuristic tools as pens, paper and postage-paid envelopes. Things do change, and we need this data to help forecast it. 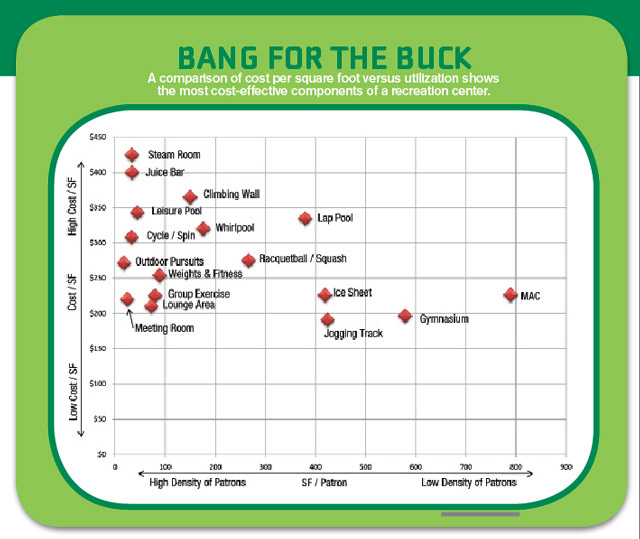 CURRENT TRENDS
Facility owners keep close tabs on user demand because they want to create programming to meet it. Architects approach things the same way, with care taken to meet present demand while anticipating future demand. Although this might be read as an attempt to absolve the architectural community after years of under-delivering on fitness space, the fact is that facility owners have to consider all members of the community, as well as their budget, when determining a building's program. If anything, it is a testament to the broader architectural community's work during the past two decades that recreation centers regularly produce better-than-expected numbers of annual memberships and daily visitors, stretching available fitness space to the limit.

For years, designers have estimated initial space allocations based on metrics per participant. In 1999, the number was around 1 square foot per student, while today the number is frequently 1.5 to 2 square feet. In the recent recessionary (and current post-recessionary) climate, a better calculation is often to evaluate the cost per patron for each of the spaces under consideration, by dividing the cost of construction (and/or operation) of each space by the number of participants who utilize that space over the term of one year. Building components in the lower left quadrant of the resulting matrix, those deemed "low cost, high occupancy" such as group exercise studios, are the most cost-effective to build, whereas "high cost, low occupancy" spaces such as lap pools can be the least. (see chart on p. 56)

These sorts of metrics — when paired with survey results of users, likely users and program operators — can go a long way to ensure that the resulting recreation center maintains a robust usage well after the initial excitement over the facility has worn off. It certainly helps that owners' interest in keeping construction and operation costs low seem to be dovetailing with users' interest in individual pursuits such as fitness over the more traditional team sports.

This is probably the most interesting change we've seen when comparing data from 15 years ago to now — this coalescence around an idea of an individual mentality (as opposed to group) in the recreation sphere. There is still demand for expensive cardio equipment, of course, not to mention pools, MACs and other specialized spaces or equipment. But repeatedly over the past decade, we've seen a remarkable resurgence in more-Spartan activities. A good example nowadays is the growing popularity of bouldering, while top-rope climbing may have reached a plateau, as it were. In the collegiate market, bouldering makes a lot of sense: It is less expensive to build and it requires less oversight. It can also be built of modular units that can be more easily removed later, meaning that it can be operated in space that, if not truly multipurpose, at least doesn't forever have to be dedicated to climbing.

In fitness, the rise of functional training has been one of the biggest surprises of the past 20 years, and it has only accelerated as a trend with the emergence of suspension training, CrossFit and other similar programs. As designers, we can tell you that the reappearance of monkey bars has been something we would not have anticipated 20, or even 10 years ago. Had we 10 years ago proposed monkey bars for a college rec center, it would have met with extreme skepticism.

DEMAND FOR FLEXIBILITY
Another big driver of change in the rec center environment is the administrative demand for flexibility. If the recession ends up cutting into proposed rec centers' square footage, what ends up making the cut has to be able to serve many masters.

This demand for flexibility is one of the strongest trends in rec center design right now, and it sits at a juncture between specific programming needs and high stewardship. If a space is singularly focused, it frequently serves a relatively small number of participants. If, however, it can change from a group exercise space to, say, a meeting space and then a demonstration kitchen in just a few minutes, then it becomes a space that's much easier for the institution to endorse. This is a real conundrum in certain instances, as some roommates fit well together, while others never will. Facility operators who try to host yoga, Pilates and cycling in the same physical space can spend so much time "turning a room" that these multifunction spaces often fail to meet the high expectations of participants.

Making spaces multifunctional can be difficult and expensive, but still, we're seeing this happen in some surprising places. For example, we are seeing pools designed to be rapidly heated or cooled so that in the range of a few hours an operator can accommodate warm-water aerobics following competitive swimming, which requires cooler water. Operationally, this is energy-intensive, but as a trade-off against building a second pool basin, it can be financially reasonable.

Clearly, the idea of multipurposeness is changing. Whereas 15 years ago, multipurpose space would be called on to serve group cycling, indoor golf practice with nets, and combative exercise, today there's a growing desire for specialized spaces for each of those activities, where possible. Accommodating such desire requires investment in your facilities by boosting the technological capabilities of a multipurpose space to change, and change quickly, as well as increasing your dedicated storage space. What makes that possible is a strong business plan.

In another recent trend, many institutions are seeing the outdoors as a place to grow their indoor programs — and vice versa. The University of Nebraska-Lincoln's new Outdoor Adventure Center thus has both indoor and outdoor climbing. Other schools, meanwhile, are creating something akin to "recreation without walls" — forthcoming projects of ours include a CrossFit studio in captured outdoor space (the University of Oregon) and a rooftop patio for group exercise classes (the University of North Carolina-Greensboro). Because of the lower price point of building things outdoors, as well as the dynamic quality of such spaces, more schools are sure to follow.

WHAT'S NEXT
The survey data does have its holographic moments. The technological capabilities of rec centers continue to grow, as does the individualization of the fitness experience, helped along by smartphone-based workout applications. Survey respondents say that 40 percent of rec center users are now using tools to track their progress, and four of five users (and nine of 10 facility operators) attest to these tools' accuracy and their ability to lead to real fitness improvements.

Tracking our progress is just the start. When we presented our survey results at the 2014 Athletic Business Conference & Expo, we met many recreation professionals who shared with us some incredible ideas about what they think could happen in coming years. Mike Warren, senior associate director of recreation at the University of Wisconsin, foresees a future in which workouts are monitored and shared with health insurance companies, with individuals' overall fitness affecting their insurance rates. In an age when corporate wellness programs are already built on this idea (employees' insurance rates are determined in part by their program participation), it is wholly believable that such programs may extend into your recreation activities in the not too distant future.

Major changes are and will continue to be in the area of sustainability, wellbeing, healthy building environments and smarter building materials — including floors that capture energy from the feet of 5,000 people who visit your facility daily, and sports surfaces that utilize fiberoptics and LEDs to change the field of play at the flip of a switch. Depending on how far out on the limb you want to climb, you might also imagine a coming era of holographic fitness instructors. Given that a basic activity tracker would have been dismissed as science fiction in 1995, this is not as far-out an idea as you might think. 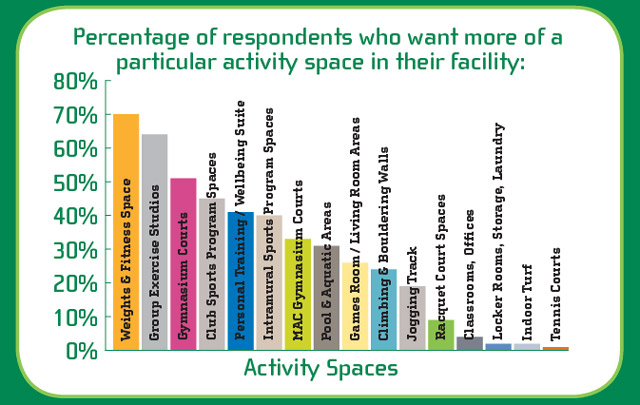 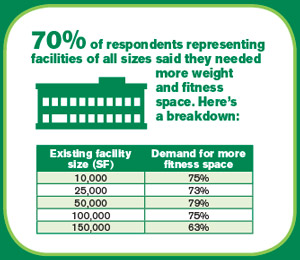 It does not matter in what year we ask the question: Everybody has fitness space, everybody loves it — and everybody wants more. In 1999, we'd noted a rise in the average amount of fitness space of between 10 and 20 percent in just five years, and we have found continuous growth since, to the point at which we might have expected some level of satisfaction in the space devoted to fitness.

A surprisingly high share (51 percent) of respondents named gymnasiums as an activity space they needed more of, while 33 percent said the same of multipurpose athletic courts. These are typically spaces that rise and fall in opposition, with increasing demand for one (usually MACs) offsetting a decline in the popularity of the other, but these figures show that the staying power of volleyball and basketball remain undiminished in the collegiate recreation setting.

At the other end of the spectrum, this survey was consistent with our past findings — 43 percent of respondents tabbed racquet courts as the least important activity area in their facilities. Anecdotally, at least, squash has risen in popularity on campuses in many regions of the country, but space dedicated to racquetball remains problematic.

The need for more fitness space and the surplus of courts has fueled court conversions for years, and this will continue. If you cannot remove underutilized courts, group exercise, table tennis and climbing walls remain a popular choice for these converted spaces. Some operators have needed to force individual cardio equipment into these courts, simply due to the high demand for cardiovascular exercise.

Bottom line, the popularity of cardio exercise simply dwarfed all other forms of fitness in the survey data. Asked to rank the order of importance of various spaces based upon user demand, cardio equipment beat free-weight equipment by more than a full point, with core strength equipment yards behind.

Jack D. Patton is a principal and Michael Andresen is a sustainable designer with RDG Planning & Design in Des Moines, Iowa. This article originally appeared in the April 2015 issue of Athletic Business with the title "Recreation State"