Keeping Pests Away from Athletic Fields

When dozens of geese land on your fields, leave droppings and impede athletic activity, who do you call? If you're Joseph C. Scarpelli, mayor of Brick, N.J., you might just call the Geese Police of nearby Howell. The company has an ongoing contract in Brick to chase multitudes of geese away with Border collies.

Up the coast, the Boston College athletic department keeps two English setters to drive geese from the college's football practice field, and other facility managers are doing the same. Sports turf managers are increasingly seeking creative solutions to pest problems. The potential safety and political implications of these, however, can pose just as much of a hazard as the pests themselves.

One of the biggest safety concerns can come from the tiny insects that plague fields in the summer months. Insects such as white grubs and mole crickets gnaw away at root systems, loosening the turf and endangering players on the fields. "All the lower roots are basically cut off, so athletes could run through that area trying to get traction and lose their footing, especially while being hit," says Bob Milano, stadium and sports turf manager at the University of California- Berkeley.

Some insects also tunnel through root systems, exposing roots to air and allowing them to dry out. Worse yet, the damage they cause can sometimes be irreversible if the grass has passed the stage where it can rejuvenate itself. "The grass can't grow and multiply because it's missing part of its root system and can't take in nutrients," says Tom Curran, ground maintenance supervisor for the Pompano Beach (Fla.) Department of Public Works. "The players will wear out an area faster because the recuperative power of the turf is not there."

While insects are problematic nationwide, the specifics vary by region. In the south, mole crickets, which favor sandier fields, are a nearly constant battle when they're active. In other areas, white grubs are the primary concern. Beginning in early July, they will arrive to feast on delicacies - especially northern turf grasses like Kentucky bluegrass or perennial rye. Even at facilities where pesticides are in use, white grubs can destroy 8 to 10 percent of fields in an average year. To try to decrease that number and assuage environmental and safety concerns about pesticides, many sports turf managers are moving away from traditional pesticides and opting for alternatives.

"We have gone from using contacttype insecticides, which are more acutely toxic, to a nontoxic type that kind of interrupts the metabolism of the insect," says Dale Getz, athletic facilities manager at the University of Notre Dame. "It's much, much safer for any good insects that are out there. It works by affecting a hormone that is not in humans or most other insects."

Those using traditional insecticides are cautious with their applications. Most will keep a facility closed a couple of hours longer than the label recommends, just to be safe, and some will even shut down fields for a full day. Generally, the application does not interfere with scheduling, since the problem often occurs during the off-season. If not, spraying can be done on off days or very early in the day, long before any practices or games are scheduled to start.

Curran says he occasionally takes advantage of the nocturnal habits of mole crickets by spraying at night, turning on the stadium lights to draw the bugs to the surface or venturing out under a full moon.

"We try to be as safe as possible," Curran says. "We'll lock the fields up, and we'll post that they've been sprayed. We try to look at the safest product out there, but sometimes you've just got to nuke them. We've used pesticides that require the guys to put on protective suits, and then we have to make sure there's somebody standing on the field all day long to keep people out."

Fortunately, many of the chemicals used today are broken down into harmless substances fairly quickly, either by soil, sunlight or microbial action, so players are less exposed to harmful pesticides. However, many managers don't want to take a chance, and are choosing cures over prevention.

"I don't like to treat anything as preventive maintenance," says Curran. "I like to see something occurring before I spray or put any chemicals out. If there's nothing there to kill, you're just making everybody more susceptible to being around pesticides."

Milano agrees. Even in a college setting, heavy prevention doesn't pay. "Only if the grub population gets really bad, where we're having a lot of damage to the turf or potential for an athlete to be injured, do we apply an insecticide," Milano says. "If the numbers are relatively low, we'll live with a little bit of damage and not apply a pesticide."

The risk, of course, is that insects draw other wildlife, which may present additional safety as well as political implications. While birds, especially geese, will generally be attracted to areas near water, they also can be drawn to a location by the promise of food, and sometimes may even make a home in a stadium or nearby building.

"Birds are easily the first sign that you could have a grub problem," says Milano. "Usually if you have a lot of bird or animal activity, that's a good sign that you probably have something going on that you need to keep an eye on. The animals know better than we do."

For the past few years, the animals have apparently known there was a free buffet at UC-Berkeley. Milano reports quite a bit of animal damage - from raccoons, skunks and opossums - and says the college has trapped four skunks and three raccoons just in the past three months. But UC-Berkeley is not the only facility running an animal house. "Once the insects hatch and get big enough for birds to want to eat them, birds, raccoons, skunks and everything else will try to dig them out of the ground," says Getz. "They will tear up chunks of sod as wide as a fairway if you let them."

These tears irrevocably damage a field, and are potential safety hazards for athletes. But removing the perpetrators may not be as easy as it seems. Birds, for example, can be chased away using dogs, but then someone must be responsible for maintaining the dogs, and the facility must be prepared to deal with the birds' inevitable return.

Then, of course, there's the issue of protected species. Burrowing owls in Florida, Curran will tell you, are no laughing matter. A major airport project in his area was held up when seven burrowing owls' nests were found on the runway expansion. When an owl built a nest in a local park, orange safety fencing and signage had to be installed around the nest until the owl had moved on.

"If they're from a particular area, they return to that area," Curran says. "If they burrow on a field, you have to shut the field down until they finish nesting and the babies are gone, and then you have to get a permit to destroy the nest. Then you have to flush water and sand into the burrow to fill the holes up. The work is very extensive. If you don't do it, they'll come right back to the same nest."

Even animals that aren't protected can create some sticky situations. Milano sets traps around his fields to capture pesky animals, then releases the animals in the hills above campus. If the problem gets to the point of damaging fields, costing a great deal of money or potentially risking injury to players, however, Milano admits to euthanizing the animals.

It is an option not often available to managers of more highly visible public facilities or fields. Tim Moore, sports turf manager for the Montgomery County (Md.) Department of Parks, has had continual problems with birds and animals on his fields, but is hamstrung by the risk of inciting political activists right outside the nation's capital.

"It's a public relations problem," Moore says. "It's just a public perception that we're trying to harm an innocent animal or bird. We have botanical gardens in our park system, and we have a lot of animal activists come out who are keeping us from destroying some of the deer that are destroying our parks. I know that I would have the same problem getting rid of geese."

Since several of the fields in Montgomery County are right near stormwater management areas, geese have been a terrible problem, leaving waste the size of poodle droppings, Moore says. Every time he seeds, a third of the seed is spirited away by the birds. While deer primarily feast on treats in the botanical garden, they have caused thousands and thousands of dollars worth of damage to the park system.

It's a lose-lose situation, Moore says. The public would probably accept use of a nontoxic product to drive animals away, but it would undoubtedly involve money. He's considered using dogs, but technically, dogs are not allowed in the park, and someone would have to be available to care for the dogs. Moreover, they'd have to be at work on the fields 24 hours a day to keep birds from returning, he says.

"You can bring a dog in for an hour a day, but the other 23 hours of the day, the geese are still going to be there," Moore says. "Some of them are just very, very brash. I've had several problems with them perching on one of the pitcher's mounds. You can walk right up to them and throw a pitch and they won't move."

The key is to catch problems early, to kill white grubs, mole crickets and other insects at the first hatching, before birds and animals have a chance to sense their presence and invade the fields. Even better, some say, is to keep your field healthy in the first place. As Getz says, "A healthy grass plant, just like a healthy human being, can withstand some disease and insect pressures on its own." 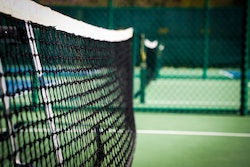