If you're a facility operator, a sentence that includes "swimming pool" and "peat bog" is ordinarily reason to panic. 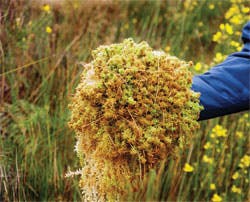 The species of sphagnum moss that acts as a sustainable alternative to pool and spa chemicals can be found in its natural state in New Zealand. (Photo By Vance Fiegel, Courtesy of Creative Water Solutions)

If you're a facility operator, a sentence that includes "swimming pool" and "peat bog" is ordinarily reason to panic. But an increasing number of people, searching for green products and, perhaps, products that mitigate problems associated with excess chlorine and bromine in the pool environment, are turning to a natural sanitizer that emanates from the bogs of New Zealand and other remote locales.

The product is PoolNaturallyÂ® (and SpaNaturallyÂ®), the company that makes it is Plymouth, Minn.-based Creative Water Solutions, and the key ingredient is sphagnum moss, a soft, leafy plant found in the higher latitudes of both the northern and southern hemispheres. Or, rather, the only ingredient, according to David Knighton, the Minnesota surgeon and inventor behind its introduction to the pool industry.

"It's like a tea bag," Knighton says in disarming fashion. "The moss is harvested by hand and dried, the leaves are removed from the stems and roots and sterilized, and it's placed in fine-mesh bags of different sizes for different applications. That's essentially it."

There is, however, a lot more to the story. The product's genesis was a research trip Knighton took to northern Minnesota's Boundary Waters and a basement spa at home that resisted all efforts to balance its contents with conventional chemical weapons. Noting the clarity of water up north and understanding the science of bogs, he brought some plants home and, over four days, achieved water balance - and a light green, boggy spa.

Further research - extensive research, given the hundreds of species of sphagnum moss and the tens of thousands of possible habitats within the narrow band of moist alpine tundra where it thrives - took Knighton to New Zealand, and a variety that traps bacteria and heavy metals without altering the water's hue or odor. After that, it was a matter of ensuring that the moss used was more than 95 percent pure (meaning, of the right genus), and that the right dose was found for various pool applications.

PoolMoss (as it was initially marketed) was sold in the residential market beginning in 2007, but gained a much higher profile in 2009, when it was tested at two public facilities in St. Paul, Highland Park Aquatic Center and the Great River Water Park. The city's parks and recreation department reported that the need for daily pool cleaning was eliminated, use of chemicals decreased, water consumption was reduced (because of less need for backwashing) and pool customers - who weren't told what, if anything, was being done differently - voiced tremendous satisfaction with evident reductions in terms of odor and effect on skin, eyes, lungs and swimsuits. Further testing in 2010 confirmed these results, as the number of PoolNaturally buyers increased, mainly through word of mouth.

"As a result of the St. Paul test, Macalester College tried it and loved it, and all the members of swim teams that came through there loved it, so now we've got Gustavus Adolphus and other local colleges," Knighton says. "We have over 150 commercial pools now, and we're really growing quickly in the collegiate market." Creative Water Solutions this spring was a grant recipient through the University of Maryland's University Sustainability Fund, which is supported by the institution's Student Sustainability Fee. And CWS will soon officially announce a major coup in the club realm - a contract to outfit Life Time Fitness, the Chanhassen, Minn., chain that has 435 outdoor and indoor pools, with tea bags of sphagnum moss.

Knighton reports that interest is also growing among pool chemical manufacturers, such as Victoriaville, Quebec's Sani-Marc Inc., to which CWS has sold Canadian distribution rights. Their grumbling is loud - none can be happy about a product that cuts chemical use - but Knighton says an increasing number see the writing on the wall. "They see the green revolution coming, and the ones who are paying attention want to be on the front of the wave, not behind it," he says.

Skepticism remains common, at least among people unfamiliar with the concept. In Knighton's experience with other industries, it takes about five years to overcome, which could make 2011 the turning point for his young company. "People are starting to believe," he says. "Everybody's looking for a green product, and I think this is one of the truly green products out there. Not only is it a plant, but the way it's harvested, it grows back naturally; you don't have to reseed or anything. Apart from sterilizing the leaves, we don't do any secondary thing to the plant at all. It's just the way Mother Nature does it."