When the downtown location of the YMCA of Greater Birmingham, Ala., opened in 1984, it included a nondenominational chapel that remained a core element of the facility until 2008. 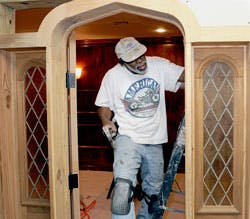 The Rev. James Johnson constructs the doorway to the new chapel at the Downtown YMCA in Birmingham, Ala., which opened in June. (Photo Courtesy of The Birmingham News/Mark Almond)

When the downtown location of the YMCA of Greater Birmingham, Ala., opened in 1984, it included a nondenominational chapel that remained a core element of the facility until 2008. But, as with many YMCA chapels over the years, it was dismantled to make space for other programming areas - in this case, a group cycling room.

Three years later, that facility's chapel has been resurrected in another part of the building, pleasing members initially irked by its disappearance from an institution that pledges to build healthy minds, bodies and spirits. "Many members wanted it back," says Birmingham YMCA chaplain Tom Rains. "The chapel is a gift from several of our branch board members and is used primarily as a place for Bible study, spiritual meetings and quiet time. There is no set programming, and worship services are not conducted there."

But the fact that it's there at all is evidence of the branch's dedication to a long-held YMCA tradition. Early Ys offered Bible studies and evangelistic outreach before they became known primarily for promoting physical fitness and recreation, and recent efforts by some YMCAs have sought to re-emphasize the religious component in the name "Young Men's Christian Association."

"It is important that the 'C' in 'YMCA' be prominent in our facilities," says Kevin Myers, director of operations for the David D. Hunting YMCA, one of five facilities (all with chapels) that make up the YMCA of Greater Grand Rapids, Mich. "We want to make sure people have a place to come and reflect."

Dedicated worship spaces like those in the Downtown Birmingham and Greater Grand Rapids Ys are one way to do that. Other Ys host services for local Churches in their gymnasiums and community centers on Sunday mornings (before the buildings open to the public) and then often allow attendees to participate in supervised workouts. And nontraditional Ys, such as Colorado's YMCA of the Rockies and the Frost Valley YMCA in the Catskill Mountains of Claryville, N.Y., offer beautiful and serene indoor and outdoor chapels - adding wedding services to their slates of residential camping, environmental education, family vacations and conference programming.

Myers says he can't estimate how many YMCAs have chapels. "But," he adds, "YMCAs really are a reflection of their communities, so when facilities are designed, the needs of the community are considered. We definitely made sure the chapel was a strong part of our facilities, since there is a large faith-based community in the west Michigan area."

Even officials at the YMCA of the USA can't say definitively how many of the organization's facilities have incorporated worship spaces into their environments. "While our associations are united by a common cause, they all operate independently and autonomously," says national Y spokesperson Mamie Moore. "Providing a dedicated worship space or negotiating a rental agreement with a church are choices a local Y makes. Y-USA does not track that kind of data."

But this much is clear: YMCA chapels, which seldom hold more than a few dozen people and are often located near gymnasiums, natatoriums or childcare rooms, provide welcome places of peace in buildings otherwise alive with activity. 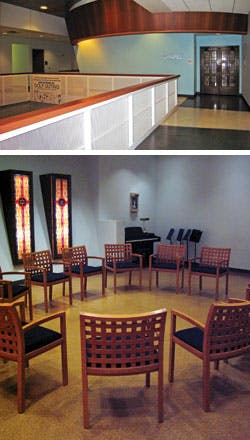 The curved second-floor chapel at the David D. Hunting YMCA boldly greets members and visitors with rich wood and glass salvaged from a former chapel in a now-demolished, century-old YMCA. The space opened at the same time (2005) as the four-story, 160,000-square-foot facility - the largest jewel in the YMCA of Greater Grand Rapids crown - and measures approximately 20 by 30 feet, with an estimated capacity of 30.

The nondenominational chapel is home to programmed activities five days a week, according to Chelie Simmons, member engagement director for the David D. Hunting Y, including men's and women's Bible study groups and a staff-hosted Monday-morning prayer service that is open to the public. Individuals also stop by for personal reflection and to write in a book of prayer intentions. "We have many members who just go in there for comfort," Simmons says.

While all five Grand Rapids facilities (including the Spartan Stores YMCA, which opened last month) boast chapels, the downtown Y is the only one of 13 Birmingham YMCA locations to provide a dedicated chapel - largely due to space constraints, according to Rains. But that doesn't mean there's a spiritual disconnect at those other facilities. "Our Birmingham YMCA is really moving toward a more ecumenical tone in our relationships with other religions in the area," says Rains, a retired Presbyterian minister and former businessman who has been the Y's chaplain since 2004. "We have a large Jewish contingent in our membership and often highlight interfaith awareness on major religious holidays for Christian, Jewish and Muslim faiths."

Children who are Y members learn about those faiths at summer camps and in after-school programs, Rains adds. Ramadan was covered in August, and one group even attended iftar (an evening meal during Ramadan) at one of Birmingham's local mosques. Additionally, the Downtown Y hosted a large contingent of children from the Islamic Academy of Alabama at a summer camp and oversaw an interfaith discussion.

Do those kinds of activities risk alienating YMCA members who simply enjoy a particular facility's fitness and recreational amenities? "I've had a few conversations with people wondering if certain beliefs were pushed here at the YMCA, and they are not in any way," Myers says. "We are a facility for youth development, social responsibility and healthy living, and whatever that means to you specifically is how you'll get your experience from the YMCA. We show off the chapels as an option for our members, but we don't make people focus on them. They are there for our members, if they want them."

One of the keys to making YMCA chapels desirable to the people who want them is creating the proper atmosphere in a comforting space that bridges the gap between active and reflective. When the YMCA of Greater Houston made a commitment to both renovate existing facilities and build new ones, all with prominent new chapels, Kirksey Architecture was hired to oversee the transition. 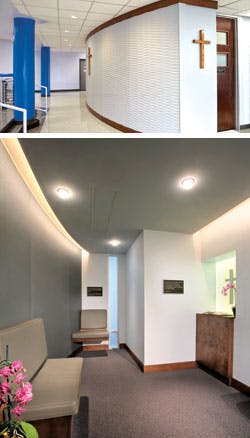 "YMCA chapels have made a comeback of sorts, at least in the Houston area," says Steve Durham, Kirksey's executive vice president and team leader for community projects. "It was good to hear that these YMCAs were going to have chapels as part of their programs, because they make so much sense in a facility like that. We wanted to make them special, contemplative places and allocated a lot of design time to them. We were also economical in other areas, so we could spend more on the chapels to create warm and inviting spaces."

One of the signature chapels Kirksey helped design, the Space Shuttle Columbia Memorial Chapel, is located in the Edgar A. Smith Family YMCA and honors the seven astronauts of Columbia - destroyed in February 2003 while re-entering the atmosphere after a 16-day mission - who also were active at that particular YMCA branch. The chapel, located off an extra-wide corridor near the facility's entrance, is fluidly designed with benches that fold out to double as tables, along with a small altar that is backlit to provide ambient light in the 20-by-9-foot space. "The challenge with the chapel being inserted into these loud and fun atmospheres was trying to create conditions inside the chapel that were quiet," Durham says. "The materials we used were more serene than you'll find in workout areas."

Creative stonework adds warmth to the chapel spaces, but stained glass was intentionally overlooked to break away from the appearance of previous Houston Y chapels, which prior to the renovation and new construction had been converted into other spaces over the years. Muted, earthy colors and decorative wall fabrics provide proper mood-setting, while soundproof walls and vestibules catch and block outside noise, as do doors with special seals on the bottom. The exteriors of the chapels are designed to blend in with other internal surroundings. Noticeably absent outside the chapel is religious symbolism of any sort - not even a simple cross, unless a member subsequently donates one, as was the case at the Edgar A. Smith Family YMCA. "There's a reason we didn't design something blunt and obvious, with a big cross in front," Durham says. "The YMCA wants to be inclusive."

That's a refrain echoed by the Birmingham Y's Rains. "We have members of all faiths visiting the Y," he says. "There is so much stress among religions today, but this is a place where differences are set aside and we are committed to making everyone feel welcome and accepted, regardless of their faith or spiritual foundations."