Whether you run a health club, a recreation center or a martial arts studio, you do what you do well and with an entrepreneurial esprit unrivaled in most other professions. 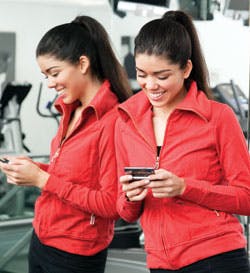 The ability to touch members via their mobile devices has become a popular facility software function. (Image Â© Punchstock)

Whether you run a health club, a recreation center or a martial arts studio, you do what you do well and with an entrepreneurial esprit unrivaled in most other professions. Still, no one has yet to consider you the second coming of Steve Jobs. And that's okay.

There are currently dozens of companies offering software products and services designed specifically to keep your business humming along - from billing and collections to the scheduling of personal training sessions - allowing you to focus on the high-touch, interpersonal aspects of the job that may well have drawn you to the industry in the first place.

Your long-term survival may depend on it.

"In general, the wellness industry has been a failure for the most part," says Al Noshirvani, founder and CEO of club software provider Motionsoft. "Any business that's got attrition rates that approach 50 percent annually is doing something wrong. But you can use technology in a creative manner to better understand your members' behaviors and be better able to get, keep and know your members."

While member relationship management is a top priority, the tracking of a facility's individual revenue streams - often established to counteract the financial impact of attrition - is a close second. Sean Kirby, national sales director for software provider ASF International, likens today's health and fitness business model to that of the airline industry, in which just about every aspect of the experience has become a profit center. "It used to be you bought a club membership and it included everything. Well, now it doesn't," he says. "There are annual enhancement fees, there are personal training fees, and there are different levels of service for towels, lockers and childcare. Now, people are really paying attention and managing the attrition, but also introducing new ways to collect higher revenues from members."

Facility management software delivery takes three basic forms: client-based, in which the software is installed and the data is stored locally in a secure, reliable manner; web-based, in which data is accessible online, allowing for remote control and quick updating; and a hybrid of the two, in which a client application is hosted on the software provider's server and accessible through a secure URL.

In particular, web-based applications, with their ease of both deployment (a client can be up and running in a day or two) and support, have grown in popularity over the past five years.

According to Kyle Zagrodsky, who developed a software solution for the nine Curves fitness centers he owned in the late 1990s when he couldn't find a low-cost boutique option on the market, ease of use is a key consideration among software shoppers. "They want a turnkey, ready-to-go solution that doesn't require a lot of thought on their end," says Zagrodzky, whose iGo Figure software is about to launch a web-based version. "But it's got to be full-featured, as well."

Software companies will provide a laundry list of facility management tasks their products can handle, allowing users to pick features a la carte and establish security parameters that grant, say, juice bar staff access to that specific point-of-sale data and nothing else. Other software providers specialize in one aspect of the business - member retention, for example - and their product may merely complement a completely separate software package. That said, much of what's out there may well exceed an end-user's perceived needs. "Most clubs use only a fraction of what is available to them, but that's not a software issue, per se - it's a process and management issue," says Barry Klein, co-owner of Elevations Health Club in Scotrun, Pa., and a regular AB contributor. "For example, all club management software programs allow you to capture members' e-mail addresses, and then it's very easy - or should be - to generate an e-mail list that you could use to send e-mail blasts to members or prospects. But if you don't capture the e-mail addresses, it's of no use to you. Even worse, if you don't know why you should be doing e-mail marketing, then no club management tool can help you." As another example, Elevations eschews the photo-taking feature afforded by its chosen software (ABC Financial). Same goes for the unattended check-in feature favored by 24-hour clubs. "Not taking advantage of everything isn't necessarily a big deal," Klein says, "but lots of clubs don't even know what they're missing."

Noshirvani, for one, believes health and fitness software, which for the most part didn't even exist until the mid-'90s, should do more than handle billing. It should help facility operators manage their relationships with members both past and present. Clubs aren't doing enough to reach out to the former group, Noshirvani says, adding that these are people who decided at least once before to use the facility and that it's a "very simple process by which they can go to the website through an e-mail link and sign up online" to use the facility again. Meanwhile, keeping current members in that category involves algorithms unique to a given facility that are based on several attrition indicators - from a member's check-in frequency to his or her history of purchasing non-dues services, and on down to facility proximity in relation to the member's residence or workplace. Based on this data, the software flags the member as likely to quit, as Noshirvani puts it, "not next month, but three or four months from now."

In that amount of time, the facility can proactively engage the member to take advantage of special incentives. Says Noshirvani, "Giving away a $20 half-hour personal training session in an effort to either keep the member engaged and paying you their membership fees or, from an up-sell perspective, get them to buy a 20-pack of personal training is well worth the expense."

What's next? According to Adam Zeitsiff, CEO of EZFacility Inc., a software provider serving fitness, sports and leisure facilities, the industry at large is heading toward greater social media integration, "so that when you are showing up for your soccer game, you can click a button online that will add it to your Facebook page and people will know where you are."

More than that, this type of social media networking will ultimately grow participation numbers, which is the core mission of software provider Active Network. Says James Reyes, general manager of Active Network-Communities, which boasts clients ranging from small-town recreation departments with one facility to cities the size of Phoenix, which has more than 200 rec centers, "It allows parents to share within their social network what's going on - what they're participating in and what their children are participating in. There's a technology piece that helps manage your day-to-day operations, but we believe increasing participation in your community is just as important."

For profit-driven clubs, social media connections can be even more to the point. Gym check-in information automatically posted to a member's Facebook page or Twitter account can be embedded with a link to a "join now" page, and if a Facebook friend completes the sign-up process, the referring member gets credit. "Gyms have for years been doing member-referral programs," says Motionsoft's Noshirvani. "They have not really understood the impact that social marketing can have."

Moreover, the Grouponâ ¢ and LivingSocial models can be applied to club operations, Noshirvani adds, allowing clubs to reach out to their members in real time with court rental discounts during sluggish midday hours, for example. "This is great for tennis clubs, but it's even better for spas that have hourly employees waiting around for sessions to be filled," he says. "You certainly could touch members when they're not in the facility and induce them to come in. Being able to influence your members using technology outside of those four walls is critical."

Conversely, technology can allow the customer to influence the business. Zagrodsky envisions one day offering iGo Fitness clients the option of surveying their members through their handheld mobile device. One simple question - "Would you recommend this club to another person?" - asked of enough members the moment they exit the facility via text message or phone app (with numerically scaled responses producing an average score) is all that's needed to determine if the business is going to grow, plateau or decline over the next 12 months, he says. From there, the facility manager can identify particularly harsh graders and drill down deeper in terms of club strengths and weaknesses. "Keeping in contact and saying 'happy birthday' and reminding them to drink water after they work out - all that stuff matters," Zagrodsky says. "But asking that one question gives you the most immediate indicator of where your club is standing with your members, and I think real-time surveying of that style is something that the industry is going to move toward. You have to be able to determine what your customers think about you when you're on their mind."

Software may at first seem like a peripheral fit for the hands-on athletic, fitness and recreation industries, but to view it only as an impersonal back-room business solution is to miss the big picture. "Look at the face time that we have available now on our iPhones," Kirby says. "That could be huge in communicating with our members and putting a name with a face - a more personal touch that we can add to the relationship with our members through the use of software. What people have to remember is that the technology is a tool to enhance that relationship."

"The people who run these facilities want something that will let them run their business - the rentals, member retention, point of sale, online registration - but also be easy to use, so they don't have to be software experts," Zeitsiff says. "They can still be domain experts in their gym, their health club, their athlete training center. That's what they're good at."