Once limited to a few short months of swimming during the summer, patrons of the aquatic facility at the Royal Glenora Club in Edmonton, Alb., now comfortably enjoy the water - and the surrounding landscape - year-round. 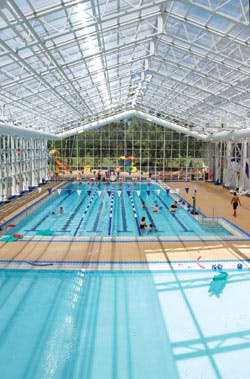 Once limited to a few short months of swimming during the summer, patrons of the aquatic facility at the Royal Glenora Club in Edmonton, Alb., now comfortably enjoy the water - and the surrounding landscape - year-round. In the summer of 2010, Royal Glenora finished construction of a new aquatic facility to replace its outdoor pool. The new enclosed facility, which includes a lap pool and leisure pool, features a Retractable Roof and one wall of glass doors. "It's fantastic," says Kris Munro, aquatics supervisor at Royal Glenora. "I was concerned my first winter here about the possibility of condensation; however, the HVAC system is absolutely fantastic."

Prefabricated enclosures open up opportunities for outdoor pools to be used in a wider range of climates, from the extreme heat of a California summer to the extreme cold of a Canadian winter, while still preserving the feeling of an open environment through the use of operable components. The added versatility does not come without issues, however. Enclosing the environment also means controlling it, providing proper ventilation and maintaining appropriate temperature and humidity levels, things previously left up to nature.

"A cost/benefit analysis needs to be done," says Scot Hunsaker, president of St. Louis-based aquatics consultancy Counsilman-Hunsaker. "There are issues here that relate to heat gain coming in through the glass - circulation, evaporation, air movement."

The enclosure itself changes the environment of the pool, trapping humidity and chloramines, while glass paneling could conceivably create a greenhouse effect. Such a harsh environment is the reason all indoor pools rely on HVAC systems to carefully control temperature and humidity. "A natatorium is a very aggressive environment," says Hunsaker. "It's a very humid space. It also has some of the qualities of pool water chemistry because of the off-gassing. That condensation can be very aggressive. It can do damage to the building and eat away at it."

With that in mind, most pool enclosures are made from corrosion-resistant aluminum frames. The panels that comprise the walls and roof, generally glass or polycarbonate, are insulated to control the temperature variation within the enclosure and minimize condensation. While the glass panels can contribute to the buildup of heat, glazed and insulated panels can also mitigate the effects of the sun, keeping both heat and cold from seeping in, as well as blocking UV rays and scattering light to minimize glare on the pool surface.

These effects can also be eased through the use of retractable roof panels, which can allow as much as 50 percent of the roof to open or even more, depending on the design. Most are mechanically operated, though for an even more hands-off approach, some structures can also be built with sensors to adjust based on temperature and lighting specifications. Doors and windows, which can be either manually or mechanically operated, add additional ventilation options, increasing in effectiveness when combined with fans. "Just opening up the doors and windows may not be enough to provide a comfortable temperature on a consistent basis," cautions Hunsaker. "Most design solutions are going to require an HVAC system. It's very unlikely you can have an indoor facility that just uses natural ventilation."

Though a necessary addition to pool enclosures, HVAC Systems can be relied upon less heavily in conjunction with operable systems than in a completely indoor environment. "You could actually set your control system up with what we call limit switches," says Christopher Chivetta, president of Hastings+Chivetta Architects Inc. of St. Louis. "When you open a series of doors or open a roof, it makes the HVAC system aware so that it can shut off. If the indoor conditions get too out of control, the HVAC can notify the building operators that it's time to close the doors or roof."

During Alberta's pleasant but admittedly short summer months, Munro says the roof of Royal Glenora's aquatic center, which features three retractable panels operated by a hydraulic system, is generally kept open, along with the patio doors, allowing members to enjoy the pool as well as the natural environment. "We get more early-morning and later-evening swimmers," says Munro.

The benefits of an enclosed structure are most obvious in a colder environment, but any financial advantages can be negated by the costs of maintaining the pool environment. "The general climate conditions of a given area can really impact a pool," says Chivetta. "You have to be very aware of where your project is located when you're considering operable roofs, windows and doors."

An awareness of insulation, measured in R-value, is also necessary. Using an inappropriate insulation can lead to condensation issues, not to mention more costly heating and cooling. "Wall systems and roofs are typically of different insulation values," adds Chivetta. "You have a higher R-value in the roof structure because of the amount of heat that can be lost at night."

Royal Glenora's enclosure was designed with cold winters in mind. Even into the fall months, Munro continues to open one of the panels, as the design of the enclosure takes advantage of the greenhouse effect. "Reflectivity on the inside of a panel keeps the heat in during the winter months," explains Chivetta. "You want it on the other side in warmer areas."

"We'll use the sun and the venting as long as possible," Munro says. "As soon as we start falling below 0Â° Celsius, we no longer open the roof and rely on the HVAC system. But it certainly allows us a much longer season."

In warmer areas that are fortunate enough to enjoy favorable temperatures for most of the year, such as those in central California, the same insulation considerations can be applied to keep aquatic centers cool. And, of course, enclosures keep pools busy during inclement weather. Light and rain sensors can be used in conjunction with operable paneling and connected to the pool's HVAC system, opening and closing panels automatically as necessary depending on environmental cues.

When done right, pool enclosures allow operators and users to enjoy the benefits of the outdoors without being controlled by it. Moreover, under the right conditions, an enclosure creates opportunities that extend beyond aquatic use. Royal Glenora also utilizes the deck space for special events and other sports, as well as yoga classes, and in the coming year, monthly spa days, says Munro. "With the retractable roof and enclosed pool, we can keep the facility at a consistent and comfortable temperature at all times."