Demolition crews are clearing the way for a new arena in Allentown, Pa. The $157 million arena will feature seating for 8,500 hockey fans and serve as home to the Phantoms, a minor-league affiliate of the Philadelphia Flyers. 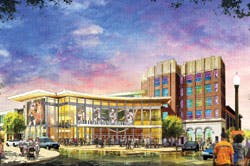 Demolition crews are clearing the way for a new arena in Allentown, Pa. The $157 million arena will feature seating for 8,500 hockey fans and serve as home to the Phantoms, a minor-league affiliate of the Philadelphia Flyers. The 360,000-square-foot arena will also seat up to 10,000 for concerts and other community events. Designed by Denver-based architectural firm Sink Combs Dethlefs, the venue will feature a two-story glass entryway with an emphasis on glass throughout.

In January, Diamond Bar (Calif.) High School broke ground on the Denis R. Paul Aquatic Center. The $10.75 million project, designed by Carlsbad, Calif.-based Aquatic Design Group in partnership with Henry Woo Architects of Diamond Bar, is expected to take two years to complete and will include a 12-lane pool, locker rooms, stadium seating with a shade structure and a two-story building to house 20 classrooms.

One year after it shut down in anticipation of beginning renovation, the $8.5 million upgrade of Plum Gar Community Recreation Center in Germantown, Md., has commenced. Annapolis-based architectural firm The Lukmire Partnership has incorporated the old center's gymnasium into the new center's design while adding new exercise, multipurpose and game rooms, as well as a catering kitchen and computer lab. When the center reopens in 2013, it will have more than doubled in size.

Work will begin this month on a new youth sports complex in Tracy, Calif. The city will be responsible for an initial $6.9 million outlay for construction of parking lots, sewer and water lines, street alterations and land grading of the 150-acre complex. Once the first phase of construction is complete, local youth groups will lease the partially developed land and take responsibility for installing turf, sprinklers, bleachers and other equipment to make the fields sport-specific.

Waverly (Ohio) High School is making room for a new athletic complex. The school's Raidiger Stadium was torn down in December, and fundraising is under way for the $1.2 million project, which will incorporate a new field house, grandstand, restrooms and locker rooms. . .

Rice University's board of trustees has approved construction of a new $44.5 million football facility adjacent to Rice Stadium. Training and locker rooms, a sports medicine center and staff offices will be housed within the 80,000-square-foot facility, and the project will also include replacing restrooms and ticket booths in the stadium. . .

Utah State University is in the fundraising and design phase of a new strength and conditioning center. The proposed facility will cover 18,000 square feet, almost tripling the size of the old building. An anonymous donor has already pledged $5 million toward the $6.2 million project. . .

The Madison County School Board in Richmond, Ky., is seeking state approval for a $4.5 million upgrade to Central High School's sports facilities. The proposed project would replace the football field with synthetic turf and add a new track, restrooms, concessions stands and 4,000 additional stadium seats. . .

The University of Connecticut has raised nearly half of the funding needed for a new $30 million basketball development center, thanks to a record $4.5 million private donation from Peter and Pamela Werth. The 70,000-square-foot facility is being designed by Populous Architects and will host dedicated practice space, locker rooms and coaches' offices for the school's two basketball programs. 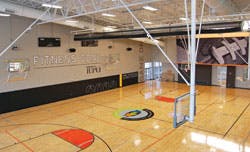 A part of the 2012 Super Bowl Host Committee's Legacy Project, the Chase Near Eastside Legacy Center opens this month. Built on Indianapolis' Arsenal Tech High School campus, the $11 million community center offers students and members of the community a full-service fitness facility, a media studio, a computer lab, and a greenhouse and garden. Designed by RATIO Architects of Indianapolis, the 27,000-square-foot center will be LEED certified. . .

The Pacific Sports Center is scheduled to open this month in Tacoma, Wash. The 52,000-square-foot sports center houses two indoor soccer fields, the foundation for which is crushed gravel instead of traditional concrete, allowing for softer landings and faster play. The center offers seating for 1,200 and is capable of hosting other local sports leagues, including those serving lacrosse, football and baseball. . .

The University of Texas at Arlington celebrated the completion of its $78 million College Park Center with a men's and women's basketball doubleheader this month. The center will be the home of the school's basketball and volleyball programs, and will also welcome conferences and other events hosted by the school and the City of Arlington. Designed by architectural firm HKS Inc., headquartered in Dallas, the building is marked by a highly reflective metal roof and large windows that bathe the entrance with natural light and contribute to the building's expected LEED Gold certification.