The University at Albany (above) plans to break ground this month on a new athletic and recreation complex.

The University at Albany plans to break ground this month on a new athletic and recreation complex. Over the next two years, the $24 million project will add a synthetic turf field for recreational and intramural use, replace the current soccer field with a football and soccer stadium, replace the current track and add areas for field events. Designed by Heery International, the stadium will be modular, allowing for possible expansion.

Hudson (Ohio) Athletic Boosters Club Inc. broke ground last month on Hudson Memorial Stadium and expects to complete the project by mid-August, at which time it will be signed back over to the Hudson School Board. The $5.5 million stadium, designed by OSports of Cleveland, will seat 5,000 and feature a synthetic turf field. The project will also include construction of a track, and any excess funds raised will go toward an eventual second phase, which will add a visitors' locker room and a multipurpose room overlooking the field.

Continuing a flurry of construction that began with a multiuse turf field complex and athletic weight room and training center, Le Moyne College broke ground this month on a softball complex. The natural grass field will be flanked by brick dugouts and feature a customized scoreboard. Appel Osborne of Syracuse, N.Y., is serving as lead architect on the project, which is expected to be completed by late summer.

Construction of Penn State's Pegula Ice Arena is under way. The 200,000-square-foot arena will provide seating for 6,000 and host the school's Division I men's and women's ice hockey teams as well as NHL exhibition games, USA Hockey tournaments, figure skating competitions and public skating events. Designed by Crawford Architects of Kansas City, Mo., in association with Bohlin Cywinski Jackson of Wilkes-Barre, Pa., the $112 million project is expected to be LEED certified.

The Fox Valley Park District in Montgomery, Ill., has begun construction on an expansion to its Stuart Sports Complex. The 135-acre expansion will add four lighted baseball diamonds and 11 soccer fields. The $8.6 million project will fully open for play in 2014.

Niles North High School in Skokie, Ill., broke ground this month on an aquatic center addition. The future home of the boys' and girls' swimming and diving teams will feature a 25-yard pool and separate diving well and include seating for 500. The $12 million project, designed by Chicago-based Legat Architects, will also include a renovation of the school's existing pool and locker rooms and is estimated to take 15 to 18 months to complete.

Concord (Mass.) Academy is currently constructing a new athletic campus to replace its existing sports fields, which suffer from yearly flooding. The project requires the demolition of five buildings (80 percent of the materials will be recycled), to make room for two athletic fields, a baseball diamond, six tennis courts, a simple shelter for teams and fans, and two parking lots. The school hopes to complete the $7 million project prior to the start of the 2012-13 school year.

The Green Oak (Mich.) Township Planning Commission is considering a rezoning request that would allow for the construction of a large recreation park. Proposed by Michigan Rehabilitation Specialists, Legacy Recreation Park would include indoor and outdoor fields for soccer, baseball, softball and lacrosse, as well as physical therapy facilities. . .

The YMCA of South Hampton Roads in Virginia Beach, Va., is currently working on plans to build a $14 million fitness center. Set to be completed by 2015, the 45,000-square-foot facility will include fitness space, as well as add one indoor and two outdoor pools. . .

Franklin & Marshall College in Lancaster, Pa., has received a $5 million donation to partially fund a $17 million multipurpose stadium. The college is working with HKS Inc. of Richmond, Va., on the project, which will include a stadium with seating for 3,500, a synthetic turf field, a press box, concessions stands and locker rooms. The project is still in the developmental stages, though the donation allows the school to begin site assessment. . .

A Vallejo, Calif., couple is in the process of raising funds and getting city council approval for a proposed Building Effective Youth Center, which would include a roller rink and basketball courts, indoor football and baseball fields, an indoor playground and space for community events. . .

The Greater Wichita YMCA is currently seeking to raise $5 million from the community for the construction of a $15 million regional recreation facility in Newton, Kan. The two-story facility will include fitness areas, an indoor track, two gyms, an aquatics center, racquetball courts and multipurpose spaces. 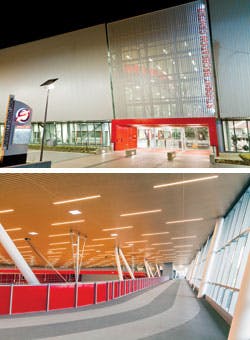 The Florida Marlins opened their season in a new home this month. Marlins Park features a retractable roof, seating for 37,000 fans and numerous suite options. Design firm Populous incorporated elements of Miami's coastal landscape throughout, including two aquariums behind home plate and a swimming-pool suite. The stadium is anticipated to earn LEED Gold certification. . .

The community of El Monte, Calif., celebrated the grand opening of the long-awaited Gibson Mariposa Park last month. Planning for the 4.3-acre, butterfly-themed park began nearly a decade ago and is the community's first new park in six years. The $3.6 million project features a splash pad, basketball courts, picnic areas and a small amphitheater.