(June 16, 2021). The Girls Academy (GA) announced the renewal of InStat as the league’s Official Video Analysis provider in a multi-year sponsorship.

InStat will return as a top sponsor for the GA in the data analytics category for the 2021/2022 and 2022/2023 seasons. InStat will contribute substantial sponsorship investment each year to the GA and have increased usage from GA members. InStat will continue to see activations at GA events and have specialized digital campaign programming, giving InStat nation-wide exposure and quality engagement opportunities with GA membership. 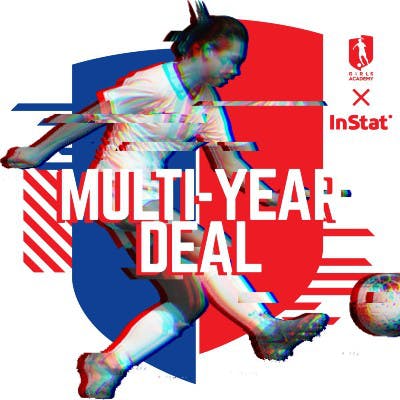 “In the first year of the Girls Academy, InStat has been an incredible partner in every sense of the word,” said GA Commissioner Lesle Gallimore. “During a time when players and coaches were struggling to showcase their talents, find ways to continue to develop and hone their games, InStat stepped up each and every week for our clubs and players. We're ecstatic to move forward into the future with InStat as they truly set the industr standard for video analysis and technology. The personalization of their customer service sets them apart.”

During the 2020/2021 season, InStat provided a complimentary league exchange platform for all of the teams in the GA - giving teams and players the ability to access player development tools. InStat gave around the clock support to GA members to ensure optimal utilization at a time when digital resources were most important for players to be seen during the pandemic and NCAA recruiting dead periods.

"We, at InStat, are excited to continue our relationship with the Girls Academy and proud of the relationship that we have established", said Mark Yates, North American Director of InStat. "Our platform, the data and video within, can serve as a tremendous development tool for coaches and players, while also providing all players with maximum exposure to the higher levels of soccer. We look forward to being a tremendous partner."

The GA is the only all-girls national youth soccer platform in the United States, currently with 7 conferences, 69 clubs and growing to 8 conferences, over 79 clubs next season. The GA playoffs, GACA21, kickoff later this month in Oceanside, CA, where teams will compete to earn a spot in the finals in July. For more information visitwww.GirlsAcademyLeague.com or email media@girlsacademyleague.com.

About the Girls Academy (GA): The GA is the leading youth development platform for the best female soccer players in the United States, which includes 7 conferences, 69 clubs, and over 7,500 players across the nation - expanding to 8 conferences and over 79 clubs next season. The GA is the national youth soccer platform that actively engages the voice of the players and clubs to take real ownership in the GA. This collaborative philosophy creates a culture guided by a shared set of core values, which produces an unparalleled experience uniquely designed in the best interest of the players. The GA embraces the desire of club members and GA players alike to maintain an unrivaled standard of excellence in coaching, competition, and regional and national showcase events throughout the year. The GA is committed to cultivating an environment that empowers each player to reach their best potential as an exceptional athlete and human being by celebrating the player's journey with a lifelong love of the game through competition, showcases, and camaraderie.