Growing up, I always dreamed big and knew with hard work I could make things happen. Maybe not on the first or second try, but after attempting something countless times, I knew I could accomplish just about anything. Today, I am a husband, swimmer, coach, 2016 Rio Paralympic medalist, and the first blind coach in USA Swimming and NCAA history. 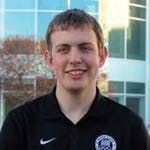 I began swimming at age nine. I liked it at first but wasn't sure if I loved it after the novelty wore off. For several years, I would ask my dad if I could quit, and he would simply tell me to finish the season. The season would come to an end, and I was always still there. Around the age of 14, I started to realize how much I loved the sport.

Just a little over a month before my 15th birthday, on Nov. 13, 2007, my life changed forever. I was diagnosed with retrograde and anterograde amnesia. A few months later, on Feb. 23, 2008, I started to lose my eyesight, and by June 3, 2008, I had lost my sight completely. At the time, I could remember new things but struggled greatly to remember anything in the past. My life was irrevocably changed, but with my faith in God, I knew that this was just a page in my life's story, and God had a plan.

One of my greatest lessons in perseverance came after less than six months of blindness. On the way home from a swim practice, my dad began giving a speech about how we could do anything to which we put our minds. He pulled over on the side of the road and told me to get out and find my way home. My mind raced. I had no idea where I was, but I'd had many swim practices where I felt that way, and I treated it the same as I would one of those practices. Two hours later, I walked angrily into the house. My dad met me at the door, saying, "I told you that you could do it!" A couple years later, my dad would tell me that he'd followed closely behind me the whole way to ensure my safety. That was one of the greatest things my dad ever did for me.

I've carried that lesson with me everywhere I go. For the 2012 London Paralympic Games, I missed the team by one spot. That night, I applied to live at the Olympic Training Center. I spent the next five and a half years there. With each passing year, I made a little more progress, and in 2016, I qualified for the Rio Paralympic Games.

At the 2016 Games in Rio, I remembered all those years of adversity and realized it was time to turn that struggle into greatness. I went on to win the silver in the 100-meter breaststroke SB11 and 400-meter freestyle S11. I learned a great lesson from my now wife, Paula, after being disappointed with silver. Be happy, but not content, she told me, and at the 2017 World Championships, I went on to win the gold in both events, along with a silver in the 200-meter individual medley.

My journey in swimming didn't end there. In early 2018, my wife was researching schools and came across Catawba College. I told her if she decided to attend school there, I wanted to be involved with the swim team. I emailed the head coach, Michael Sever, and told him my story, saying if possible, I would love to volunteer and help out. He was at the NCAA Championships with a swimmer and said he'd call me upon his return.

After discussing everything, Mike wondered how I would be able to coach if I was blind. I told him that he would be amazed with what I could do with my hearing. Over the years, I've learned how to differentiate strokes and technique using sound. I'll give the team an advantage, I told Mike, because I am an embodiment of what many believe to be an impossibility — a blind swimming coach.

Mike offered me the job as assistant swimming coach with Catawba College, and we went on to have a very successful 2018-19 season, showing the world I was just another coach, who just happened to be blind.

Over the years, I've learned that something is only impossible until someone does it. We are all capable of greatness. It's important to occasionally take a leap of faith, because you never know what God has in store for you, and only God knows what's to come.

This article originally appeared in the April 2019 issue of Athletic Business with the title "INSERT ORIGINAL TITLE HERE." Athletic Business is a free magazine for professionals in the athletic, fitness and recreation industry. Click here to subscribe.