A fatal traffic accident sends a Kansas court down the wrong road. 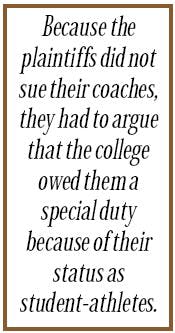 These were just some of the issues the Supreme Court of Kansas was asked to address in Howell v. Kansas Newman College [1 P.3D 310 (Kan. 2000)].

Angie Howell was attending Kansas Newman on a basketball scholarship. As a member of the basketball team, Howell was required to participate in mandatory physical conditioning sessions.

One of these sessions was a Friday-morning, 2.7-mile run. The team had agreed to run in the morning to free up Friday afternoons, and the route was designated by the head coach and used by many of the Kansas Newman athletic teams. The coach required the team to run this route even though portions of the route were heavily trafficked and without sidewalks.

On the morning of Sept. 15, 1995, the team began its run at 6:30 a.m. No member of the coaching staff accompanied the runners. At approximately 6:46, Howell and another basketball player, Kimberly Rothlisberger, were hit from behind by a truck. The two were running side-by-side in the road, with Howell nearest the curb. Howell was struck by the truck's passenger-side mirror. Rothlisberger, who sustained the major impact, was killed. Passing motorists testified it was too dark to see the runners in the road.

Howell and Rothlisberger's estate sued the college and the truck driver for personal injuries and wrongful death, claiming that they were negligent in causing the injuries. The driver of the truck settled with the plaintiffs before trial, leaving the college as the only defendant in the case.

Interestingly, Howell did not sue her coaches, even though the courts have made it clear that coaches have a duty to minimize the risk of injury to all participants-to provide their athletes with a safe training environment and to protect them from any foreseeable risks. There is evidence that both Howell and Rothlisberger had asked the assistant coach if they could run a different route. The coach, however, told the athletes that they had to run the same route as everyone else.

If Howell or Rothlisberger's estate had sued their coaches under negligence theory, all they would have had to prove was that the coaches breached the requisite duty of care.

Also, even if the plaintiffs sued the coaches, they would still have been able to seek damages against the college under the theory of vicarious liability.

Under this theory, if a coach is negligent, the college that employs the coach may also be held liable, since the coach is an agent for the college and controls the actions of the student-athletes.

Because the plaintiffs did not sue their coaches, however, they had to argue that Kansas Newman owed them a special duty because of their status as student-athletes. The special duty, Howell argued, involved proper supervision, instruction, warning, a safe place or premises for the required activity, and safe equipment. The college argued that it only owed a general duty of ordinary care, claiming that there was no special relationship between the school and the student-athletes.

Following a three-week trial, the jury apportioned fault in each case as follows: The athletes, 28.6 percent; the truck driver, 46.6 percent; and Kansas Newman, 24.8 percent. The jury awarded $75,075 in total damages to Howell and $255,000 in pecuniary damages to Rothlisberger's estate.

Howell appealed the decision, focusing primarily on jury instructions concerning the duty owed by Kansas Newman to its student-athletes. In rejecting Howell's duty-of-care argument, however, the Supreme Court of Kansas held that the plaintiffs' contention was misdirected. According to the court, the only duty Kansas Newman owed the students was ordinary care.

The parents argued that a special relationship existed between the student-athlete and the college, which imposed a special duty of care on the school. The parents further argued that although a heart attack might be unforeseeable, it was foreseeable that student-athletes could suffer some harm during practice that might require medical assistance.

The Third Circuit Court, in overturning the district court in Kleinknecht, ruled that colleges owe their student-athletes a special duty based on the existence of a special relationship. The court found that this was particularly the case when a college utilizes a student-athlete to help generate interest in the school.

The Third Circuit emphasized three important factors-Kleinknecht was actively recruited by the college to participate on its lacrosse team, he was at the time of his collapse acting in his capacity as an athlete rather than as a private student, and that the risk of harm in this case was both foreseeable and unreasonably significant.

The Supreme Court of Kansas, however, unlike the court in Kleinknecht, held that there was no special relationship between the college and its student-athletes.

In reaching this decision, the court declined to consider any of the three factors laid out in Kleinknecht. For example, even though both plaintiffs were recruited by Kansas Newman and received scholarships to play basketball, the Howell court did not deem this fact important enough even to address. (This is especially interesting given that Gettysburg College is a Division III school that does not offer scholarships, whereas Kansas Newman not only recruited both Howell and Rothlisberger, it awarded both of them athletic scholarships to attend the college.)

Nor did the Kansas court note that Howell, like Kleinknecht, was clearly acting in her capacity as an athlete at the time of the injury. On the issue of foreseeable and unreasonably significant risk, the Kansas court also remained mute, even though it was foreseeable that someone running in earlymorning darkness on a heavily trafficked road without sidewalks was subject to an unreasonably significant risk of harm.

The courts (absent those in Kansas and Utah) have increasingly recognized that student-athletes have a special relationship with colleges, although generally that private students do not. As noted by the court in Kleinknecht and by subsequent courts, when students are also athletes, the relationship between the college and the student changes. One of the main reasons for this is the mutual dependence and benefits both parties receive from the relationship.

One of the ways colleges profit from athletics is increased attendance at sporting events, which in turn attracts corporate sponsors. The student-athletes also generate school enthusiasm, facilitate recruitment and attract regional and national media exposure. Studentathletes therefore help generate both an economic and non-economic benefit for the school.

Some other differences between student- athletes and private students involve the control the college has over student-athletes. For example, Howell and Rothlisberger's request to run a different route was rebuffed by the assistant coach, even though the coach knew another team member had injured her ankle by stepping in a pothole while running the prescribed route one week earlier.

In addition, athletic departments control virtually all aspects of the lives of student-athletes, including social activities and academic decisions, while student- athletes enjoy benefits such as a free or reduced-cost education. These distinctions between student-athletes and private students have led the majority of courts that have addressed the issue to logically characterize the relationship between colleges and student-athletes as special.

In spite of the Kansas court's decision, which represents a significant departure from case-law precedent, athletic administrators still need to consider the duties owed student-athletes because of their special relationship.