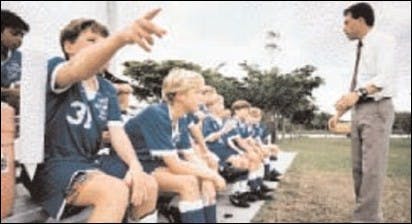 More than one million volunteer youth sports coaches have been trained and certified by the National Youth Sports Coaches Association (NYSCA) since the coaches' program began in 1981. Of the approximately 2,200 NYSCA chapters through which volunteers participate, 25 percent are affiliated with boys' and girls' clubs, YMCAs, police athletic leagues and other independent sports organizations. The other 75 percent are affiliated with city or county parks and recreation departments, which Mike Pfhal, national executive director of the NYSCA, says have been "the mainstay of providing education and training to coaches through the NYSCA program."

Last year, Camden County, N.J., was in a typical situation regarding its youth sports coaches. Many of the area's municipalities were running the NYSCA program, but only for their own leagues. Others, especially those without full-time recreation staff, were struggling simply to recruit volunteers.

Seeing an opportunity to help combine these efforts and in turn grow the number and quality of the volunteer youth coach base county-wide, Camden County became a certified chapter of the NYSCA, and the first to be operated by a health and human services department.

Says Pfhal: "To have a county health services department recognize the emotional, physical and social benefits of youth participating in sports under the trained supervision of a coach - and be willing to run and fund the training program - that's unusual."

As a chapter, the department was able to incorporate aspects of health and human services with the NYSCA program to develop a comprehensive one-day coaching clinic. The free clinic, held in the summer, was open to anyone interested in coaching youth sports.

"They went all out to create a meaningful experience for the volunteers," says Rich Bakker, executive director of the NYSCA of New Jersey. Along with NYSCA video training sessions and sport-specific training and certification, the clinic included a welcoming speech from a well-known local youth coach, question-and-answer sessions, and exhibits.

The chapter waived the $15 certification and membership fee for all attendees, covering the cost through the departmental budget and with money donated by local businesses.

Response to the clinic was overwhelming and the chapter certified about 125 coaches that day.

"The NYSCA program is typically done in small groups of a dozen to 15 coaches at a time, so 125 is a very big deal," says Deborah Orem, an aide to Frank Spencer, the county leader behind the new chapter and its activities.

The idea, Orem says, was to take the excellent package provided by the NYSCA and supplement it to further break down the barriers that affect volunteerism in youth sports.

"More people would get involved in kids' sports if they felt they had a little more information on how to do it," says Bakker, who teaches sports sociology courses at Kean University in New Jersey.

With one successful clinic behind them, Camden County is working on plans for its next one-day event, to be held this month at another local high school.

"Based on feedback from the first clinic, we're offering the next level of certification for returning coaches," Orem says. "We'll also have basic-level training for new attendees and coaches who want to certify in a second sport."

In addition, the clinic will feature more question-and-answer opportunities and an expanded exhibit area that will include American Red Cross first-aid demonstrations, sport-specific demonstrations from high school coaches and information on youth nutrition, sports medicine and alcohol and drug abuse.

"Our goals to promote volunteerism and increase awareness of safety in youth sports are already being met. Our intentions now are to continue that by offering clinics throughout the year and slowly begin to certify our own clinicians," Orem says. "Eventually, we'll be able to bring the program back to the municipal level by taking the clinic to them."

"This chapter has come a long way already from the basic clinic NYSCA offers," says Bakker. "And I think they've just touched the tip of the iceberg."