A booster club's fund-raiser prompts some soul-searching in Missouri. 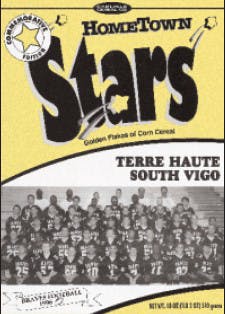 Each time corporate money has crept closer to the heart of what Americans find "pure" about athletic competition, they've let out a collective yelp. Advertisements in the official program, promotional announcements on radio and TV, billboards in sports venues - each had its detractors long before (1) apparel logos (2) started showing up on team uniforms (3) worn by athletes playing in tournaments named for official sponsors (4) held in venues named for corporations.

As the most pure of an increasingly impure lot, high school sports remains for many people an oasis in a desert of avariciousness - the one athletic realm, now that the Olympics have gone wholeheartedly corporate, that is not for sale, at any price.

But the reality of dwindling resources for extracurricular activities intrudes on even those athletic administrators who see themselves as student-athletes' last line of protection. Administrators such as Darwin Rold, district AD of the Lee's Summit (Mo.) School District.

Rold found himself in the midst of a minor controversy last fall after the local booster club contracted with Bismarck, N.D.-based Carlisle Cereal Company to market a brand called HomeTown Stars at the HyVee supermarket in Lee's Summit. Carlisle markets HomeTown Stars to athletic departments as a creative and popular fund-raiser: The athletic department provides pictures of its athletic teams, the company prints the pictures on boxes of cereal, the supermarket sells the cereal and everybody gets something they want. In the case of Lee's Summit, roughly 1,500 boxes of cereal were sold at $5 per box. Carlisle made its regular profit margin, HyVee got highly positive local publicity and increased walk-through traffic, and the booster club got all the profits donated by the supermarket - $1.11 per box, according to booster club President Pam Kreher.

Trouble is, according to Rold, the booster club failed to inform him of its plans.

"We work with them on a yearlong range of fund-raising projects, including concession stands, hosting of invitational tournaments, things like that," Rold says. "But this caught us a little bit by surprise."

Kreher says the club ran the idea by the football coach at one of the district's two high schools after the parent of a football player saw HomeTown Stars on the shelves of a Des Moines, Iowa, grocery. Each box of HomeTown Stars sold in Lee's Summit thereafter featured the school's athletic logo and photos of the varsity and freshman football teams, the varsity cheerleading squad and a group shot of the marching band, drill team and color guard. "We thought, the more people you put on the box, the more families are going to want to buy it," Kreher says.

Trouble is, according to officials of the Missouri State High School Activities Association, nobody informed them about it, either. The day newspaper clippings about the fund-raiser reached the MSHSAA office in Columbia, administrators on its board of directors began to get nervous.

Explains MSHSAA Executive Director Becky Oakes, "The whole scenario set the wheels in motion for our schools to evaluate how far we want to open the door so businesses can utilize these high school athletes. Were we getting to the point where athletes were actually endorsing a product? We felt we might be crossing that line."

As it happens, Rold agreed with the state association's cautious stance.

"They have their rules," he says. "I understand where they're coming from, because we're all there to protect kids, and no one wants the kids to be prostituted, so to speak. We don't want them taken advantage of. We're not a marketing tool for corporations."

And yet, Rold works with the booster club to develop corporate golf outings that benefit his department, as a complement to the many coupon book sales and pizza bakes they run. In addition, he helped negotiate a seven-year contract with a soft-drink company that gives it exclusive pouring rights in the district. Add to that the official basketballs, footballs, baseballs and volleyballs schools must use in MSHSAA tournaments from the district championships on, and corporations already have quite a foothold in Lee's Summit schools.

"We're dictated by corporate sponsors whether we like it or not," Rold concedes.

Initially, the association's board of directors told Lee's Summit that while it could sell whatever cereal remained, it could not continue to participate in the program. Oakes says there's nothing philosophically inconsistent with the MSHSAA taking this approach while continuing to sell tournament naming rights and official-ball status to corporations.

"We're a business, and we have an opportunity to do that," Oakes says. "But the students aren't put in a position to say, 'I like to play with XYZ basketballs.' We don't use the students in any way."

HomeTown Stars troubled the MSHSAA for a variety of reasons. For instance, despite HyVee's donating all profits to the booster club, the supermarket was benefiting by selling something with the name of the school and team on it. "This third party has everything to gain and nothing to lose," Oakes says. "It's a case where you've got a middleman, if I may use that term, where another business makes money off the kids, and that money doesn't have anything to do with the school."

The board's major concern was the element of product endorsement introduced by the photos showing the team members wearing their school uniforms. By-Law 231, the MSHSAA's amateur award standard, says that a student may not receive any type of cash, nor a merchandise item that exceeds $25 in retail value, as an award for participation in high school athletics. It's a rule intended to protect not only the "purity" of high school amateurism, but the students' NCAA eligibility as well.

Oakes is quick to point out that the board subsequently determined that the HomeTown Stars fund-raiser does not violate By-Law 231 or any other MSHSAA standard. But these days, she says, you can't be too careful. Last year, a company that markets an on-line sports update service approached several schools saying that it wanted to honor an "Athlete of the Week" with a photo and story that could be accessed on the Internet - along with a plug for its own services. In addition, an increasing number of schools and booster clubs are selling phone cards that bear a picture of the athletic team supported by the fund-raiser.

The MSHSAA intends to spend this year evaluating the various marketing schemes entering the high school athletics realm as a way of giving its members guidelines to use when corporations come calling.

"We're going to try to help the schools a little bit, because money's tight and people have to become more creative," Oakes says. "We certainly don't want to develop any rules that would prevent schools from being able to raise the funds that they really need to supplement their budgets. But at the same time, we don't want to let kids get exploited."

As for HomeTown Stars, the publicity generated in Lee's Summit has led several other Missouri schools to contract with Carlisle for next fall. "We've cleared everything up with them," Oakes promises. "We didn't want to close doors unnecessarily."

Rold feels the whole issue was overblown. "It wasn't that big a deal to me," he says. "It was unique, but it wasn't our booster club's biggest moneymaker. Moms and dads bought lots of boxes for the family. But did all the other people in the town rush out to buy it? No. I didn't even go buy one myself."