Interest in adult dodgeball is growing, thanks in part to a popular Hollywood film 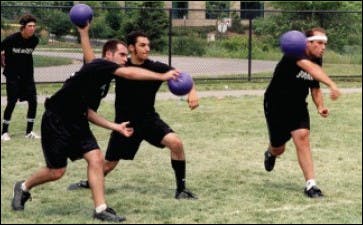 On June 18, the satirical send-up, "Dodgeball: A True Underdog Story," premiered on theater screens nationwide, revitalizing a generation of former dodgeball players and producing countless anecdotes of playground heroism or horror, depending on the storyteller. Media stories, meanwhile, reported on the birth of modern-day dodgeball social clubs in cities like Los Angeles, Portland, Seattle, Fort Worth, Texas, and Raleigh, N.C.

But even before the movie's debut, dodgeball enthusiasts could be found in various places throughout the United States. Gary Parsons, recreation supervisor at E.P. "Tom" Sawyer State Park in Louisville, Ky., started that city's first adult dodgeball league in March. Through the first five months of the program's operation, Parsons had run three separate "seasons," each lasting anywhere from six to eight weeks and concluding with a tournament. Six teams of six to 10 players participated each season.

Parsons says he was inspired to add a nontraditional activity after a local recreation department started a kickball league. "I thought about all the games I used to play in grade school," he says. "I picked dodgeball because I was good at it."

Adults who have fond memories of the game aren't the only ones eager to revisit their childhood. Players of all kinds - including those who, as youths, more often found themselves on the receiving end of a classmate's well-aimed throw - are participating in adult dodgeball leagues or attending national tournaments hosted by the Schaumburg, Ill.-based National Amateur Dodgeball Association (NADA).

The organization, created five years ago by employees of the Schaumburg Park District, has since evolved into an affiliate of - and a reliable revenue source for - the park district. NADA has sold official game equipment, rule books and agency memberships to groups in Dallas, New York City, San Antonio, Atlanta and Rock Springs, Wyo. Agency members, in return for paying a $200 fee and pledging to promote the NADA brand in their local areas, receive a supply of rule books and T-shirts, and are prominently featured on the NADA web site. "A lot of the growth is from word of mouth," says Bill DePue, vice president of NADA and manager of the Schaumburg Park District's Meineke Recreation Center. "All we ask is that people use our rules."

NADA makes most of its money, though, from collecting registration fees ($100 per team) for its seven tournaments held throughout the year, which according to DePue, have each drawn an average of 70 teams the past two years. For each of this season's major events (an outdoor tournament was held in late July and a winter event is scheduled for next January), DePue expects 100 teams to participate, crediting the flurry of press that preceded the "Dodgeball" release for putting a brighter spotlight on the game and his organization. "Our web site [www.dodgeballusa.com] got 2,000 hits a month before the CNN.com article came out in May. Since then, we've had days in which we get 4,000 hits," he says. "In the past six months, there has definitely been a huge growth in interest and awareness of the sport - and we do call it a sport."

There are some individuals who might cringe at the use of that term. Throughout the 1990s, critics of dodgeball in elementary and middle school physical education programs cited the game's lack of exercise benefits (particularly when players who are tagged out must stand idle on the sidelines until the start of the next game) as a valid reason for eliminating the game. Other critics claim it fosters a bully mentality among certain youths.

Eastern Connecticut State University's Neil Williams - who in the early '90s condemned dodgeball as the first inductee into "The Physical Education Hall of Shame," a series of articles he authored for AAHPERD's The Journal of Physical Education - was perhaps the most outspoken of those critics. Today, he wonders if dodgeball's resurgence as an adult recreational activity is a negative phenomenon, not necessarily in the physical sense, but socially. "I'm kind of surprised at the way the whole movement has been embraced by adults," says Williams, chair of ECSU's Department of Health and Physical Education. "People seem to be so angry and frustrated that they feel the need to go bash other people in the head with a big rubber ball."

Williams would rather believe that adults who participate in dodgeball leagues are really just hoping to meet people and get some exercise. "We see an awful lot of people who get into their adult years with no sports skills whatsoever. My argument used to be that children in schools should be exposed to sports and activities that they'll be participating in as adults. Baseball and basketball has been the norm for the past 100 years," he says. "But now people are playing dodgeball as adults and I don't know what to say. I mean, in dodgeball, there is jumping, catching and all kinds of moving around."

Parsons says that's part of what makes dodgeball so attractive. "It's a very good aerobic exercise," he says. "It's not like the old way, where you stood against the wall and everyone threw at you. If you play open style like we do, all you do is run."

With all that running, games are generally very short, lasting only two to five minutes on average. "In our first session, we played only three games per match, and it was over too quickly," says Parsons. "We've since changed it to five games per night, but we're still done in 30 minutes."

The rules Parsons's league uses are quite similar to those of the children's version of the game, save a few alterations. At Sawyer State Park, adult dodgeball is played indoors on a volleyball court divided into two zones, one for each team. At least four players from each team are forced to stay inside its zone, where they must dodge a ball thrown by one of two players from the opposing squad, called "floaters." If a player gets hit before the ball hits the floor, he or she is called out. However, if he or she catches the ball, his or her team takes possession and can begin targeting the other team. When all players but one on a given team are eliminated, that team's floaters are allowed to reenter the contest in a last-ditch effort to defeat the other squad.

Parsons has tried to incorporate other variations in attempts to increase the amount of action in each game. "Last session, we added a second ball to the game, but I didn't like that," he says. "If the floaters on one team get both balls, the other guy doesn't have a chance."

In addition to throwing, catching and running, dodgeball involves a fair amount of strategy. "The ball I'm using in our league is extra soft. It's a foam ball with a rubber coating," says Parsons. "The ball curves when you throw it hard, so it's actually better to throw it soft."

NADA also incorporates softer equipment (an 8 1 / 4 -inch-diameter foam ball) than the hard rubber balls many adults might remember from their school days. "We've always said there are three ways to keep this game safe," says DePue. "Make sure you use the proper equipment, make sure you have proper supervision and make sure the proper rules are in place."

Among those rules: no targeting of players above their shoulders. "We haven't had any ball-related injuries in five years," DePue says. "We're all about making it a fun activity."

For that reason, DePue predicts dodgeball will continue to grow in popularity. As more groups inquire about purchasing NADA agency memberships, DePue and his staff are contemplating implementing a regional tournament system that would feed into the national championships in Schaumburg. If that were to happen, NADA might finally be able to separate from the Schaumburg Park District and become self-sufficient. "Originally, this was supposed to be a one-time event," says DePue of NADA's origins as a family fun weekend hosted by the park district. "But people came away wanting more, asking us when we were going to do it again. It has turned into a monster."